Do You Know How Many Children Boris Has?

Today I was giving a talk within the University about building an inclusive workplace; more than just about gender, of course, but that is where the majority of my experience lies. There are so many obstacles, big and small, which prevent inclusion for minorities of all sorts. They need articulating; to be evidenced, accepted and acted upon by those with the power to effect change. The trouble with a talk like today’s was – talks not being mandatory in most cases in most departments in most universities – the audience had of course self-selected and, in this case, the vast majority were women. This was not a physics department, needless to say.  But how do you build an inclusive environment when only half the workforce turns up? I will return to this below, but first a slightly surreal moment as I was tweaking the talk beforehand.

One of my slides contained the bullet point 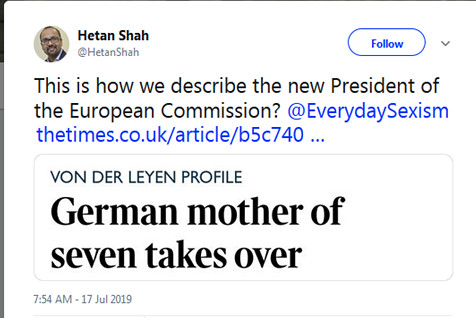 What kind of time warp are we living in? That headline harks back to the dark ages of 1964 when the award of the Nobel Prize in Chemistry to Dorothy Hodgkin was greeted with a series of headlines that, I would like to think, were pretty dodgy even then. They ranged from The Daily Telegraph’s

to the Daily Mail with its even briefer headline

affable-looking housewife Mrs Hodgkin” had won the prize “for a thoroughly unhousewifely skill: the structure of crystals of great chemical interest.

(The use of the title Mrs is itself pretty demeaning.) That, as I say was 1964, yet more than 50 years on we don’t appear to have progressed as much as one might have hoped.

How can a senior woman’s child-bearing history ability possibly be relevant to this new role as President of the EU? And, as the title of this post questions, would such a message be headlined regarding a man? I think the answer to that is emphatically no. After all, do you know how many children our possible next Prime Minister has, born in or out of wedlock, and by how many women? Do you care? Should you care? Aside from any message you may extract from his child-getting history about his morals, what is the relevance? If it is relevant for a woman it is relevant for a man. And if it isn’t of interest in the case of Boris Johnson, can we please shut up about the women too.  So, the bullet point in my talk stating ‘We need to re-evaluate how society values women and their actions’ feels just as pertinent in the world of politics and the media, although that was not where my talk was heading.

However, as long as the press think it is OK to focus, not on Ursula von der Leyen’s experience and qualifications for the Presidency of the EU, we are clearly not going to make much headway in changing our culture in our workplaces, schools or places of political decision-making. As long as half a department’s staff feel that it is OK to pay no heed to discussions about building an inclusive workplace, an inclusive workplace is not likely to materialise. Yet, it is equally the case that mandatory training is no silver bullet either; I highlighted this in the case of unconscious bias training recently. Progress needs to be made, one drip at a time, by pushing the conversation forward, engaging more and more parts of the workforce regardless of gender identification, colour of skin and so on. Some people (and typically it’s the minorities bearing this burden) get pretty burnt out doing this, but it’s hard to see what the alternative is in the short term. More allies are needed – step up, readers, please; share the burden.

Furthermore, as long as transgressors not only look the other way when training is offered, but face little by way of sanction when inappropriate actions (if not actual criminal acts) are identified, we will remain stuck in an environment where there are too many victims who feel there is no justice for them. Will the Warwick rapechat scandal facilitate more thought being applied to the daily environment and processes to resolve harassment issues for students and staff at Warwick? One would like to think so, although clearly one of the victims in this case has little confidence that lessons have been learned.

If processes can be so badly carried out by inexperienced and untrained ‘investigators’ as appears to have been the case in Warwick as the report about the process makes clear, universities should not be surprised if trust in the system is not high. If the leadership doesn’t recognize when things have gone astray swiftly, if they look the other way and believe what they want to believe, they should not be surprised if they are criticised. Transparency can be hard to achieve where disciplinary affairs are concerned, but lack of transparency unfortunately leads to suspicion and – if NDAs are not in place, and there should be no need for them – stories have an unfortunate (or possibly fortunate, depending on your viewpoint) habit of escaping into the public domain. Think Geoff Marcy, for instance, to choose a well-documented American example. Harassment and bullying is alive and well in universities, as I’ve written about many times (as here in the mainstream press). Institutions do not do enough.

An inclusive workplace is a worthy goal, but it isn’t just around the corner. Some organisations are probably rather closer than others. I think we can be sure our House of Commons, whether headed by Boris Johnson or not, is a long way away from reaching that happy plateau, but it would be an improvement if our press did not perpetuate outdated stereotypes and treat different members of the population in such unbalanced and uneven ways.

1 Response to Do You Know How Many Children Boris Has?