Leaning In or Leaning Out: Who does What (and Why)?

Girly swot Brenda Hale, otherwise known as the outgoing President of the Supreme Court with an impressive taste in brooches (see figure), 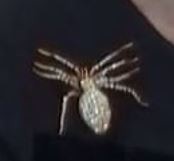 was quoted recently as saying:

“I encountered many young men from public school backgrounds who felt entitled to good jobs. And I realised that actually, quite a few of them were no better than me and, in some cases, not as good as me. And that made me feel: OK, I don’t feel entitled, but I’m going to try.”

Male or female, or anywhere in between, there will be many readers who recognize those dear folk around us who ooze entitlement. It might be due to their schooling, their upbringing or – conceivably – even something in their genes, but it does not lend itself to being good company. Perhaps Sheryl Sandberg would tell us poor unentitled characters to lean in, to try a bit harder in the face of others’ arrogance. And that same message of ‘lean in’ directed at women could also be taken away from a recent study of styles of paper-writing. Women’s papers fare less well on average, apparently, and this could be related to the fact that some women, unconfident feeble creatures that we may be, don’t use words like novel or unique, let alone refer to our work as exciting. So women, it’s time to lean in….or should that be, time for men to lean out? I think we should think a lot harder, culturally across society, about whether we should be expecting (some) men to step back and not work so hard to be explicitly the top dog leaning in.

If I were to be skeptical and nasty, I could describe a summary of this recent paper as

‘women just need to lean in more and boast‘,

Oh yes, did I say, a further result is that men (some, I’m not lambasting all of them! They probably know who they are, but they may well not read this blog) do better at getting their papers into high impact factor journals by virtue, so it would seem, of talking up their results? Because that appears to be the corollary of using lots of stand-out words in a manuscript, based on the evidence presented.

So, why does this sense of entitlement and this willingness to hype, really matter? It matters, as I wrote last summer with colleague Melinda Duer, because so much of our professional academic careers are determined by our publications’ record. If you don’t get the papers out, and as fast as possible without the multiple rewrites some women report being required, if you don’t get papers into high impact journals your progression may be stymied, unless, of course, your institution has signed up to DORA (and possibly even then, since there may be ignorant pockets of resistance).

What stops women praising themselves to the skies? Maybe another couple of recent papers give some clues into this. It could, according to one of these studies, be attributed either to confidence or to strategic incentives. However what Christine Exley and Judd Kessler found in the context of job applications, as described in a write-up of their paper in the Harvard Business Review, indicated neither of these were the root cause for holding back.

Women systematically provided less favorable assessments of their own past performance and potential future ability than equally performing men. And our various study versions revealed that this gender gap was not driven by confidence or by strategic incentives…

From this study, therefore, the jury is still out as to why women don’t talk themselves up to the same extent (on average). But another paper, specifically looking at the academic context of referees’ reports, shows just how much referees’ comments can impact on minorities, including women (and even more so for women of colour). This study illustrated their analysis with some truly appalling comments, including:

‘The first author is a woman; she should be in the kitchen, not writing papers.’

‘The author’s last name sounds Spanish. I didn’t read the paper because I’m sure it’s full of bad English.’

At this point I would like to ask what the editors thought they were doing by returning comments like these to the author. More to the point would have been for them to tear up the report and delete the referee from their database, making a point of telling them exactly why they were being blacklisted. Unprofessional – and plain nasty in some cases – refereeing should not be tolerated. However, the really sad thing was the authors’ finding as to the impact of such comments:

[where the number refers to the severity of the impact].

The consequence is that women and other minorities (such as that Spanish-sounding author) are more heavily penalized by the unprofessional behaviour of referees. Next time they submit a paper they are hardly likely to be peppering the abstract with words like novel and unique. A vicious circle ensues. They might even quit the field completely.

We all have a part to play in trying to level this particular part of the academic playing field. This last study I cite highlights the need for editors to check referees’ comments for appropriateness and act accordingly. (I may say, during the time I was editor for EPJE twenty years ago, I never remember seeing any comments that I thought were beyond the pale on any front. Are things getting worse, I wonder?) As referees we all need to think carefully if we are offering constructive criticism or merely being offensive. That is something each of us should take responsibility for.

The recent Royal Society of Chemistry report has plenty of statistical evidence backing up the gender gap in publication outcomes. I summarized some of their findings last month, but to reiterate a few of the key ones:

As Brenda Hale spells out, some people presume they are entitled, others find out all too often that entitlement does not apply to them, indeed that the system is set up actively to knock them back. In academia, as the evidence mounts regarding systemic bias, the whole community in their roles as, editors, referees, and members of appointment, funding or promotion panels, need actively to work to counter this. Otherwise, a generation on, we will still be wringing our hands about the lack of women at the top, the leaky pipeline and the gender pay gap.

This entry was posted in Equality, Women in Science and tagged Baroness Brenda Hale, bias, publication. Bookmark the permalink.

One Response to Leaning In or Leaning Out: Who does What (and Why)?