When Rita Colwell was born in 1934, neither Oxford nor Cambridge Universities had yet appointed a female professor in any discipline; Dorothy Garrod, the first woman to hold such a chair (the Disney Chair of Archaeology at Cambridge), was not appointed until 1939. Colwell herself went on to a distinguished career in environmental microbiology – she was particularly important in unravelling part of the life cycle of cholera, especially the nature of its dormancy – which contained many ‘firsts’ of her own. Notably, she was the first woman to be Director of the National Science Foundation (from 1998-2004). In her recent book A Lab of One’s Own: One Woman’s Personal Journey through Sexism in Science  she details her career and all the hurdles she had to face before reaching such a position of eminence.

It made for sobering reading. It is good to be reminded of just how far we, collectively, have come, even if the playing field remains less than even on multiple fronts. The book reflects the author’s nationality (American) and discipline, so that in some ways it did not totally resonate with my own experience of the world, starting out 20 years later. It nevertheless included numerous fairly horrendous episodes, some of which I could certainly relate to. For instance, Colwell reports another woman remarking

“If two women stood at an elevator, a man would come by and say ‘What are you two ladies plotting?’”

That took me back to 1992 when we had the ‘grand opening’ of the new Tabor Laboratory, our new lab for colloid research at the Cavendish, which was officially opened by Edward Leigh. He was then a junior minister whose ability to do a competent job of unveiling a plaque was thrown into question, as the photograph shows. 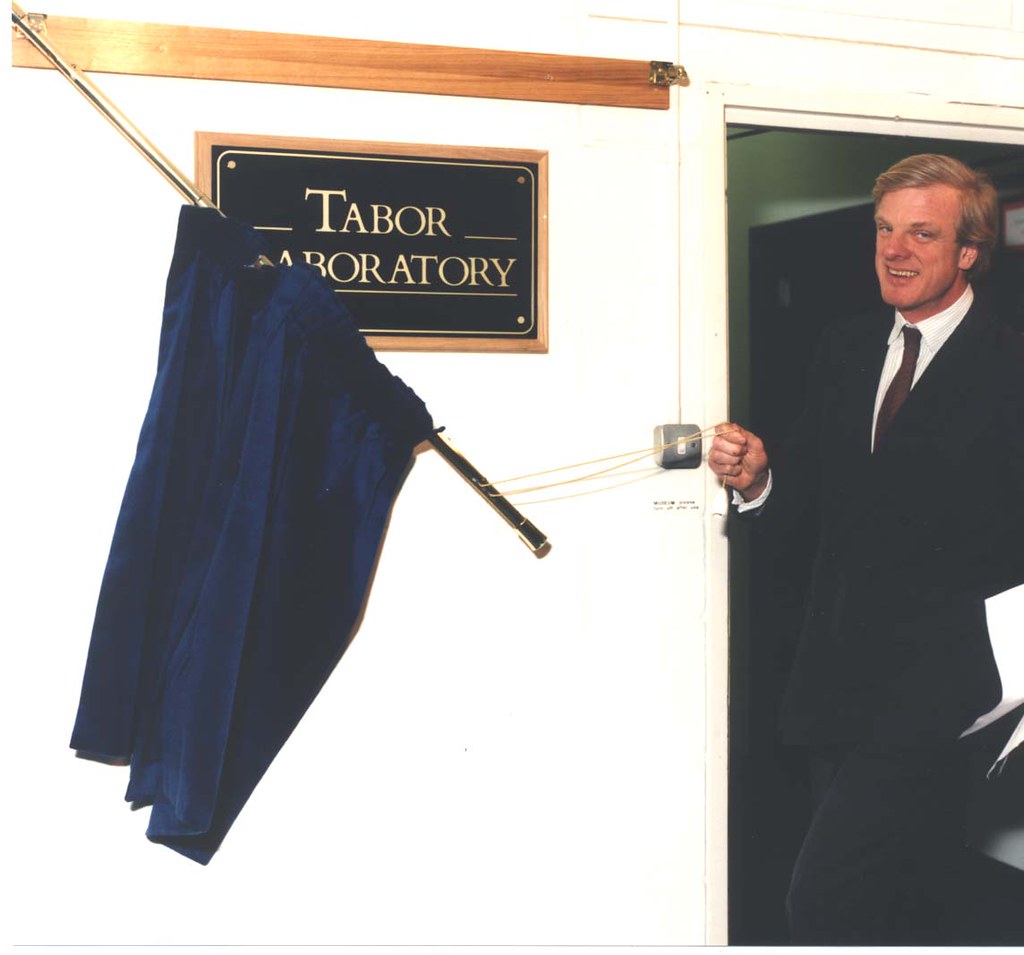 However, that laugh aside, the relevant comment I remember being made by a male colleague catching myself talking to Anne Campbell, then our local MP, and the female editor (whose name I can’t recall) of the local newspaper  was

“Having a hen party then?”

It struck me then, as it strikes me now when the Colwell anecdote brought it back to mind, just how inappropriate such a remark was. Clearly the man – who I got on with perfectly well in general – just couldn’t abide three senior women chatting over a sandwich. Did he feel threatened?

Some anecdotes, mercifully, are beyond my personal knowledge. Such as the one in the book told by Nancy Hopkins

“Before I could rise and shake hands, he had zoomed across the room, stood behind me, put his hands on my breasts, and said ‘What are you working on?”

The man was Francis Crick. The year was 1964. Perhaps the indignity closest to this that I’ve suffered was at a reception for the University at St James’ Palace, when a senior professor marched up to me, said

and proceeded to act that out. Why didn’t I slap him? I guess because I was too surprised and it hardly seemed appropriate to make a fuss in such august surroundings. After all, nice girls don’t make a fuss. That would have been in 2009, when the University was celebrating its 800th anniversary – 800 years during which women had, of course, only been allowed to be full members for around 60 years (Garrod would not have been allowed to call herself formally a BA, even though a professor, as women could only gain ‘titular’ BAs before 1948).

There are still many men out there who assault women to greater or lesser degrees, and many of them will never be called out. Many women will be deterred from pursuing their dreams because men – not all men of course, but some – will harass and ridicule women and overlook them when it comes to career opportunities. My experience tells me you don’t have to be junior to be harassed; you can work out how old I was in 2009. We continue to need firm action to ensure the talented women are just as likely to progress as the talented men. Because of this I am worried by the announcement last week by the Science and University Ministers, Amanda Solloway and Michelle Donelan respectively, that – as part of the ‘bonfire of bureaucracy’ – Athena Swan awards (and other similar accreditation kitemarks) will no longer be valued by UKRI in forming judgements about departments, nor a requirement for those institutions seeking NIHR funding.  As they say

“We have therefore asked the OfS, UKRI and NIHR to ensure that they place no weight upon the presence or absence of such markers or scheme memberships in any of their regulatory or funding activities.”

As a member of the Athena Swan Review Group I am deeply disappointed that our work over the past 18 months looks like it may be wasted. As the Review Group said right at the outset of our Report

“… it is clear that the Charter process has become increasingly burdensome in terms of the amount of time and internal capacity required to comply with the needs of the application process. Given the multiple pressures on staff time, the Athena SWAN Charter must reflect a more proportionate use of time and resources so that universities and research institutes are able to make the commitments needed to improve outcomes around gender inequality for staff and students and meet wider inclusivity aims.”

Our recommendations, not immediately wholly accepted by Advance HE, to our regret, were very much designed with lightening the load in mind. There is no doubt that the sector has struggled with the burden, and many resented the time required to obtain all the data, taking time away from actually making the changes needed. The trouble is, without the carrot (or was it a stick?) of getting such an award, I fear many institutions will simply decide equality issues can be permitted to slide down the agenda. In this pandemic age, that was always going to be a danger. Without such external pressures, however, too many departments and organisations may just feel it is a ‘luxury’ they can do without, even though equality is indubitably not a luxury for those who are at the sharp end of disadvantage, bias and outright harassment.

With Ottoline Leyser at the head of UKRI, at least one can be confident that there is someone at the helm who cares passionately about ensuring the individual survives and thrives and that equality does not get neglected. I will look forward to seeing what alternatives to the formal Athena Swan award she may wish to introduce. I still believe the Review Group’s recommendations – and you can see them in full on page 10 onwards of our Report ­– would have made a huge difference, without necessitating downgrading the value attached to the whole process. In the meantime, all those people, predominantly women, who have battled so resolutely to get Athena Swan applications ready may be feeling both relieved and angry. I hope that in the bonfire we don’t lose the progress we have made so far, when there is still so much to do.