The Politics of White Lab Coats

Everyone knows what a scientist looks like. The species is easily identifiable because they wear a white lab coat wherever they go. It is almost as if, if you don’t wear a white coat you can’t be a serious scientist, in the eyes of the media. It was noticeable, on this week’s International Day for Girls and Women in Science, how few women (and girls) posted selfies of themselves so attired to prove their credentials as the bonafide scientists they were. Bobble hats a-plenty, but most eschewed the purported ‘uniform’. I don’t blame them.

Google ‘scientist image’ and you have to go through 19 images before you come to one that doesn’t involve a lab coat. And that is of an elderly Einstein, who probably (as a theorist) never in his life went near such an item of clothing – but of course the other frequently cited attribute of a scientist, that of sticking-up hair, is naturally present. That image is then followed by several more tens of images involving lab coats, plus a couple of historical images. It is true that there are far more women to be spotted in these images than a web search of a few years ago would have thrown up, but it is depressing that this is what is meant to convey ‘scientist’. 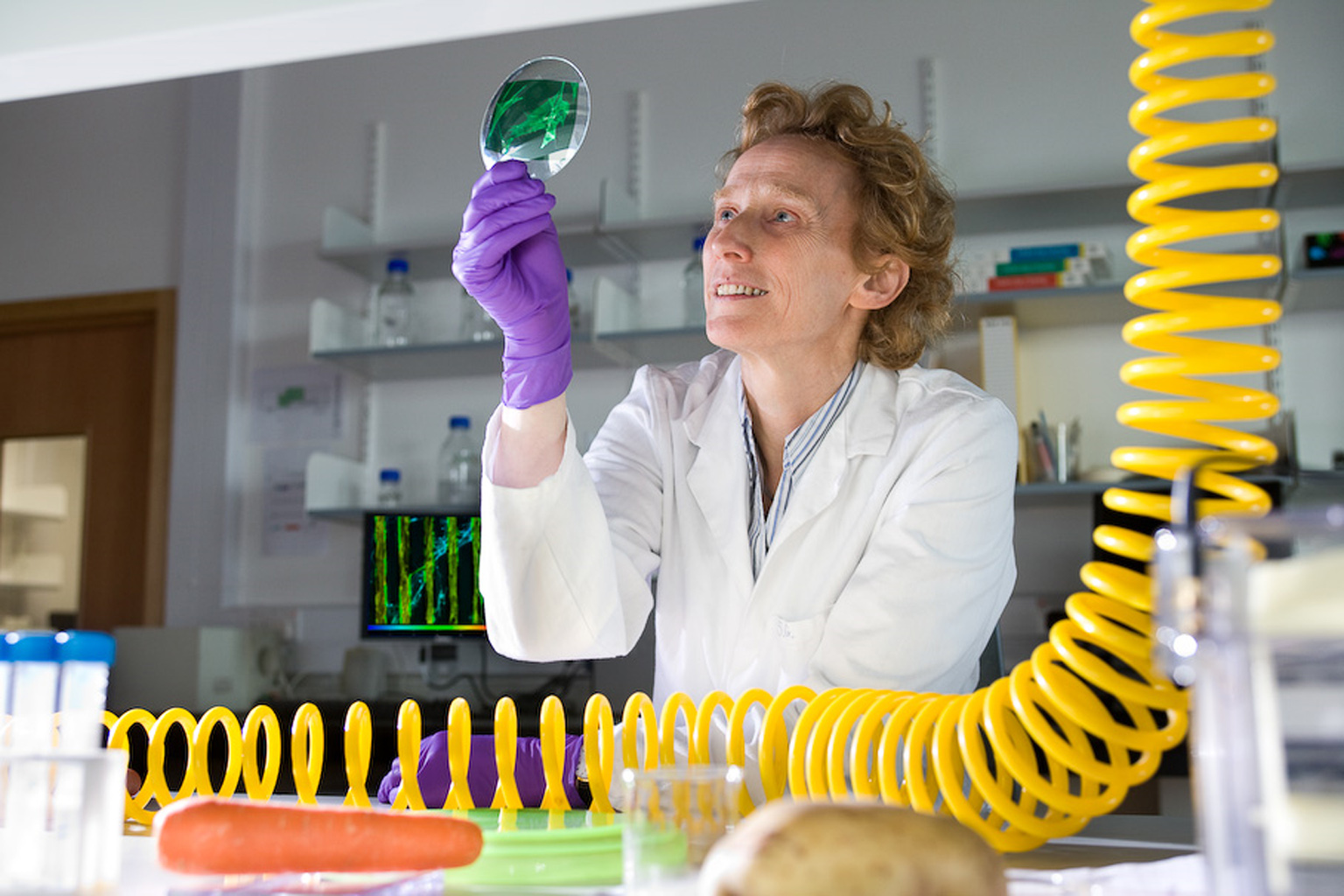 When, more than ten years ago now, I won the 2009 L’Oreal/UNESCO Laureate for Europe award and publicity required a series of photographs to be taken by an eminent French photographer (Micheline Pelletier), it was a lab coat that was required (and purple disposable gloves too, another common part of the scientist’s uniform), as you can see. This was the photo that adorned the back page of Le Monde and the L’Oréal building in Hammersmith. Or rather, a suitably cropped version of it. Interestingly, the foreground containing the carrot and the potato were cut out. As a side issue you might wonder why they were ever introduced. The answer is simple: I have indeed carried out research on both. As the lay citation said, I was awarded the prize “For her work in unraveling the mysteries of the physics of messy materials ranging from cement to ice cream.”  – but it might as well have said from potatoes to carrots.

The reality is, of course, I hadn’t worn a lab coat for years. At the start of my career, yes I did wear one, and it was just as well I did. In those days, when I worked on metals not polymers, I had occasion to use a lot of orthophosphoric acid. This, it turned out, is very efficient at making holes in textiles (as I said in a recent post, I was a ham-fisted researcher, and too much acid fell on my person rather than doing the job it was meant to be doing of etching small copper discs). My lab coat ended up quite perforated. I was just glad it was that – supplied by the department – and not my own clothes, given the tight budget I was living on.

Why do I raise any of this now? It is noticeable that in recent days, our very own Prime Minister has adopted this uniform (e.g. here) to prove just how close he is to science and the scientists – almost one of them, you might say – and to prove his association with the production of vaccination. The PM carrying crates of vaccine, watching a vaccination or walking around a hospital – always wearing a white lab coat. In the early days of the pandemic we heard a lot from him and his ministers about being “guided by the science”, sometimes even “led by the science” or “following the science”, but he wanted the voters to believe science and scientific advice sat at the heart of his actions, whether or not that was actually the case. Increasingly it became clear that it often was not, with politics and/or the economy being even closer to his heart.

Having discovered last summer that those were phrases that were getting just too indigestible and so backing away from anything about science, the success of the vaccination roll-out seems to mean he feels it’s safe to get close to science again. And hence, provoking a plethora of photo opportunities for him dressed up to resemble a ‘scientist’, whether or not it’s an accurate portrayal. After all, he has pledged – on various occasions – to make the UK a ‘scientific superpower’ now that we have left the EU. To that extent we, the scientific (in the widest sense) community, should be grateful that he has agreed that the UK can sign up to Association with the EU for Horizon Europe.  This has the potential to make a big difference to the community, or at least not remove something that we have enjoyed, in all senses of the word, for many years.

We, the community, need to make sure this wished-for association status does not come at the expense of the previously promised uplift in spending on science; that when the Treasury finally produces its five year Comprehensive Spending Review, the money attributed to Horizon Europe (which, in previous Framework Programmes would have been simply absorbed in the overall contribution to the EU Budget) does not suddenly appear in the science budget, removing at least some of the ‘new’ money which all the headlines have implied will be forthcoming. That money needs to be additional not substitutional.

I am very glad the Prime Minister does recognize the importance of science. Daily, the whole country has reason to be grateful to scientists and clinicians in all kinds of ways. However, how many of our politicians really understand words like evidence, hypothesis-testing or modelling? I fear not as many as we need, whether or not they are dressed up in white lab coats.