Upon first glance, which of the below diagrams1 makes the most sense to you? 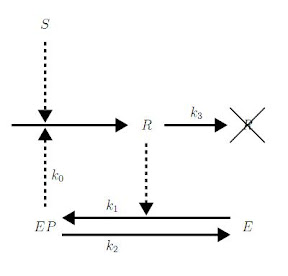 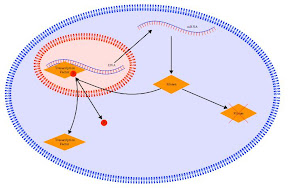 As it happens, both diagrams describe the same generic biological process. They are drawn from a report concerning the study of the changing levels of the kinase, R, over time.

S, the “signal”, is the level of mRNA from which R is transcribed. As well as being the response, R is involved in a positive feedback loop. R activates the protein E by phosphorylation and EP in turn enhances the rate of synthesis of R.

When this report including these two figures was shown to (a small sample of) biologists and to (an equally small sample of) mathematicians, mathematicians gravitated towards the first picture and were able to quickly and easily understand how the time evolution of R could be described using the accompanying equations. They baulked at the second diagram, describing it as “confusing” – to the bemusement of biologists who are familiar with diagrams involving many more interacting molecules.

Those with a background in biology, on the other hand, seemed more comfortable with the second picture. Whilst some of them shied away from the equations, a verbal description of the behaviour of the system (“changing the level of S affects the steady-state level of R”) was intuitive and the visual representation in Figure 2 was a means of leading them into the discussion which followed.

What can we learn from this anecdotal observation of colleagues proof-reading my undergraduate dissertation? As I plunge headlong into multidisciplinary postgraduate study, my peers and I are becoming acutely aware of the knowledge each of us brings – and the understanding that each of us lack. But the difference between students with contrasting backgrounds is not just in the facts and methods each can remember. How we represent the world to ourselves seems different too. Learning to bridge the gap in perception – to see what we are understanding through the eyes of someone from a different discipline, as opposed to complaining to the mathematicians “…but biology is just not like that…” will be significant in our future success. Hopefully, as biologists, we will learn how to usefully use mathematics to describe and investigate biological processes. Perhaps I can convert a few people without training into biology to drawing colourful diagrams alongside their equations too – they might find a way to open biologists’ eyes.