In which the old girl rides again 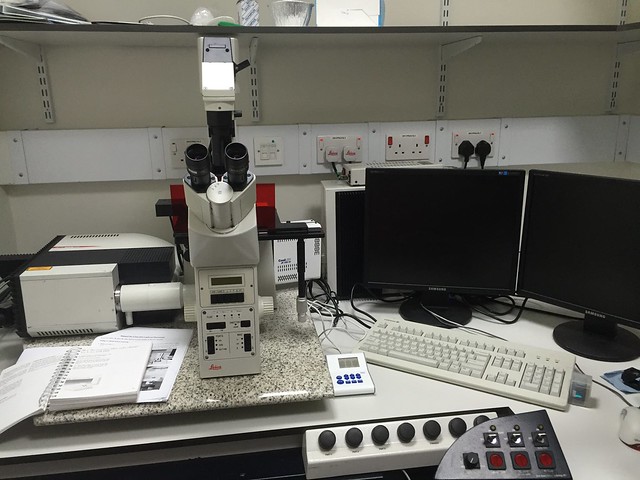 As you can see, my young apprentice, your experiments have failed. Now witness the firepower of this fully armed and operational second-hand confocal microscope!

Some time ago, our department scored a good deal on an old Leica SP2 microscope that another department was getting rid of. Mothballed it remained until my lab moved in with its heavy imaging modus operandi, and we were asked to get it up and running as a communal asset. One of my PhD students, Harry, rather likes messing around with equipment or anything technical, and seeing as how he was having to commute to another institute to do the microscopy on which his work is heavily reliant, it seemed like a good idea to rise to the challenge.

Harry is also the sort of person who has a natural way with engineers and tradesmen, and over the years has developed a great relationship with the various people who would be crucial for getting the machine up and running.

It turned out not to be as straightforward as we might have hoped. This machine is, in modern lab terms, ancient. On unpacking, the scope guys discovered that some of the pieces were missing – pieces that Leica no longer manufacture. To compress the months-long saga into one sentence, after scrounging old parts and fabricating one new one, and even calling a Leica engineer out of retirement to cobble together a new service dongle, we had gone as far as we could go. This required financial investment – and all without knowing whether it would actually function, as some parts couldn’t be tested until the thing was properly switched on.

Dear Reader, there was a happy ending: it works. For how long, we don’t know – but we’re just going to ride that wave ’til it crashes.

In the meantime, she needs a name. And no, we’re not going to call her Scopie McScopeface.

Scientist, novelist, rock chick
View all posts by Jennifer Rohn →
This entry was posted in Kit, Research, The profession of science. Bookmark the permalink.

7 Responses to In which the old girl rides again