In which we sort ourselves out When you move into a new house, you unpack about 90% of your belongings in the first months. And then, of course, there’s that lingering tail that seems to get put off indefinitely.

This asymptote of neglect can be indicative: if you haven’t opened a box for a few years, it’s likely you never will. I’ve shed a lot of junk along my life’s journey from one country to the next, over many dozens of temporary dwellings, but I still carry along with me a few dusty, taped up boxes containing goodness-knows-what: old photos, letters, memorabilia, experimental data. One day I might be tempted to break the seal. For now, they’re stashed in the loft, their contents wrapped in yellowing newspaper, each wad of it a time capsule in itself.

We moved into our current house a bit more than two years ago and, as per the formula, most of the rooms were sorted out in short order. The spare room and the study, however, become dumping grounds for things we thought we could organize later, bookshelves crammed willy-nilly, literature mingling sadly with storage containers and extinct media formats like VCR tapes and CDs.

Over the Christmas break, we’d had enough. Both Richard and I can’t write well if our designated spaces aren’t tidy, and something needed to be done. Ruthlessness was required. Many things were “lofted”: sealed boxes, seldom-used things, and a heartbreaking series of baby items that are no longer required but might one day be useful for grand-children. Best of all, we finally sorted out our respective desks, and the many bookshelves. We drew the line at any sort of organization aside from spine height – except for my long-anticipated “Wall of Lab Lit“.

In short, there’s no excuse now not to get writing seriously again! 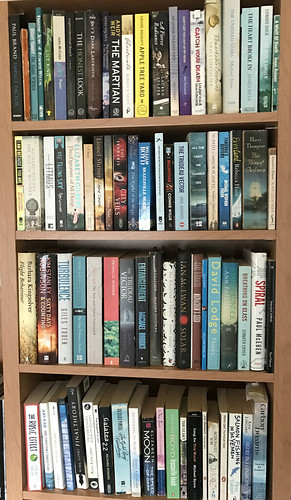 8 Responses to In which we sort ourselves out