The latest in a long line of R&D strategy documents from the UK government reveals some promising evolution in its strategic thinking. But while it touches on a wide range of complex and interacting challenges, the precise direction of travel is still unclear

It’s easy to be cynical – and hard to see past the immediate threats posed by the government’s mishandling of the Covid-19 pandemic – but anyone interested in the UK research base and how it might be made to work better should have a look at the new UK R&D Roadmap, which was published on 1st July. You can get a quick overview from the three-page executive summary (p5-7 in the PDF version), but it is worth delving deeper. For those without a couple of hours to read the whole thing, let me try to pull out a few key points. I will leave discussion of the plans for the commercial innovation ecosystem to wiser heads and focus on those aspects that struck me, a university-based academic.

First off, there is much that is good in the roadmap. Right up top (p5, p11) there is a clear recognition that the UK research needs to be a “mix of curiosity and application” and that this will resonate with the deepest motivations of most researchers both to explore the world around them and to solve its most pressing problems. It’s less clear exactly how that mix will be sustained, particularly since much of the Roadmap is devoted to describing how UK research will be harnessed to economic and strategic priorities. However, the prominence given to the idea of balancing discovery and exploitation is grounds for some optimism.

Second, to commitment to researcher mobility is loud and clear (p22). A new Office for Talent will facilitate international mobility. And the recently announced Global Talent visa is already buttressed by the restoration and enhancement of rights to work in the UK for overseas graduates and postgraduates. Further reform of talent visas are promised, though the details remain vague. Of course to a large degree these measures merely counteract the loss of freedom of movement within the EU triggered by the government’s Brexit policy and reverse decisions made by previous Conservative governments, but it is at least heartening that the dead hand of Theresa May has finally been lifted from UK research policy.

Third, the roadmap discusses the creation of a new R&D People and Culture strategy (p19) which will foreground better support for early career researchers and technicians, and address long-term structural inequalities by aiming to attract more diverse pools of talent – in part by ensuring that research leaders are equipped with the skills to manage people properly. These are aspirations that have been floated in earlier documents (such as the UKRI’s 2018 Strategic Prospectus) and many questions remain as to the extent of commitment and the plan for implementation, but it is nevertheless encouraging to see people-focused concerns becoming embedded in discussions about research policy. In this latest roadmap there is acknowledgement that some of the positive researcher behaviours observed in response to the Covid-19 crisis, such as “collaboration, knowledge-sharing and support for colleagues feeling the impact” now need to be properly recognised and rewarded if they are to become systemic. 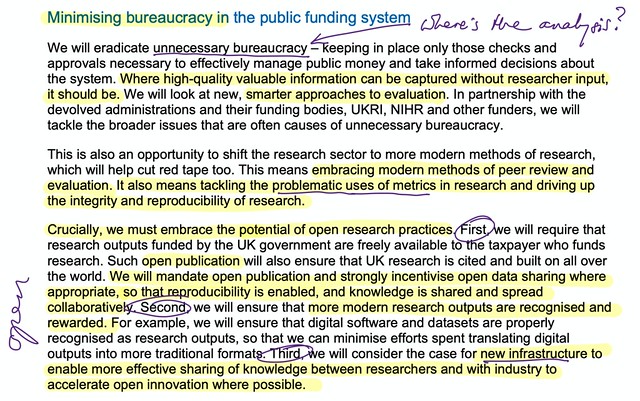 Fourth and finally, following an impulse that has perhaps also been reinforced by Covid-19, the Roadmap espouses a national commitment to open scholarship (p51). This includes mandated open publication, strong incentives for data and code sharing, and – though the language here is vaguer – support for new infrastructure to help make this happen. The devil will certainly be in the detail, but as a public statement this is already some distance from the equivocations of the Finch report and its aftermath.

So far so good. And yet many questions remain. Part of the purpose of documents of this sort is to be aspirational, but sooner or later reality must be faced. In places the roadmap is surprisingly honest in its appraisal of the UK’s problems and challenges, but as I read through the questions just kept piling up. 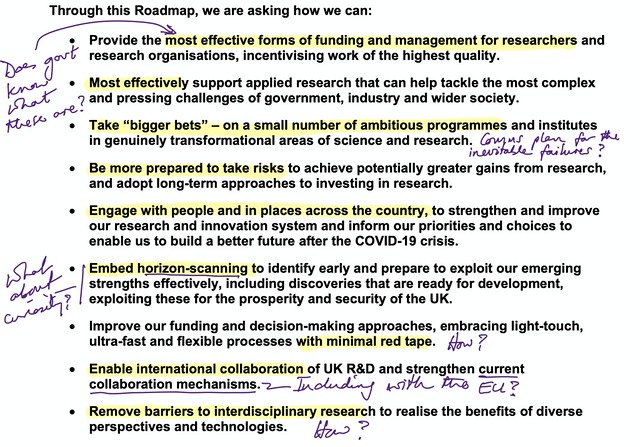 Some of them are posed by the Roadmap itself – this is a discursive document that aims to start a conversation. But coming from a party that has been in power for a decade during which the R&D agenda has only gained in importance, we might have hoped the government could have dug a little deeper prior to publication. Perhaps that reflects inexperience within the current administration?

Thus on page 12 the Roadmap asks us to consider “how we can provide the most effective forms of funding and management for researchers and research organisations, incentivising work of the highest quality”; how we can “take bigger bets […] in genuinely transformational areas of science and research”; how to do “horizon scanning”; how to “remove barriers to interdisciplinary research”. None of these questions is new and all of them have complex and context-dependent answers.

Elsewhere, the sense of a government determined to put in place a viable career structure for early career researchers ebbs away. On page 20, after reassuring the reader that the government should not wait for perfect data before taking action, the roadmap states rather blandly that “we will […] identify action we can take to increase support for early career researchers…”. Fresh thinking on an old problem is promised, but you have to ask why it wasn’t brought to bear while the roadmap was being written.

The importance of place is mentioned frequently and rightly so. One of the most pertinent questions raised but not solved by Brexit is (p59) “How should we ensure that R&D plays its fullest role in levelling up all over the UK?” Here again, plans are unclear. The specific question on p35, “whether our existing, core funding schemes deliver sufficient economic benefit to places across the UK” has a ready but unuttered answer: no, they don’t. There follows some nebulous discussion about collaboration between stakeholders (the devolved administrations, business, academics, universities, charities and local leaders), but where are the plans to create new institutions, or to leverage the strengths of the existing asymmetrically distributed research base to foster growth in regions where it is most needed? Given the repeated assertions in the document about the need to work with the devolved administrations, one has to hope that the Johnson government’s interactions with them on R&D policy will be smoother than has been the case during the Covid-19 pandemic; there is a further and urgent question here of how the English regions will be given a voice in shaping the research base to their needs.

The other place mentioned, though somewhat less often, is Europe. While many warm words are expended on Britain’s international research vision and the desire to remain a close and friendly partner in EU R&D schemes, the plan in the event of a no-deal Brexit – a dangerous prospect that Prime Minister Johnson regards insouciantly – amounts only to meeting funding shortfall and putting in place “alternative schemes” (p7). The Roadmap might recognise the important role of international organisations in supporting multilateral research projects, but no mention is made of the loss of this vital facility as a result of the government’s enthusiasm for divorcing our European partners.

Universities, which in are more important parts of the UK R&D ecosystem than in many other European countries, get short shrift in the Roadmap. Reassurances about the value of discovery research notwithstanding, the renewed focus on strategic research raises questions about institutional autonomy. There is a nod to the problem caused by the fact that UKRI research grants do not pay the full cost of research, obliging many universities to subsidise research from overseas student tuition fees – a source of income that is now under severe threat. The Roadmap provides lukewarm reassurance (p57): “We will work with other funder to consider opportunities to fund a greater proportion of the full economic cost of research projects in universities.”

A line that might cheer up the universities, if they can bring themselves to believe it, appears further down on page 57: “we should aspire to run a [Research Excellence Framework] that is fair, unbureaucratic and rewards improvement.” That aspiration to reduce bureaucracy is a recurring theme of the Roadmap. But the problem is not defined in any detail; and nor are solutions laid out. Instead we are told (p36), “we will find new ways to track the development of R&D capacity across the UK […] but without adding to unnecessary bureaucracy; or elsewhere (p51) that “we will eradicate unnecessary bureaucracy – keeping in place only those check and approvals necessary to manage public money […] and take informed decisions”; or (also on p51) that “UKRI will reinvigorate participation in the peer review system through ensuring the system is easy to work with.” This is all very laudable, particularly when coupled with the Roadmap’s determination to embrace risk and to swallow the failures that will inevitably ensue, but is it not also horribly naïve? It smacks of the romantic notions of unleashing disruptive innovators and agile scientific geniuses that are to be found in Dominic Cummings’ musings on science and government. They would be a lot more persuasive if they had a some substance.

Which begs a final question: who wrote the Roadmap? It was not launched with a speech by Alok Sharma, the Secretary of State, or by Amanda Solloway, the Minister for Science, Research and Innovation, leaving questions as to their personal engagement. It’s hard to think of any of the recent science ministers – David Willets, Greg Clark, Jo Johnson, Sam Gyimah or Chris Skidmore – passing up an opportunity to sell their vision. For all its lack of detail, the Roadmap exhibits seriousness of intent; in many places it articulates a positive and outward-looking vision of the future of UK R&D that should be welcomed and engaged with. But if it doesn’t have a loud and visible champion in government, where is it headed?