Ring the bell for tea, Kitty!

My family and I are big fans of Jane Austen. We particularly like the mid-1990s BBC version of Pride and Prejudice featuring Jennifer Ehle and a rather youthful-looking Colin Firth. Having seen the series a gazillion times, the hysterical voice of Mrs. Bennett (Alison Steadman) shrieking at her daughter “Ring the bell for tea, Kitty!” has become somewhat of a family joke. Every doorbell, church bell or chime elicits the phrase like a Pavlovian reflex.

So it was not unexpected that “Ring the bell for tea, Kitty!” left my lips as I entered Omaha’s Lauritzen Botanical Gardens a few weeks ago and encountered a rather unusual looking assembly of all sizes of bells in a contraption that I learned was known as a Carillon.

Little did I know that I was in for such a musical treat, as the carillon was played beautifully by a local musician who trained playing the chimes at one of Omaha’s local churches. The owner of the carillon explained that the bells were made by the Royal Eijsbouts Bell Foundry in the Netherlands back in the early 1990s. Apparently, huge numbers of bronze church bells were destroyed by the Nazis in World War II, as they systematically moved through occupied Europe and melted down bell after bell for their munitions factories. This in turn generated a market for bell factories post WWII.

I include here only a sampling of the beautiful chimes that we heard, but for those interested, there are many videos available online. 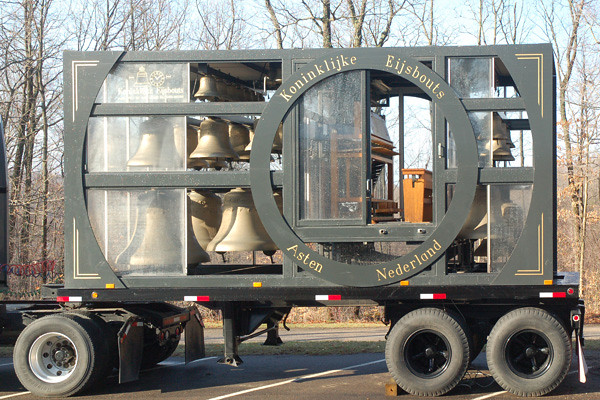 One of only 2 carillon in the US.

I am a Professor of Biochemistry and Molecular Biology at the University of Nebraska Medical Center in Omaha, Nebraska where I mentor a group of about 10 students, postdoctoral fellows and researchers working on endocytic protein trafficking. My first lablit novel, "Matter Over Mind," is about a biomedical researcher seeking tenure and struggling to overcome the consequences of growing up with a parent suffering from bipolar disorder. Lablit novel #2, "Welcome Home, Sir," published by Anaphora Literary Press, deals with a hypochondriac principal investigator whose service in the army and post-traumatic stress disorder actually prepare him well for academic, but not personal success. Novel #3, "A Degree of Betrayal," is an academic murder mystery that is now in press! All views expressed are my own, of course--after all, I hate advertising. http://www.stevecaplan.net
View all posts by Steve Caplan →
This entry was posted in Uncategorized and tagged bell, bells, botanical gardens, carillon, chimes, Eijbouts, Jane Austen, Lauritzen, music, omaha, Pride and Prejudice. Bookmark the permalink.

4 Responses to Ring the bell for tea, Kitty!