Right on: the only museum dedicated entirely to human rights 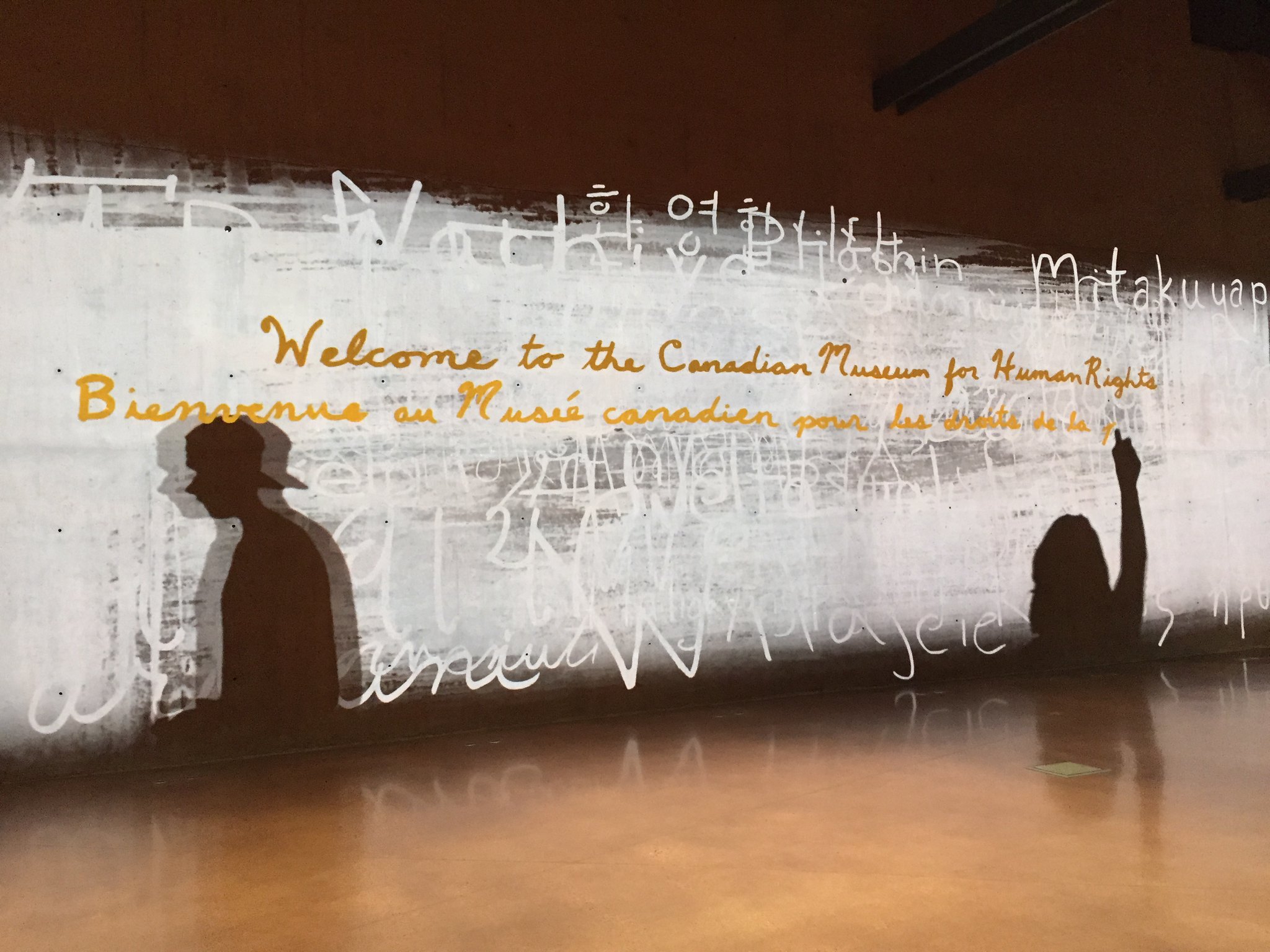 When I last visited family in the city of Winnipeg, Canada, I had the opportunity to do a tour of the outside of the Canadian Museum for Human Rights (CMHR), as it was not yet opened for the public. On this visit, 2 years later, this one-of-a-kind museum located at the Forks — the meeting place of the Assiniboine (east-west) and Red (north-south) Rivers is now hosting over 800 paid visitors per day. 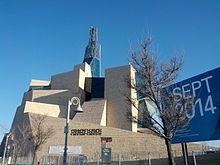 The CMHR — not my photo

I found the idea to be unique — important and intriguing, although I was very skeptical before seeing the exhibits. My childhood in Canada had caused me to anticipate a very back-slapping and self-righteous museum, in which Canadians would denounce others and proudly announce their own commitments to human rights, without mentioning the many failures. I was wrong. 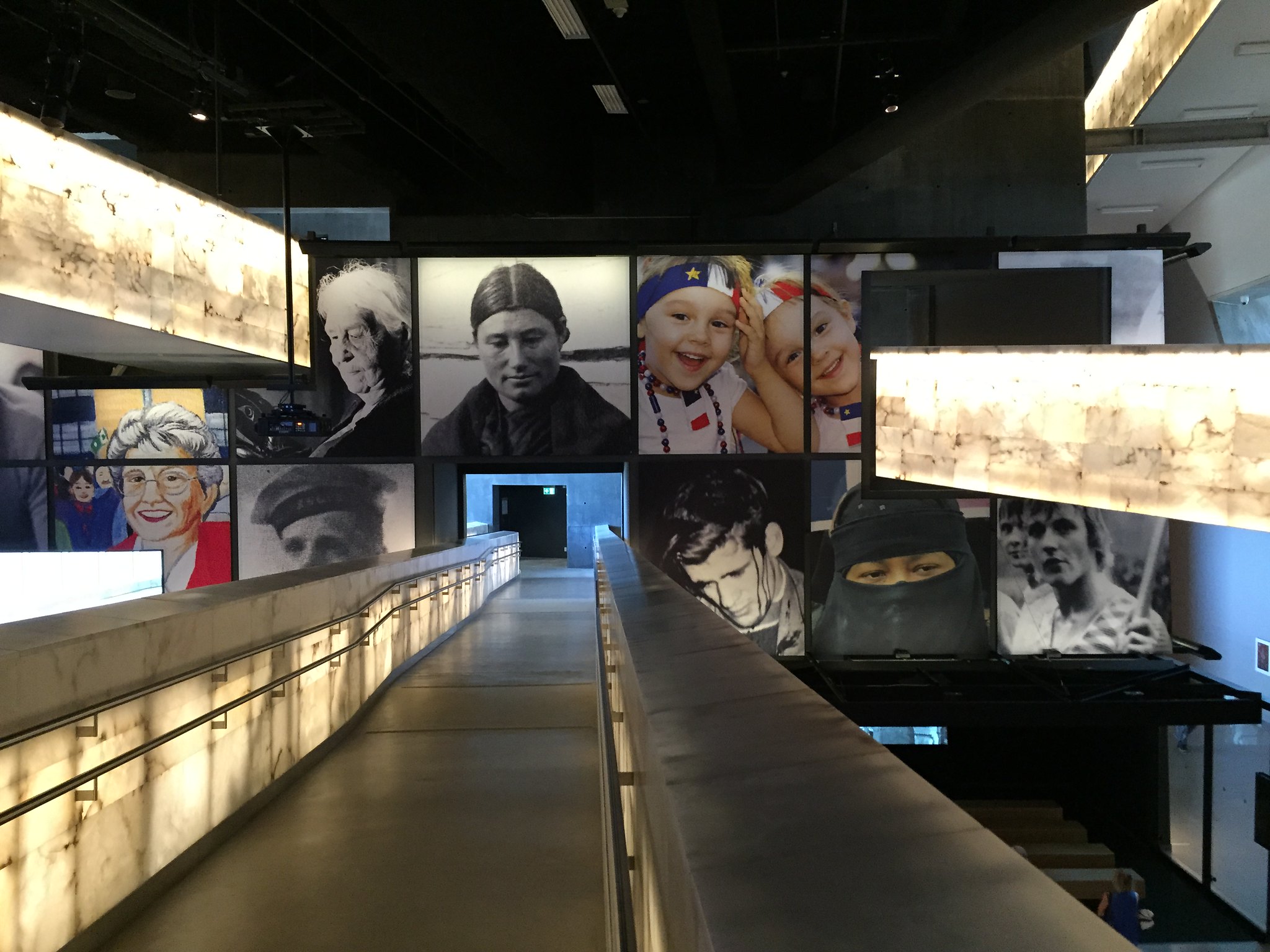 A display seen from one of the many alabaster bridges that work their way up the building.

The CMHR is not perfect — but no museum is. However, it makes a sincere attempt to reconcile Canada’s past with its many errors. These include, but are not limited to the assignment of First Nations’ children to Christian religious boarding schools over the past 100 years (indeed, until the 1990s) — what was conceived as an attempt to remove any traces of native Canadian First Nation culture. Also included was a serious discussion of Canada’s abysmal record of turning away immigrants (mostly Jews) who had managed to escape from Nazi Germany during the 2nd World War. Many of these immigrants ended up returning to the shores of Europe only to die in Hitler’s gas chambers.

In the history book “None is Too Many: Canada and the Jews of Europe 1933-1948” the authors address Frederick Blair — the head of Canadian immigration — who reportedly was asked how many Jews would be allowed into Canada as refugees after the war — and his answer was “None is too many.”

The museum is unique in that it is focused mostly on personal stories — victims and heroes — and typically shies away from too much emphasis on blame. More important is the attempt to understand how the violation of human rights led to atrocities, and how this could have been stopped. 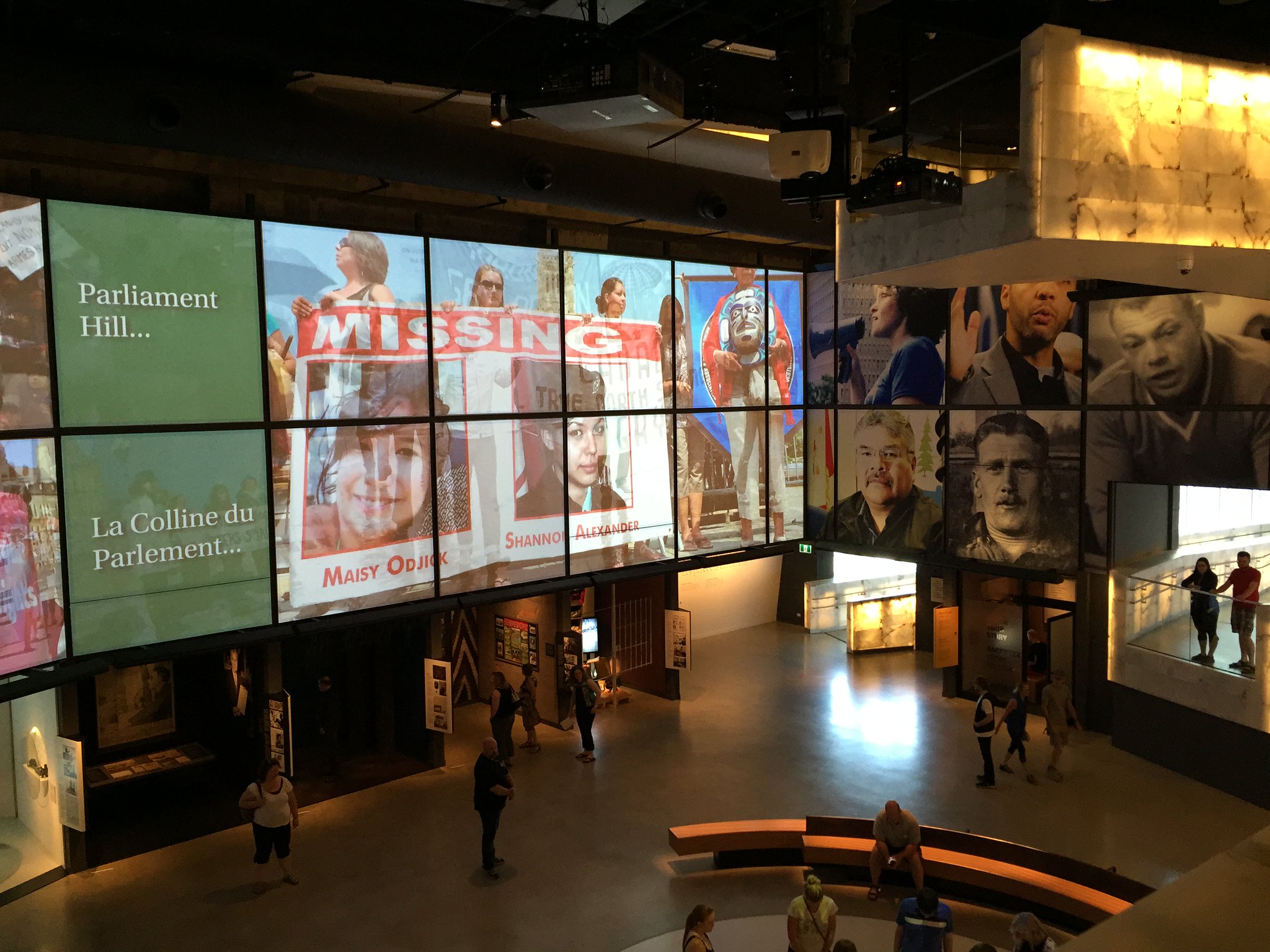 An exhibit hall on the 3rd floor 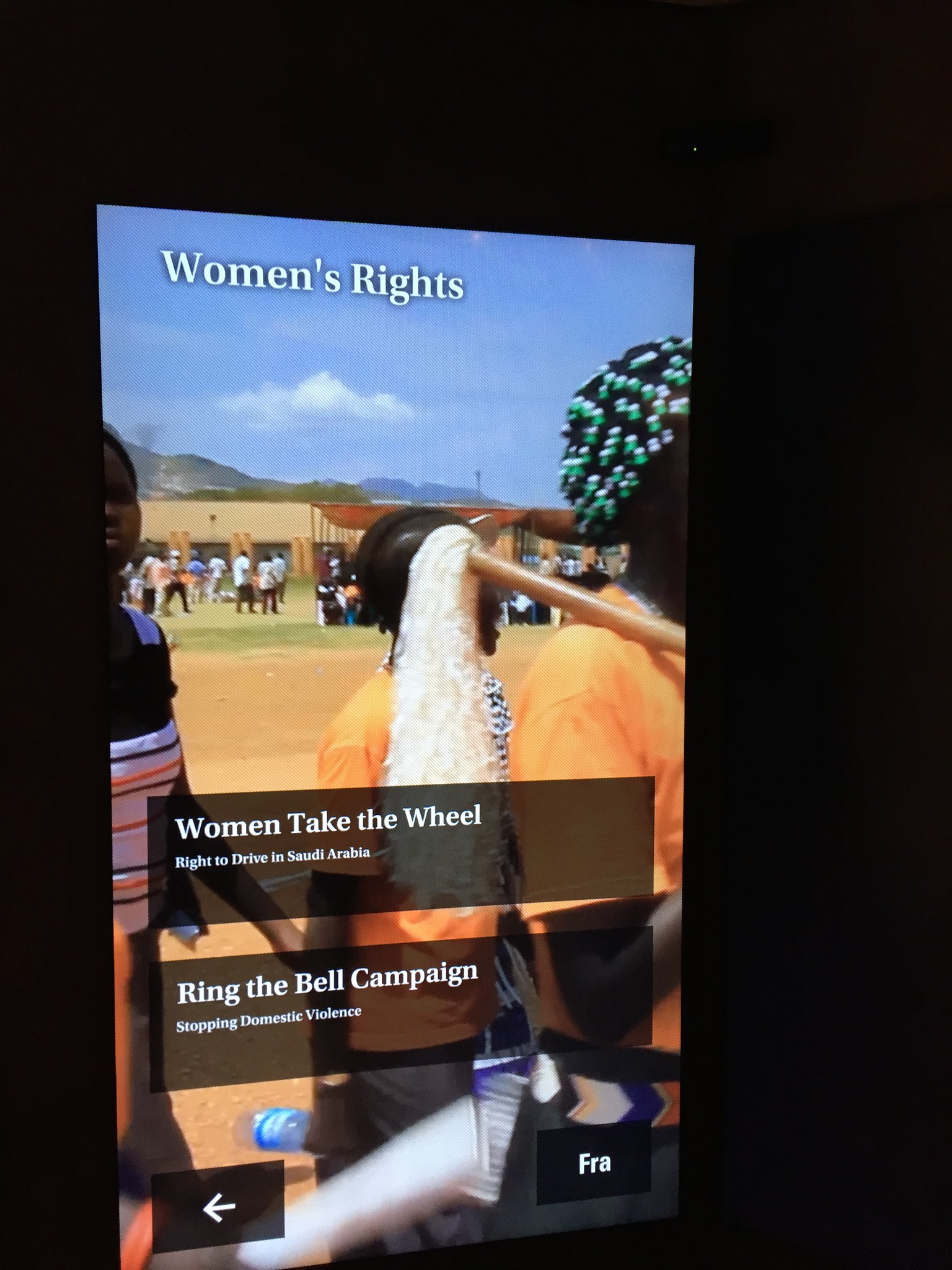 Women’s rights. 50% of the population, and many countries

Women’s rights are an incredibly important part of the exhibits — and the problems presented are not limited to third-world countries. The museum does not shy away from showing western commercials and advertisements that present women in a demeaning manor — ads for shoes and clothes and fashion models. Seen as part of a gradient of sexism, this is very compelling. 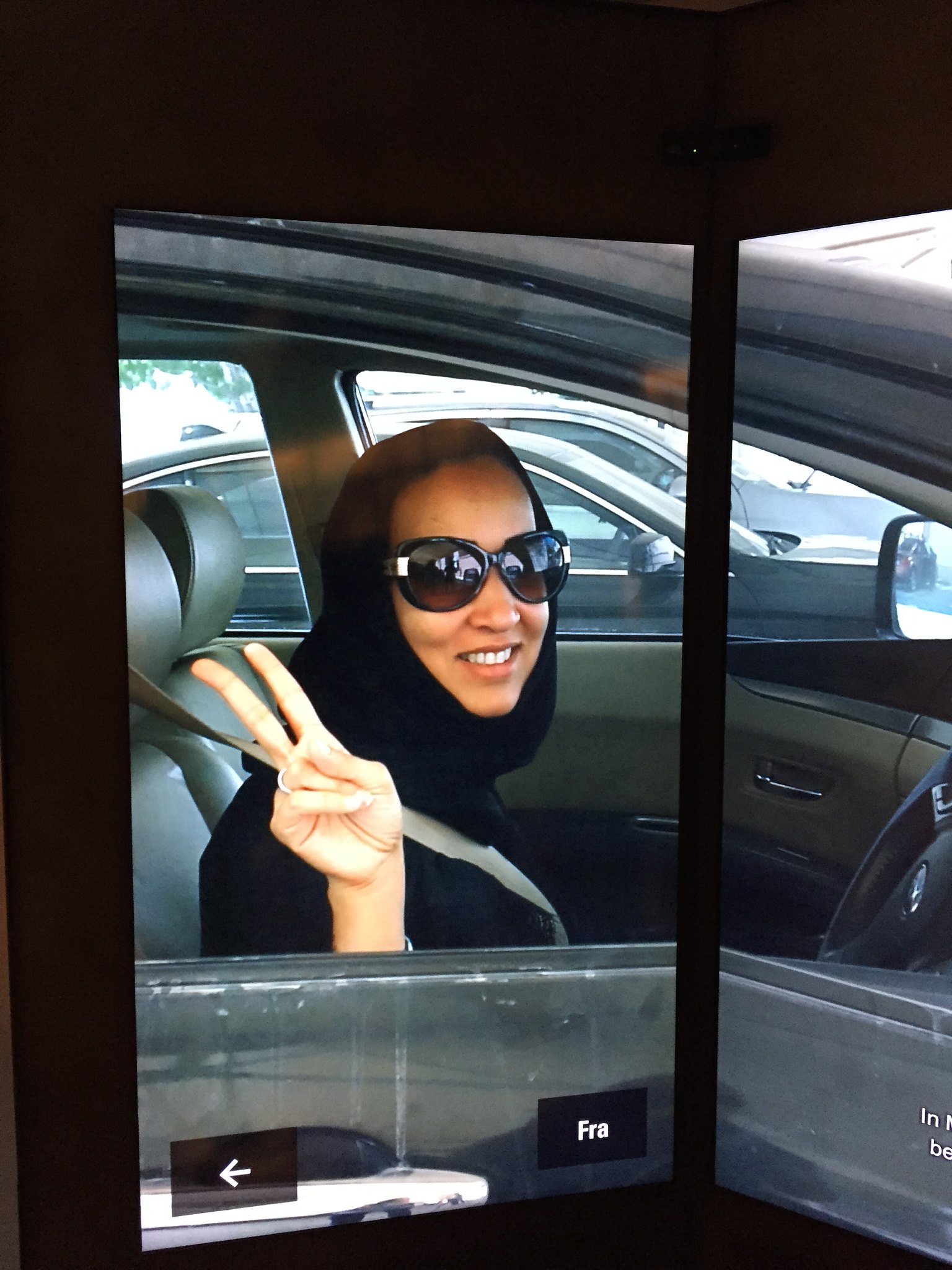 Very few women in Saudi Arabia are permitted to drive 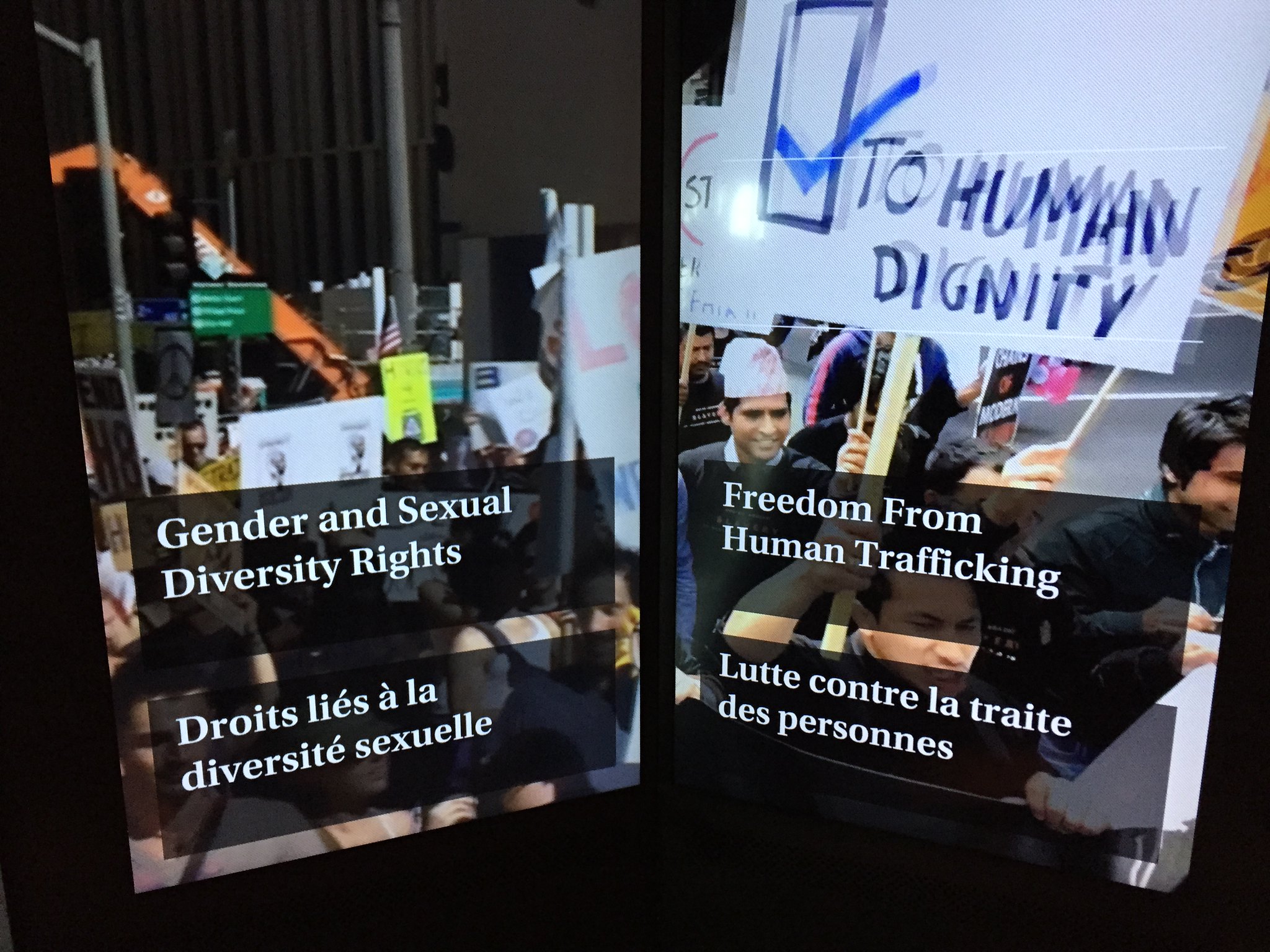 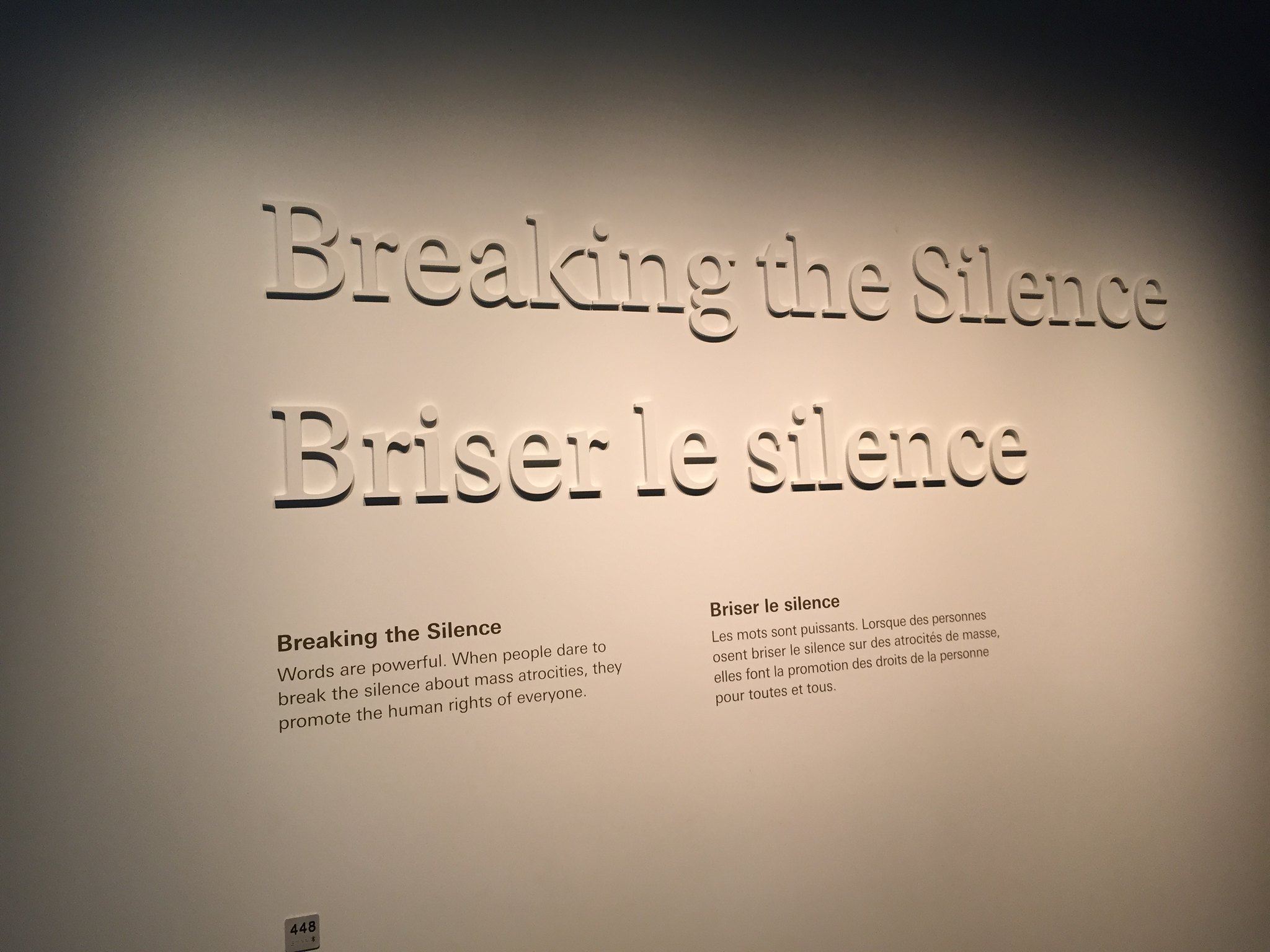 The Holocaust and at least 11 documented recent atrocities

Reading about the museum, I was informed that there were demonstrations by certain communities against the museum for its “unequal exhibits.” I read that some members of the Canadian Ukrainian community felt that the Holocaust received ‘too much’ attention as opposed to the Holodom0r, the man-made famine forced upon Ukrainians by the Soviets in the pre-WWII era, where anywhere between 2-7 million people perished.

The Holodomor was presented as part of a permanent exhibit that includes 11 horrific atrocities in the 20th century. The Holocaust received its own exhibit. Part of the complaints, as I have been informed, stem from the fact that a wealthy Jewish donor contributed a lot of money to the museum, and there is/was a perception that this may have influenced the museum’s content. While any human suffering is horrible, I do feel that the Holocaust deserves special treatment, as it was a very unique situation. Not land disputes or fighting between tribes — but rather an entirely scientific plan to murder millions of people — even at the expense of losing the war. Nothing like this has ever been perpetrated on humankind, and understanding how this could have occurred really does deserve special attention. 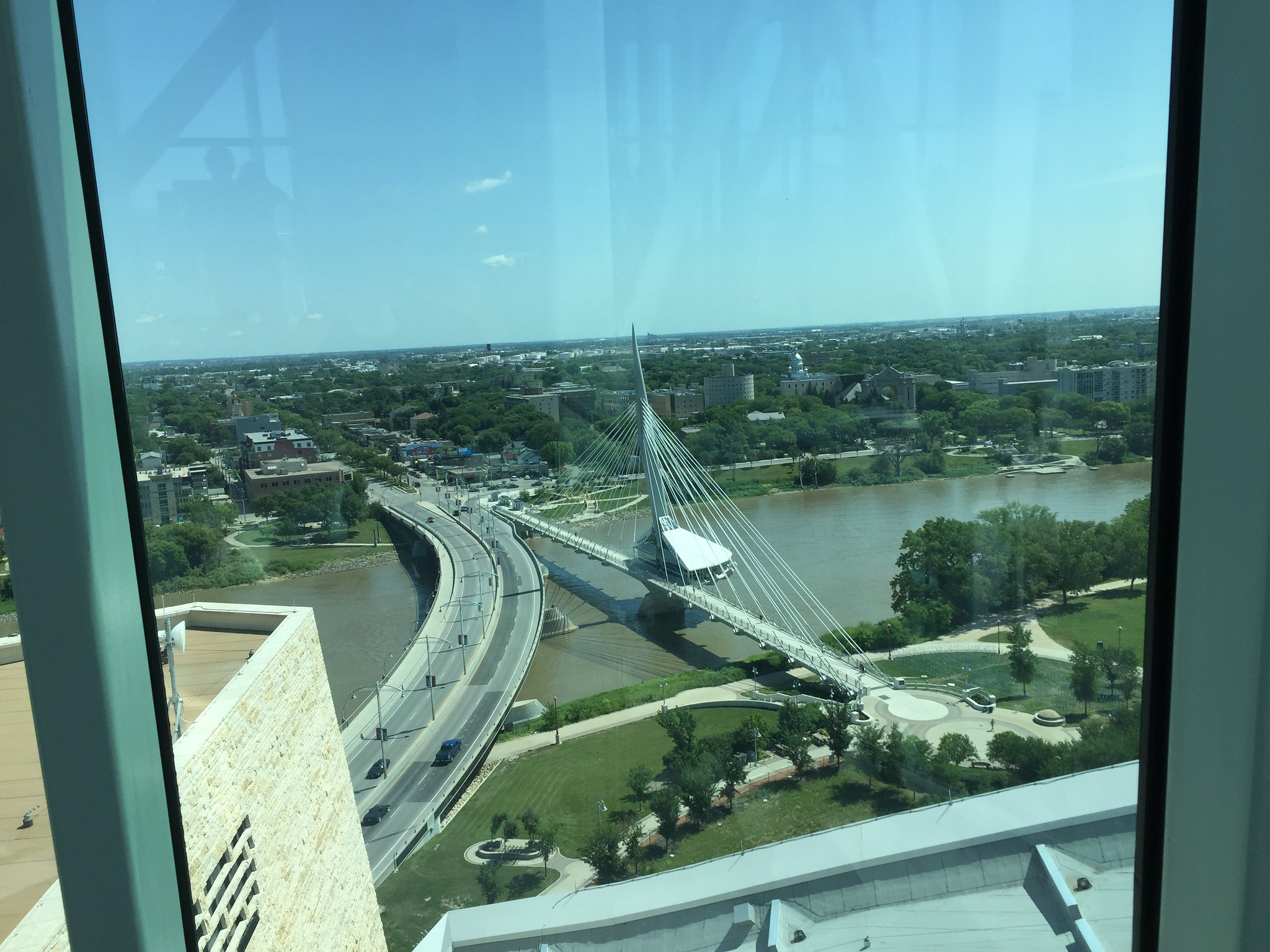 View of the city and into French-speaking St. Boniface from the CMHR tower

In summary — I strongly recommend to anyone who has an opportunity — if they end up in the middle of nowhere in central Canada — to visit the CMHR. Well worth a full day’s visit, and should be a must for every school child.

I am a Professor of Biochemistry and Molecular Biology at the University of Nebraska Medical Center in Omaha, Nebraska where I mentor a group of about 10 students, postdoctoral fellows and researchers working on endocytic protein trafficking. My first lablit novel, "Matter Over Mind," is about a biomedical researcher seeking tenure and struggling to overcome the consequences of growing up with a parent suffering from bipolar disorder. Lablit novel #2, "Welcome Home, Sir," published by Anaphora Literary Press, deals with a hypochondriac principal investigator whose service in the army and post-traumatic stress disorder actually prepare him well for academic, but not personal success. Novel #3, "A Degree of Betrayal," is an academic murder mystery that is now in press! All views expressed are my own, of course--after all, I hate advertising. http://www.stevecaplan.net
View all posts by Steve Caplan →
This entry was posted in Education and tagged Assiniboine River, Canada, Canadian Museum for Human Rights, Forks, Holocaust, Holodomor, human rights, Manitoba, Red River, Winnipeg, women's rights. Bookmark the permalink.

2 Responses to Right on: the only museum dedicated entirely to human rights