For months I have been avoiding a critical civic duty, and have abstained from writing about the political situation in the US. Not from a lack of conviction or interest in the situation. No, I find myself obsessed with the presidential race–so much so, that I check 8 different poll aggregates multiple times a day, to try to reassure myself. But I am not reassured.

Another reason I have not written on the situation to date is that there is a feeling that what more can be said?! We have a candidate, Mr. Trump, who (it has been said, accurately) lies every time his lips move. Mr. Trump tosses around incredible conspiracy theories–such as one that President Obama wasn’t born in the US and therefore is not a legitimate president, or that if he loses in the upcoming race, it is only because Secretary Clinton cheats and rigs the elections. He is utterly ignorant of international affairs, and too lazy to read, learn or pay attention to briefings. Worse yet, he points to his ignorance pridefully, maintaining that his (very debatable) business acumen will suffice. In the same breath, he will tell the public that he knows more about the Islamic State than the generals, and that he has all the solutions. Trust him. He’ll make it right. So fast, your head will spin. Like hell…

So much has been said, by so many, that my words are just a drop in the bucket. Perhaps the ocean. Or perhaps, keeping with the proper metaphor, a drop in the sewage tank. He has been described as having grandiose narcissistic behavior. Hundreds of former high ranking Republican officials, including the most recent Republican presidents and presidential nominees have refused to endorse him and stated that his candidacy is a danger to the United States. Centrist New York Times journalist, Tom Friedman, who has advocated for years that a stronger US needs more cooperation between Democrats and Republicans and a strong center, has simply described Mr. Trump as “a despicable human being.” Again, what more can I add?!

The last straw, the one that broke me and induced me to sit down today and spill my guts, was a minor one, in the scheme of things. A simple Tweet put out by Mr. Trump on Friday morning, but one that showcases who he is and how he behaves: 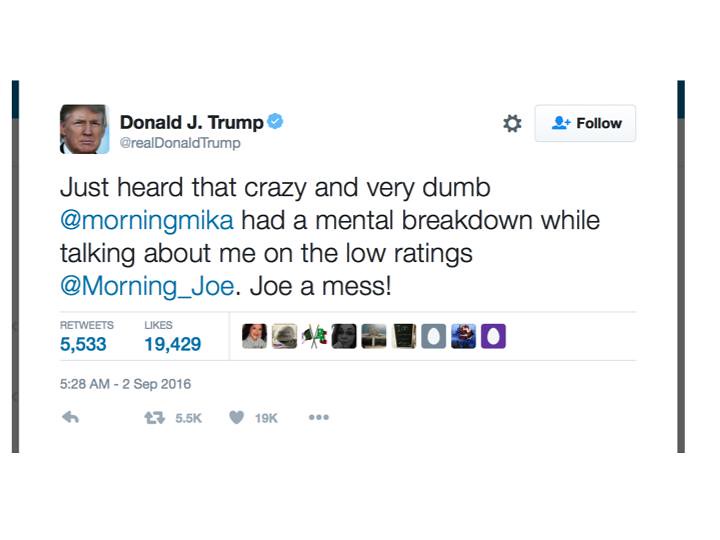 First, Mika happens to be the name of my daughter. So while that has nothing to do with the matter at hand, it managed to draw this particular characteristic and highly offensive tweet to my attention.

Is this the type of leadership, the role model for our children and our nation that we want? A man who did not know that the Russians invaded Crimea, and had no idea what Brexit was until he landed in Scotland the day of the referendum, has ample time to watch cable news on television and respond insultingly to every perceived slight? A man who has called women “fat pigs” and when asked which women would be suitable for his future cabinet, could not come up with a single name except for that of his own daughter?

I could go on indefinitely. Every one of his numerous lies, ugly and childish insults, bigoted and false statements, narcissistic ego-filled blustery comments and crazy conspiracy theories would be enough to sink any serious candidate. But that has not happened. Yet.

The exit from sanity, or Sanexit, that a Trump presidency would be akin to pushing us back to the middle ages. This is no longer a race between Democrat and Republican, between trickle-down economics vs breaks for the poor and middle class. It is not a contest between those who believe in the freedom of a woman to have an abortion against those who believe that life begins at conception. It is not a fight between those favoring stricter gun-control laws and those who oppose them. Nor is it a battle between those who want the Environmental Protection Agency (EPA) to impose stronger regulations on businesses and those who would disband the EPA. This election will go far beyond any such “minor” issues, and go to the heart of American society. This election will determine if the majority of Americans want rational, sane government, or whether their frustration is so great that they would put control of the country in the hands of an egotistic bully whose ignorance knows no bounds, and whose insults don’t either.

Only time will tell, and I will update over the next few months with my humble analysis on the situation. But for now, I need to get back and check the polls…

I am a Professor of Biochemistry and Molecular Biology at the University of Nebraska Medical Center in Omaha, Nebraska where I mentor a group of about 10 students, postdoctoral fellows and researchers working on endocytic protein trafficking. My first lablit novel, "Matter Over Mind," is about a biomedical researcher seeking tenure and struggling to overcome the consequences of growing up with a parent suffering from bipolar disorder. Lablit novel #2, "Welcome Home, Sir," published by Anaphora Literary Press, deals with a hypochondriac principal investigator whose service in the army and post-traumatic stress disorder actually prepare him well for academic, but not personal success. Novel #3, "A Degree of Betrayal," is an academic murder mystery that is now in press! All views expressed are my own, of course--after all, I hate advertising. http://www.stevecaplan.net
View all posts by Steve Caplan →
This entry was posted in Uncategorized and tagged Brexit, Clinton, conspiracy, Democrats, insults, president, presidential elections, Republicans, Sanexit, Trump, tweet, US elections. Bookmark the permalink.