A bit over a year ago now, sitting at Berlin central station after a three-day training seminar, sipping a latte while waiting for the train, I was chatting with a medical doctor/researcher at a big cancer research institute in Germany about “career impediments”.

Me: “My problem is that I say what I think. I mean, when something isn’t working, and it’s in the way of making progress with the project or whatever I’m involved in, I point this out, and I make suggestions for how I think this could be fixed. I just can’t help myself. It’s a bit of a problem because so many people tend to take it personally while I’m really just talking about the issues. But I don’t seem to be able to learn any lessons from that, either”.

Him: “My problem is that I believe what people tell me. Even when they’re joking.”

He wasn’t joking, I checked. I told him he’d won.

Which is the bigger impediment? 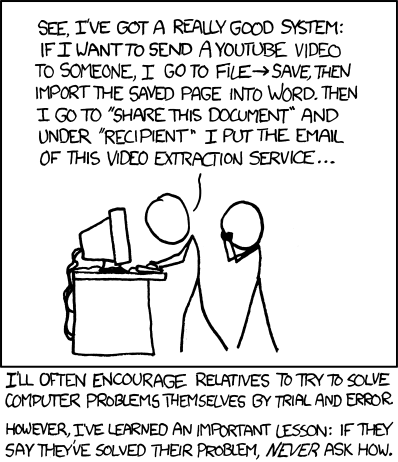 Once upon a time, I was an enthusiastic and hopeful biological oceanographer who did a bunch of work in the Antarctic. I was alternately wearing labcoats or extreme weather clothing and hard hats, but have long since swapped survival suits for dress suits and do science management, currently as the BioMedBridges project manager at the European Bioinformatics Institute. I still like to use my brain. I'm a German serial expat, currently - again - living in the UK.
View all posts by steffi suhr →
This entry was posted in science management, Silliness. Bookmark the permalink.