As promised in an earlier thread, here’s a photo from my wedding last August. 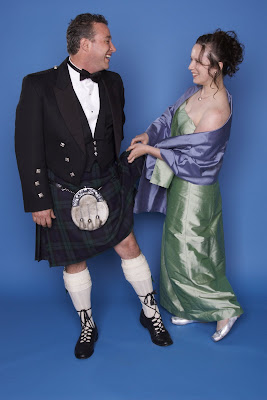 Living in Glasgow for 3 years gave me a true appreciation of men in kilts. There’s nothing sexier than a man with nice legs in a kilt, Scotland rugby shirt, hiking boots and rolled down woolly white socks. (This look was vetoed for the actual wedding). On my last weekend in Scotland, my lab took me to see Scotland play New Zealand at Murrayfield, and the place was full of my perfect men. I almost ripped up my ticket to Vancouver that day.

Mr E Man was born in Canada to one English and one Scottish parent, and within an hour of accepting his proposal I’d already asked him if he would wear a kilt. This isn’t actually his family tartan – it’s not available for rent in Vancouver, the Halifax rental place was all out that week, and it would have cost too much to buy one or to rent from Scotland. But the colours are the same.

The photos were taken by my friend’s boyfriend, Trevor Jansen. (Don’t worry, we paid him). One of Mr E Man’s sisters made the cake, and one of his brothers, who’s a roofer by day and a rock star by night, brought his excellent band (we paid them too). It truly was a family affair!

"one of the sillier science bloggers [...] I thought I should give a warning to the more staid members of the community." - Bob O'Hara, December 2010
View all posts by Cath@VWXYNot? →
This entry was posted in personal, photos. Bookmark the permalink.