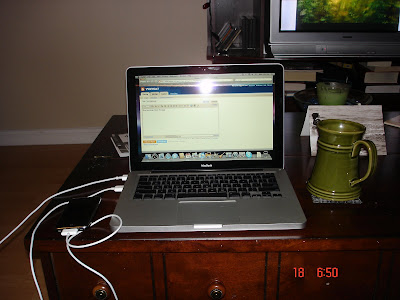 It’s very meta to post a photo of the draft version of this post
Yep, turns out the iPhone is a pretty powerful gateway drug. I’d already pretty much decided to get a Mac “at some point” (thanks all for your input!), but I was waiting for a freelancing/overtime (it’s complicated) cheque to come in first. Mr E Man knew all this… so when he came back from a shopping trip on Sunday and shouted “babe, do you mind if I give you your present early, and not wrapped?”, I didn’t expect him to thrust a MacBook into my hands! But he did… and I promptly announced that he could go and watch the hockey by himself, I was staying in to play with my new toy.
I’ve already had all sorts of fun with the trackpad and familiar programmes (internet, iTunes etc). I’ve got my free 30 day trial version of iWork to play with, plus iPhoto and all that good stuff, so I’ll watch all the tutorial videos over the weekend. Apparently the store where Mr E Man bought the Mac has a seminar for new Mac users on Saturday, which I should probably go to!
Expect lots of confused and/or excited posts/Facebook updates as I explore the new system…
Oh, and the name? When my younger sister was little, my Dad called her Tadger – Geordie dialect for young child / toddler. When we went on holiday to Scotland, he renamed her Tadger MacTavish. In France she was La Tadge, in Ireland she was Molly O’Tadge… that’s my Dad for you. But one name just stuck, and even though she’s now 30, my parents still ask me if I’ve talked to Tadger MacTavish recently. My sister has always been much cooler than me, so MacTavish seemed like a very apt name for my new toy.

"one of the sillier science bloggers [...] I thought I should give a warning to the more staid members of the community." - Bob O'Hara, December 2010
View all posts by Cath@VWXYNot? →
This entry was posted in family, photos, technology. Bookmark the permalink.