Take me out to the ball game

When I travel, I like to immerse myself in the culture of the country I’m in. Especially if it involves yummy food and drink*, or sport. So, when I found myself in the States with my family in 1994, I was extremely enthusiastic when my Uncle suggested that we go to a baseball game. The home-town team was the Columbus Clippers and, it being the summer of the major league strike, we even got to see (gasp!) the famous chicken, who was touring the minor league ball parks. It goes without saying that the famous chicken is not exactly famous in the UK, and most other aspects of the experience were equally foreign to us pasty Brits. It’s just a little bit different to the atmosphere of a premiership football game, let me tell ya! We payed very little attention to the actual game, but enjoyed the spectacle immensely.

I went back to Columbus in 1997, and my cousin again took me to see the Clippers. This time I had a better grasp of the rules, and even knew the words to the Clippers’ song. On the same trip we made my Auntie take us to see the Blue Jays play the Yankees, in Toronto on the 4th of July. It was the most boring few hours I’ve ever spent in a sporting arena; it ended 1-0, and we missed the one run of the game when we went to get beer. But hey, I was 20 at the time, had been legally drinking in the UK for two years but subjected to the draconian US licensing laws for three months, and getting beer was an end in itself.

In 2003 I joined my department’s slow-pitch softball team. My PI was in charge of the rag-tag bunch of Brits, Aussies, and the occasional Canadian who actually knew the rules and how to hold the bat (hint: not with one hand, like in rounders, and not like a cricket bat), and could actually catch in the glove (the rest of us reverted back to bare hands, the way we’d been taught). She’d grown up in Nebraska, where “there’s nothing to do except play baseball”, and was far too good for most of the rest of us. This bred some frustration for her, but the rest of us enjoyed ourselves immensely. I got a few RBIs for the team, and to everyone’s surprise made a crucial catch at home plate (it was either catch the ball or lose my teeth, and my self-preservation instincts kicked in).

So, my experience with baseball has been a mixed bag. Kinda fun to play, or to watch live with a beer in your hand on a sunny day, but I would never choose to sit down and watch it on TV.

For the last three years, though, I’ve cycled to and from work past the Nat Bailey stadium, a cute little arena that is home to the Vancouver Canadians. The summer crowds always looked like they were enjoying themselves, but that wasn’t quite enough of a draw to overcome my ambivalence and tempt me in.

The Foundation that supports the research done at my institute had been given a bunch of tickets by the Canadians, and were selling them at $11 a pop with all proceeds going to the charity. I’m proud to tell you that of the ~40 tickets sold, I was responsible for six, with members of my PI’s lab accounting for at least another eight. Jolly good show, chaps!

It was a beautiful night at the tail-end of the heat wave. The stadium was small, but adorable: 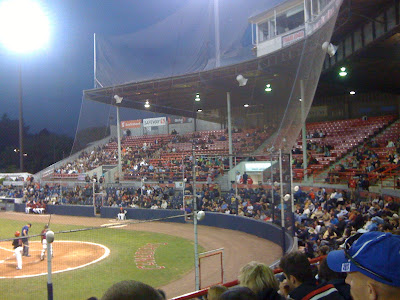 The view from our fourth row seats was great: 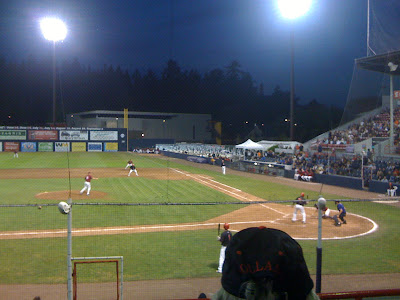 The between-innings entertainment was surprisingly amusing: 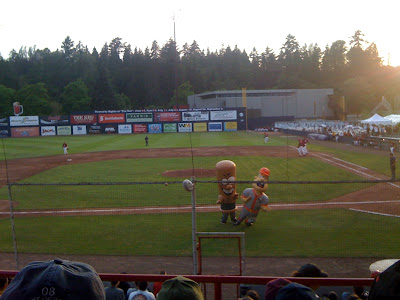 And we all had a good time, despite the beer costing the same as at a Canucks game! Oh well, at least they bring it to your seat. And my hot dog and pretzel were surprisingly tasty.

The game had its moments too. At one point in the seventh inning we were batting with the bases loaded, two outs, two strikes, and three balls, and it got genuinely exciting. But it really started to drag towards the end of the ninth; I understand the basics of the game, but don’t know anything like enough about it to appreciate the subtleties of the stalling tactics the two teams were using. Regulation time ended at 2-2, and we groaned a little bit as the tenth inning began. As that inning finally ended with no score, everyone around us got up and started heading to the exits, so we assumed the game had ended with a tie (hey, for hockey, rugby and football (i.e. soccer) fans, this makes perfect sense!). We only found out two days later that the Canadians lost in the twelth (twelth!!!) inning. Oh well, we weren’t really there for the game after all.

We’ve now added baseball to the list of things that are fun to do every year or two, but no more frequently than that. (Bowling and horse racing are on the same list). Our tenant’s seven-year old son disagreed, and wants season tickets. But the youngest Canadians fan definitely seemed unimpressed: 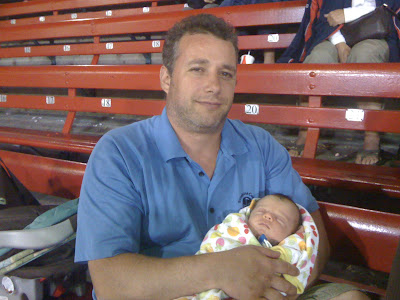 Morgan says “Baseball? Meh. When does the hockey season start?”

"one of the sillier science bloggers [...] I thought I should give a warning to the more staid members of the community." - Bob O'Hara, December 2010
View all posts by Cath@VWXYNot? →
This entry was posted in photos, sport, the 2009 baby boom, travel, Vancouver. Bookmark the permalink.

13 Responses to Take me out to the ball game