Cuba: Chan Chan and other songs

This is the song “Chan Chan”, from the Buena Vista Social Club album.

This is just as well, because we heard it an average of twice a day on our two week trip.

The music was one of the things I was most looking forward to before we flew to Cuba, and I was not disappointed. Music was everywhere – you couldn’t step into a cafe, bar, museum, rest stop or onto a beach without there being at least one live band.

And almost every single one – literally, every band we saw except for maybe four – played Chan Chan.

They each had their own version, of course, and different instrumentation, ranging from the standard guitar + mini guitar + drums to full seven piece bands with a stand up bass and a trumpet. And Chan Chan was the only song that they all had in common – we heard a wide variety of other songs from a multitude of genres, from rock to salsa to rumba to jazz. The quality of the musicianship was outstanding – even when the genre wasn’t really what I wanted to hear (e.g. the band at a rooftop bar overlooking the Caribbean, who played covers of old-school Western rock songs), the musicians were wonderful. 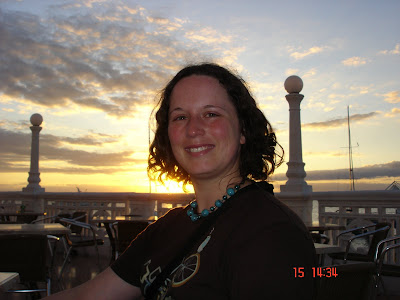 It would have been nice to enjoy this Caribbean sunset to the sound of Cuban jazz, rather than “Back in the USSR”.

Well, with one exception.

The music scene in Cienfuegos was not exactly hopping on a Sunday or Monday night, but we did manage to find one bar with a stage and speakers set up.  We grabbed a table and some mojitos, and waited expectantly.

The first people onto the stage were dancers. Four women, two in dresses and two dressed as male matadors, painted-on mustaches and all. Some pop music started to blare from the speakers, and they began their dance.

Now, I’m no dance expert. But to my eye, the four dancers were reasonably competent – as individuals. But their coordination with each other? Off by miles.

As the music switched to a flamenco pastiche featuring a drum machine and synth, the dancers effected a hasty costume change into flamenco dresses (the mustaches remained intact), and were suddenly joined by a singer.

He wore a garish purple tracksuit, and had a mullet.

What he lacked in musical talent (and that was a lot), he made up for in showmanship. Grand sweeping arm movements aplenty were proffered to the adoring crowd of his friends and family at the front, and at the climax of the first song, he sank to his knees as he belted out the final words like a drunken Glaswegian at karaoke.

Our new German friend turned to us and said, “we have come to the most musical country in the world. But we have found the worst musician in Cuba”.

Mullet Man aside, though, the music was the thing I missed the most when we came back home to rainy grey Vancouver. On my first day back at work, I went to my favourite sandwich shop, and was quite perturbed when there was no band to serenade me.

Luckily, we came back home with several new CDs in our luggage. Every band sells their own discs, and we traded CDs for either cash or the packs of guitar strings we’d taken with us (a tip from a friend who’s a musician and had visited Cuba before). Strings being hard to come by in Cuba, this went down very well indeed. One musician in Trinidad, a troubador named Israel Moreno, asked Mr E Man if he’d brought the strings because he played guitar himself. “No, but my wife does”, replied that traitor. So Israel handed me his beaten up guitar, with rusty strings and every fret scooped out by years of playing, and asked me to play.

I did very, very badly.

Mr E Man was very, very amused. (And got in lots of trouble, I can assure you). 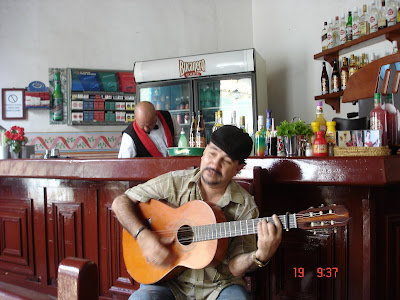 Israel Moreno and the guitar I tried to play. He was very encouraging and said I just need to practice more. I agree.

But I came back with more than CDs. My experience in Cuba has inspired to pick up my poor neglected guitar much more often than I have in the last couple of years.

"one of the sillier science bloggers [...] I thought I should give a warning to the more staid members of the community." - Bob O'Hara, December 2010
View all posts by Cath@VWXYNot? →
This entry was posted in music, photos, travel, videos. Bookmark the permalink.

6 Responses to Cuba: Chan Chan and other songs