Did someone say “cold”?

With whatever the current digital version of “mercury” is dipping to an overnight low of 25 below*, and an expected daytime high tomorrow of only two degrees higher, I for one am not planning on venturing outside unless I absolutely have to. Even though tomorrow is Family Day, a holiday of dubious provenance that I’ve lightly complained about before.

This prolonged cold snap is also having an effect on the local wildlife, it seems. Our local Cooper’s Hawk appeared yesterday, fluffing itself up against the cold while gobbling down a tasty meal to keep its metabolism ticking over nicely. I suspect the hapless victim was yet another Mourning Dove, a species that seems to spend most of its time sitting still and pretending nothing’s going to eat it. I’ve long since given up keeping score, but since first appearing some nine years ago or so, the hawks are definitely winning. Mis-identified in that blog post as a female Northern Harrier, our backyard visitors all along have almost certainly been juvenile Cooper’s. Bloodthirsty things. 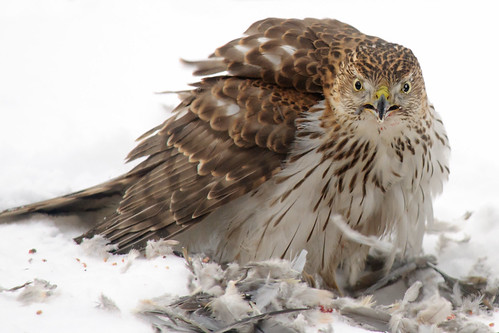 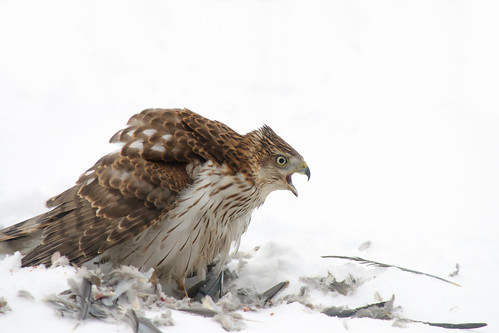 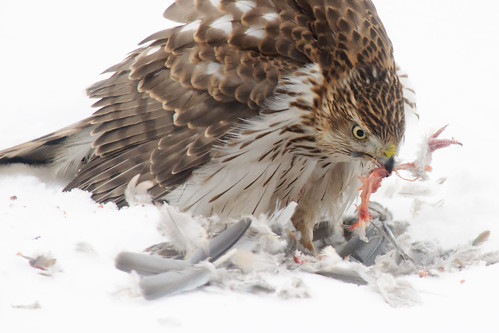 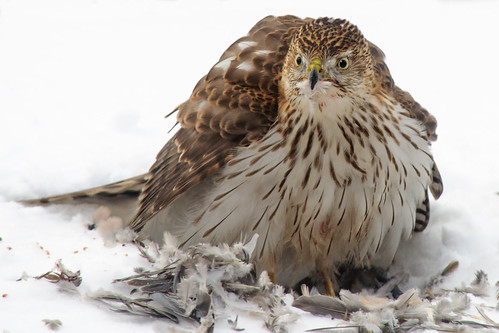 *Those are Celsius temperatures. For US-based readers, that’s minus 13 Fahrenheit. Still pretty cold.

I am Canadian by heritage, and a molecular biologist and human geneticist by training. My day job is Assistant Director of a large genome centre, where I do various things along the lines of "keeping the wheels on". In my spare time, I tend to run around with a camera, often chasing race cars, abandoned barns, and sundry wildlife.
View all posts by Richard Wintle →
This entry was posted in Nature, Photography and tagged backyard, bird, hawk, Photography, wildlife, winter. Bookmark the permalink.