This year’s announcement regarding successful applicants for Royal Society University Research Fellowships (URFs) has been hailed with deep suspicion by many. Out of 43 awards only 2 went to women and there is no getting around the fact that this is a dismal result. Paul Nurse, the President has published a statement spelling out, not only his disappointment at this outcome, but also giving the statistics since 2010 (see below). There are many ways of trying to unpick the data and the Society will be considering why this year women have been so spectacularly unsuccessful: Paul has called for an internal investigation and I will be very interested to see what the outcome is. As a Council member I have asked Paul that Council discuss this situation, and I am not alone in making this request, although it may be wise to wait to discuss the results once the investigation has been completed. 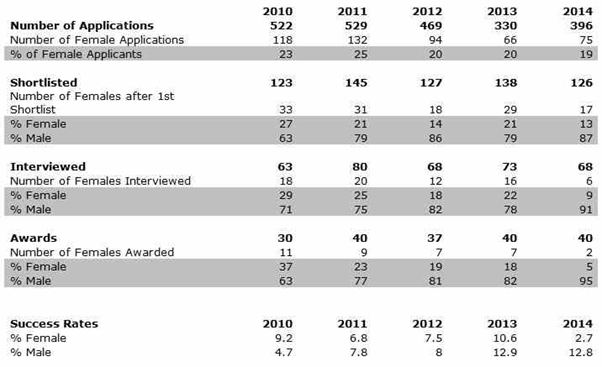 As the table shows, in previous years the percentage of women appointed has been essentially in line with the percentage applying; indeed in 2010 women did rather better than that and had a significantly higher success rate than the men. In succeeding years the success rates for men and women have been broadly similar, that is until this year. I would like to think this is just a fluctuation, but it certainly warrants examination.

However, while that internal investigation is being carried out, and while the community is lambasting the Royal Society, it is perhaps worth pointing out a few points for reflection by all. Firstly, as previous years’ data show, I don’t think the Royal Society can be said to be permanently showing deep prejudice towards women applicants. I have in the past been accused essentially of being an apologist for the Royal Society. I don’t think I am. I think it is simply the case that being a female fellow I have a better idea of what is going on than many outside, who tend to assume something as venerable as the Royal Society is likely to be so ‘Establishment’ it must be full (as its portraiture is) of bewigged old men who want to treat it as a gentleman’s club. Not so. I have always found it welcoming and it has offered me many interesting opportunities (see here and here) to participate and contribute to its work, not tried to exclude me from its ‘corridors of power’, as it were. I have encountered many more hostile atmospheres in which to work than Carlton House Terrace! I should also point out that I was myself one of the very first tranche of URF’s appointed back in 1983. I have no idea how many women were appointed that year, but I don’t recall being the only woman (although I do recall my fellow URF’s including a lot of men).

So what is going wrong? And where in the system?

If we break down the application process into its component parts we can identify the different stages where things may be going wrong. All that follows can only be speculation, but I hope quite well-informed speculation. Firstly, do women apply in proportion to their numbers in the pool? It’s hard to tell, because of course the numbers cover all disciplines and physics, for instance, will have a very different percentage from zoology (biomedical scientists are likely to apply to the Henry Dale Fellowship competition, which is why both numbers overall and the percentage of women has dropped since their introduction in 2012). My suspicion is that not all the talented women out there are given enough encouragement to apply and, lacking such encouragement they may feel that they aren’t good enough. So my first recommendation (which, like all of my recommendations, is highly personal) to the whole community is:

If a young researcher does apply, then those around them should also take responsibility for looking at their applications. It is tough when first setting out to know how best to write up one’s CV and proposal to make the best of what you have. If no one reads the application, is the case being undersold? Again, this should be a responsibility of all those around the young researcher but I fear too often women may hold back from asking for such help for all kinds of reasons. This is something outwith the Royal Society’s control: it lies, again, with the community, so my second recommendation is:

One thing I hope the Royal Society will do is consider whether the way the application form is structured might in some way disadvantage certain groups of applicants. The ERC decided to modify its forms to try to ensure that everyone wrote up their CV/track records in the same sort of way, to reduce the blagging and the differences in customary style between different parts of the EU. It hasn’t solved the gender difference (see here) but it probably reduced it somewhat. For the Royal Society, I would recommend:

Whether it is possible to carry out blind reviewing at this stage, I’m not sure. I’ve never sat on any of the panels or observed them in action at long- or short-listing stage. Applications, I believe, could not be anonymous because of the need to demonstrate track record through publication lists etc, but possibly first names could deliberately not be requested to be written out in full. However, as we proceed through the different stages of the selection process to interviewing there are some other places where problems may arise as much from community behaviour as the Royal Society’s.

Letters of reference, for instance, are too often full of subtly gendered words. If you don’t believe me, look at this article or read my previous writings (here and here) on the subject. If you write letters of reference for an applicant, are you prone to describe a woman as a good team player and excellent at looking after the project students but a man (with exactly the same characteristics) as original and innovative? Too many of us use different sets of words to describe men and women quite unconsciously, but it can have a devastating effect on the women’s chances. It is all very well to give unconscious bias training to panels – and it should definitely  be done – but it is very difficult to override a negative impression given by a letter of reference because of the careless use of words, even if there may be a suspicion that this is has occurred. Hence my recommendation four is:

Women are also known to be less likely to be cited, a fact that HEFCE should bear in mind as it goes through its current discussions about the possible use of metrics when it comes to funding decisions. I have no real idea of why women should be less cited, but the evidence is there that this is the case. It would seem unnatural to suggest to the community that they should consciously go out of their way to cite work by someone simply because they are a woman, but perhaps this is what it would take to level this particular bit of the playing field. At the very least, panels should be very aware of the problem and not use metrics slavishly and without thought.  This is probably particularly important at long- and short-listing meetings.

In 2010, when interviews were introduced in the URF process, we had a bumper year for women. I naively thought that maybe all these cumulative unconscious microinequities were being overruled by their articulacy and ability to put their ideas across at interview. I saw that year’s data as demonstrating that all was well, but sadly this is clearly not the case. So I guess the Royal Society should look again at the interview process. Are all candidates being treated equally or were some panels prone to put individuals on the spot rather than genuinely find out their abilities? It will be hard to look at this retrospectively but it is something that needs to be thought about for future years.

I’m not aware there are observers at the panels in the way that Council members attend committees looking at fellowship elections; perhaps that could provide some way of normalising procedures between panels for the future and to check that nothing untoward is happening. That would be my personal next recommendation, along with unconscious bias training for the panels in advance.

In addition, if there were a group of observers they could be used to facilitate interweaving lists from different panels, because they would have seen what the relative strengths of the field are between mathematics and ecology, geophysics and developmental biology and so on. This would be a huge ask of some people but perhaps it is what is needed. In fact, such a group of observers might be asked to draw up the final list of names, given the rank-ordered list each panel produces.

I personally do not believe there are large, systematic problems, let alone collective ill-will direcgted at women, but clearly there are problems of some sort. I am sure I have failed to identify many possible issues that could be playing a role, because I haven’t spent enough time doing this. Some require more action outside the Society, some processess must be improved internally. At the end of the day we mustn’t think there is a fixed percentage of women that is ‘right’. It will fluctuate year by year and introducing some sort of quota would be anathema to candidates and the Society alike, I imagine. But equally we mustn’t assume that because nothing is grotesquely going astray (and even that is a dubious statement this year), there is nothing that can be done. Something could, should, indeed must be done.

There are no doubt many other suggestions people will want to make, and those who have either been through the process (particularly those interviewed) or sat on panels may have much useful hard evidence to adduce. My thoughts here are quick personal reflections and should not be taken as representing anyone other than myself. I hope that this year will, in the future, be seen to have been merely simply a statistical blip (although see this interesting post for how ‘blips’ can occur). If it is more than that even more soul-searching will be required.

Update October 6th 2014: An analysis by Rebecca Roisin considers different scenarios using simulations which provides some interesting context. Additionally, Julia Higgins discusses the issue on BBC Radio 4’s  Inside Science, suggesting that women may be seeking URF’s slightly earlier in their research career than men (directly after the Dorothy Hodgkin Fellowships they may have held, for instance) which could have the effect of making them look less strong if this factor isn’t properly accounted for. No doubt such possibilities will be looked at in depth by the internal investigation.

12 Responses to Is the Royal Society Treating Women Fairly?