There are usually only a handful of people in anyone’s life who can honestly be said to have had a radical impact on how that life turns out. Yesterday I learned of the death of one of my key mentors, Professor Ed Kramer who was one such person in my own life. I feel desperately sad at his passing. Not only an amazing and inspirational scientist but someone who supported, shaped and mentored so many of us. Living 6000 miles away my contact with him over the last 30 years has been limited, but I knew he was always there in the background, metaphorically cheering me on. My last email exchange was just before Christmas when we traded our Christmas letters by email for the first time, both of us having moved house at around the same time and lost each other’s new home addresses. I will always treasure the two years I worked with him as a postdoc as the most amazing, exhilarating and eye-opening period of my entire scientific career.

I went to work with Ed almost by accident during my years at Cornell University. Having completed a PhD on the electron microscopy of metals at Cambridge I went to Cornell to work with another professor in the Materials Science and Engineering Department continuing this line of work. The ensuing two years were miserable, unproductive and merely convinced me the sooner I got out of academia the better. The problems were many and various and at least some of them were of my own making. As the end of the two year position approached I had to find another position to enable me to stay in the USA while my husband finished his PhD. I approached Ed, who at that time was still working in his original field of (low temperature) superconductivity, but he had just hired the microscopist he needed for that project. However it transpired he was also looking for someone to work on the electron microscopy of polymers – the new field he was just getting going in. He agreed to take me on, despite my completely disastrous stay so far in Cornell, having checked up on me sneakily with my PhD supervisor when attending a conference in Cambridge at just about this time. (A conference, I may say, that was held in this very same college of which I am now Master and which always went by the name of the Churchill Conference amongst polymer folk.)

I did wonder if I was mad to make what felt like the huge leap from metals to polymers but, given I felt I had nothing to lose, I took things very seriously. I spent the summer before I switched projects mugging up on polymers and tried to get to grips with what was known about their mechanical properties and, specifically, the topic of crazing. You probably won’t know what a craze is, but it’s those thin white lines you see in a well-used Perspex ruler representing damaged zones which possess an internal microstructure on a scale to scatter light.

Known to be a workaholic he was also at that time seen as slightly intimidating by his students (many of whom were older than me due to the length of US PhDs relative to UK ones). I merely found him intensely serious and involved with his work. The intimidation I felt was only ever that generated by being with an intellectual giant. I had a clear line of work laid out for me and got stuck in. And soon showed what an experimental klutz I was by managing to put my sample into the electron microscope not flat in the way that I was supposed to but slightly tilted. Ed, being the amazing man he was, took one look at my images and could see that I had completely inadvertently and incompetently managed to photograph something that had the potential to prove a pet theory from one of the great and good in the field. I was challenged to go back and do it again, on purpose, to get some stereopairs for good measure. So it was that, literally within 6 weeks of starting that project, we were submitting an abstract for the American Physical Society meeting the following March. I was on a roll, and for the next 2 years it continued.

Ed – and I always insisted on calling him that, whatever the rest of the group did – and I used to talk for hours every week, if not every day. We sparked each other off. I learned so much although he was always unobtrusive in his instruction. He also quite deliberately set me challenges. I well remember in those first few weeks, when I had the images that looked so promising, he tossed a draft of the manuscript he’d written on my desk about this unproven theory of the growth of crazes and asked me to see if I could find the mistake in it (which was why it was still a draft). I felt so triumphant when I worked out what was wrong, but also it gave me confidence I was beginning to understand the field.

So, Ed took me as he found me and then made sure I fulfilled my potential. He inspired me to work harder and harder so that I willingly became a workaholic like him (maybe this isn’t really a very good recommendation, but at the time it felt wonderful; such a buzz!). When my husband got a fellowship back in Cambridge during that first year there were some very sticky moments at home: I realised how much I didn’t want to walk away from this project that I was only just getting my teeth into. This problem was sorted when my husband himself got a year’s postdoc at Rockefeller, with the dispensation to work every other week back at Cornell. It has to be said that the grass-widow weeks were the weeks I worked ridiculous hours with enormous enthusiasm. I had, fortuitously but with great good fortune, stepped into a project where so much of the necessary but tedious groundwork had been already laid by someone else and the results just kept on coming. A high of the like I have never had since, with Ed there constantly throwing new ideas into the mix and finding new directions to push us off into. If he disappeared for a few days it usually meant he’d holed himself up in the library to come back with yet more ideas for us to test out. Even there to teach me to write good prose: one thing I learnt from him and have never forgotten is not to start a sentence with ‘This shows…’ or ‘This is..’ without specifying what the ‘this’ is, as in ‘This problem was sorted..’ a few lines above.

The one thing I taught Ed was when he wanted to get back into doing his own experimental work. With enormous trepidation I had to teach this 40 year old full professor how to make the thin film samples he needed to do mechanical testing for a consultancy project he was working up with IBM. That was fairly nerve-racking, particularly given my own propensity to drop samples on the floor or otherwise mess up, but also because it felt such cheek to be teaching him anything. He was a ready pupil, though, and I don’t recall it ultimately causing either of us any embarrassment. He always brought out the best in me.

It wasn’t enough for Ed that I was flourishing scientifically, he wanted to make sure I got known by others. He packed me off to give seminars in various universities around the USA, my first experience of this, he introduced me to the top professors in the field when we went to meetings, made sure I joined them for dinner (did they think this was odd I wonder in retrospect?) and would be remembered by them. That I was a woman (at a time when they were still very thin on the ground, to the extent that I had been the first female postdoc in the department when I’d arrived) never bothered him at all. I was simply someone at whom he could toss ideas and theories for us to dissect at length. He even made sure that I met a visiting academic from Cambridge who passed through Cornell to ensure that I had a lab back here that I could attach myself to when the postdoc position did finally finish and my husband returned to Cambridge to take up his fellowship. What more could one ask of a mentor? Inspiration and practical support offered freely day by day.

When I returned to the UK he was still always there in the background giving me encouragement. Not a great letter-writer (or its more modern version of email), nevertheless if I needed advice or a reference letter Ed was always more than willing to step in. His constant encouragement persisted right to the end. I last saw him in 2010 when we were both speaking at a conference in the Peak District (he had by this time moved to UCSB). My talk did not go well. Why? Because I realised, with hindsight, that having him in the audience made me nervous! My great early mentor, who meant so much to me, and what had I to show for myself? Had I lived up to his expectations or was my work now, so far removed from what we had worked on together, somehow lesser and regarded by him as unworthy?

I sat next to him at the conference dinner and we talked and talked (I apologised afterwards to the poor person who sat on the other side of me whom I ignored the entire meal). I probably knew then I was unlikely to see Ed again, but he continued to be wonderful and it was a total delight to have those last few hours of conversation with him. I had been worried that he would think that I was wasting my time with the gender work I had got so stuck into by then as a distraction from real science, but far from it. He obviously had been following what I had been doing and told me how important he thought it was. Despite the fact that he always chose, as far as possible, to avoid heavy administrative tasks that took him away from the science he loved, he respected those who chose other paths. He left me feeling reassured and upbeat. 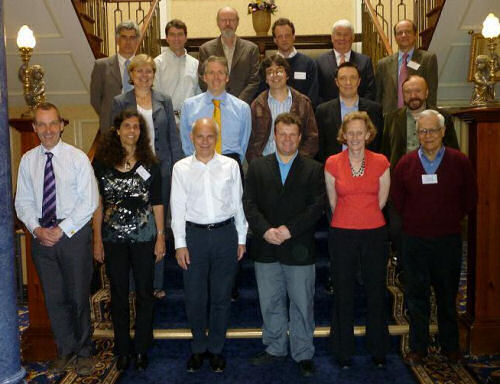 Photograph of the speakers at the High Polymer Conference 2010. Ed is standing next to me at the end of the front row.

So, here am I, just one of his many, many students and postdocs whom he inspired, instructed, encouraged and supported by word and deed. I can think of a substantial number of these who now hold senior positions in universities around the world. How many of us would have succeeded without his mentorship, his intercessions and his wisdom? I know I am not the only one who would have turned away from academia without his input and encouragement. What a giant he was, what a difference he made to the field of polymer science. And how much he will be missed.

Professor Edward J Kramer (1939-2014), survived by his wife Gail, his two children Eric and Jeanne and their children.

2 Responses to Losing a Mentor