Churchill is often seen as the supreme leader, a man whose very voice inspired a nation and who held the country’s nerve during the Battle of Britain. Less often discussed is his leadership and behaviour at other times, although increasingly there are biographies that are far from hagiographic, one notable example being by a Churchill College Fellow, Nigel Knight. The title of his book – Churchill: The greatest Briton unmasked – gives his thesis away. There were many periods of Churchill’s life when his behaviour was not quite so heroic or successful as during those crucial 2nd World War years. My own grandfather, a clerk in the House of Commons after the 1st World War, could not forgive him for ‘crossing the floor’ by switching parties (twice in fact).

One man with whom Churchill dealt with a great deal during the years of the 2nd World War was General de Gaulle, from 1940 the leader of the Free French in London, operating out of a house commemorated now by a plaque in Carlton Gardens, a mere 100m or so from the Royal Society. As part of the events marking the 50th anniversary of Churchill’s death, the Musée de L’Armée in Paris in has put on an exhibition simply entitled ‘Churchill – de Gaulle‘. It charts their individual lives and how these became inextricably linked during the 1940s and ’50s.

I was fortunate enough to attend the inauguration last week at a formal event at the museum , an event well supplied with champagne courtesy of Churchill’s favourite supplier Pol Roger. At the associated formal lunch I had the pleasure of meeting members of de Gaulle’s family as well as a trio of Churchill’s own descendants: Randolph Churchill, Emma Soames and Celia Sandys (good friends all to Churchill College). I also had a tour of the exhibition courtesy of the College’s archivist Allen Packwood. The College Archives had supplied many (I believe around 60) of the exhibits on show and Allen and his team have been heavily involved in the curation and catalogue preparation. He gave us a fascinating insight into their lives and times. I would encourage others who find themselves in Paris to pay a visit to the exhibition.

Churchill and de Gaulle did not have an easy relationship. Churchill said of him

“He felt it was essential to his position before the French people that he should maintain a proud and haughty demeanour towards “perfidious Albion”, although in exile, dependent upon our protection and dwelling in our midst. He had to be rude to the British to prove to French eyes that he was not a British puppet. He certainly carried out this policy with perseverance”.

This suspicion cut both ways and there was much tension and disagreement between them, De Gaulle remarking

“When I am right, I get angry. Churchill gets angry when he is wrong. We are angry at each other much of the time.”

The suspicion on de Gaulle’s part was well-founded, as Churchill had indeed wanted de Gaulle removed from his leadership of the Free French. In the iconic image, below, of the pair of them walking up the Champs Elysées in 1944, their body language says a lot about their relationship. Curiously, this is the image used to front the exhibition! 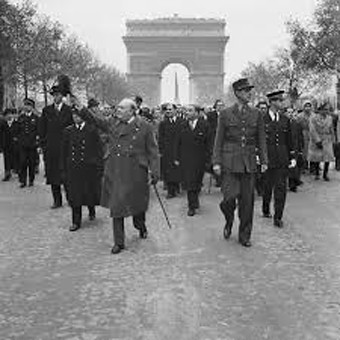 Continuing with the theme of Churchill and leadership, as its own part of the Churchill 2015 festivities, the College has been working with CSaP (Cambridge University’s Centre for Science and Policy) on a theme of scientific leadership and policy. This is a topic close to my heart that I initiated as the College’s contribution to the compendium of Churchill 2015 panels running during this year. This coming week will see CSaP’s annual conference, actually focussing on what the Humanities have to offer Government policy-making, followed by a panel discussion I will chair regarding the role of evidence and analysis in effective policy making. We are lucky to have Lord Peter Hennessy setting the scene with a keynote address and he will be joined by former Home Secretary Charles Clarke, Lord Richard Wilson (former Cabinet Secretary and Master of Emmanuel College) and Sir Richard Mottram (former Chairman, DSTL). Daunting company for me to be keeping but it should make for a fascinating discussion.

The second day will involve early-career civil servants and researchers in a policy professional development workshop led by senior researchers and policy specialists including James Wilsdon from SPRU and Churchill Fellow David Spiegelhalter. The latter has an enviable reputation in making sense of badly-reported statistics and has recently been much in the news regarding his new book on statistics as related to our sexual habits. My role is again at the end of the day, when we try to pull things together to consider road blocks in linking scientific advice to policy making and how things could be improved.

As my inner impostor reminds me, my track record in anything looking like science policy is relatively short in duration. But these matters are really important. Just last week I wrote over at the Making Science Public blog

‘Some scientists, some of the time, most certainly should [worry about political science communication] or our government will have an even weaker evidence base on which to build when it comes to key decisions.’

It is important that junior researchers and civil servants have a chance to learn from each other so that there is some hope this science-policy interface will improve. But our House of Commons is a sad reflection of our education system with its absence of scientifically-trained MP’s, who are too often also scientifically illiterate (not the same thing) and so may not be well-placed to receive and understand good advice if and when it comes from their civil servants.

Churchill himself relied very heavily on a single man, Frederick Lindemann (Lord Cherwell), but he had many other senior scientists working around him during the war years including this College’s first master Sir John Cockcroft. This group surrounding him certainly often did not agree with each other (take Lindemann and Henry Tizard as a case in point) but at least they were there, tossing ideas around and formulating crucial policies. We have little that is equivalent to that now. One consequence of this is that, whatever sound bites politicians may utter about the excellence of UK science, they do not believe in it enough to commit to keeping the science ringfence or provide any uplift in the budget. As I write in today’s Observer, fine words butter no parsnips when it comes to funding.