This past week I have learned some things about our Parliamentary democracy I have never previously known I needed to know. I also got decidedly cross. It started with a tweet, a tweet from the Parliamentary Science and Technology Committee proudly proclaiming its new membership: all male. 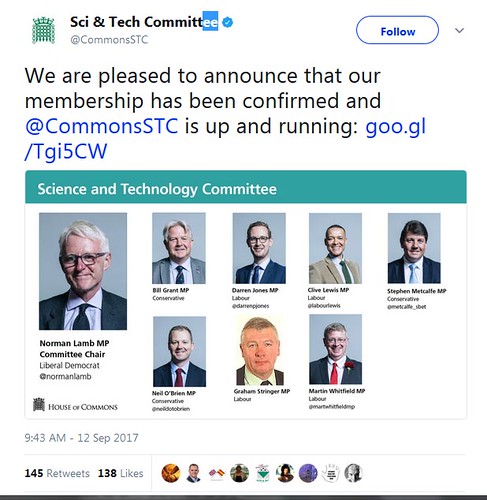 Not good enough said Twitter in response as it erupted in fury, myself included. Some thought to contact the Chair, Norman Lamb. In fact he didn’t have the authority to do anything, as he made clear in the letter he wrote to the party whips, where he also made absolutely clear that he felt this was unacceptable. Myself, I wrote to Jo Johnson as Science Minister who responded that he felt this meant the committee lacked basic legitimacy, with which I could agree. But he couldn’t do anything either. If you want to read more about the initial mess, I wrote in both the Guardian and the THE, emphasising different aspects. I won’t repeat the arguments I’ve already given there. I want to write about what I’ve learned since, helped by completely coincidental conversations with two relevant and involved (female) MPs.

It is the case that the committee was correctly selected according to the rules. I think this makes it clear just how inappropriate these rules are for today. They are only a few years old, but this farce makes clear how distortions can occur through nobody’s ‘fault’. What is interesting is the complete lack of oversight of the process. It is just like conference platforms with all male panels, or a list of invited speakers where the gender balance is way off kilter. In both these more academic situations the imbalance can be easily rectified if someone – the conference chair or perhaps the organisation committee – just takes the time to step back and look at the representational balance. And then do something about it. But, in Parliament, who might be in a position to do that?

It isn’t Norman Lamb and it isn’t Jo Johnson. Or, more generically, it isn’t the Committee Chair or the Minister. Furthermore this isn’t a problem only about the S+T Select Committee: the Welsh one is also all male. (I don’t know if a similar uproar was occasioned there.) This problem is about an unsustainable process. Just think if you ended up with a committee made up entirely of MPs from London, or with degrees in PPE; the only kind of balance required by the process is in terms of party.

As it happens I bumped into Chi Onwurah (Shadow Minister for Industrial Strategy) this week at the leaving bash* for Mark Walport on Thursday as he transitions from GCSA to CEO of UKRI (apologies for all those abbreviations: from Government Chief Scientific Advisor to Chief Executive Officer of United Kingdom Research and Innovation, the new super Research Council). Chi had apparently spent most of Wednesday rushing around the House trying to discover who was responsible. She was told that ultimately it was the Leader of the House, Andrea Leadsom, although this fact doesn’t seem to have got out into the wider world. I am not aware Leadsom has said anything on the subject so far, because I believe she should – if it is indeed her responsibility – be requiring an investigation into the process and coming up with new guidelines.

However in the wake of the original tweet, it was pointed out that the all-male nature of the committee could be rapidly remedied as there were three outstanding vacancies. I have not been able to establish why the eight names were announced before the full slate was complete. However, it is clear that in the wake of Lamb’s letter to the whips the Conservatives sprang into action seeking further names for their two remaining slots; Labour has one slot still to fill (I have not heard that anything has happened on that front so far). Within Conservative ranks, it seems that all the process consists of is for people to put forward their names; there is an election if too many stand. I have no idea if, for the original eight, there was an election or if eight was the sum total of people (all right, men) prepared to stand. But two more names came forward from the Tory benches on Wednesday evening: Vicky Ford and ANO and duly elected on Thursday (I’m sorry, I can’t find out the second name is, who although I’m sure I saw the name on Twitter at some point; he was male).

I met Vicky Ford on Friday night, again totally coincidentally (this time at the dinner celebrating the enormous amount my VC, Sir Leszek Borysiewicz, always known as ‘Borys’, has done for the university as he steps down). Her credentials are impeccable for the S+T committee: a degree from Cambridge consisting of a Part I in maths and a Part II in economics, followed up by working in finance and then as an MEP. leading the European Parliament Internal Market and Consumer Affairs Committee before becoming an MP at the last election. She is clearly delighted to be joining the committee and was wanting to hear from all of us about the key issues science faces. She was talking to the President of the Royal Society (Venki Ramakrishnan) about mobility and the issues for postdocs when I joined them. I am sure she will be an excellent addition to the committee, but I would not personally want to be joining it under these circumstances. As I wrote earlier in the week, it seems to me – lacking basic legitimacy, as Jo Johnson put it – the committee should be torn up and new nominations sought.

There is an additional wrinkle in all this. What are the credentials to join this committee? Absolutely none (other than to be elected). I do not believe a degree in a science subject should necessarily be a pre-requisite. Indeed it is deeply troubling that Graham Stringer, with a bonafide Chemistry degree, is the one who is a climate-change-denier, working as a Trustee for Nigel Lawson’s Global Warming Policy Foundation. However, again I would like to see some attempt at balance so that there was credibility in its determinations. As it stands, without any scrutiny of its composition, that may end up not being the case. Some readers may remember David Tredinnick was a member of this committee from 2013-15; yet he is a believer in the curative power of homeopathy (beyond a placebo effect presumably) and that astrology has a role to play in medicine, according to his Wikipedia page. Those views are not a good recommendation for someone to sit on this committee, but if someone with those sorts of views wants to stand and no one else opposes them, they get elected.

Now I know more about these processes, I do not feel optimistic about their decision-making ability, however hard they work. I do not feel that balance on any front is ever necessarily going to be attained under the current process and there seems no oversight and a general lack of clarity as to whose responsibility these problems might be. What a strange thing our democracy is.

* I am requested, by someone in the room, to report on how the person introducing Mark offended a significant number of women present, something he realised he had done as soon as he’d opened his mouth. He welcomed us as Lords, Knights, Ladies and Gentlemen, thereby omitting the Ladies (as in Baronesses) and Dames. Nancy Rothwell, Mary Archer and I jointly accosted him afterwards and he was certainly apologetic. I can’t spill the beans as to who it was, because I never found out: he didn’t introduce himself which was surely another error of judgement amongst the motley gathered crowd of scientists, civil servants, and ‘leaders from industry’ and NGOs – as well as MPs.