Robert Macintosh recently wrote an article in the THE about how to chair a meeting. This is a topic that I have dealt with before on my blog in light-hearted vein – describing those chairs you really hope you never have to serve under, beautifully illustrated in cartoon form on the Upturned Microscope blog – but it is a topic I feel strongly about. And, in part, I disagree with what Macintosh writes. So, let me revisit the issue in a more serious vein than my earlier post. (Apologies, I know it’s meant to be the festive season but, despite what Jo Johnson and Lord Adonis may think, most of us academics have serious things to do even after the students depart). 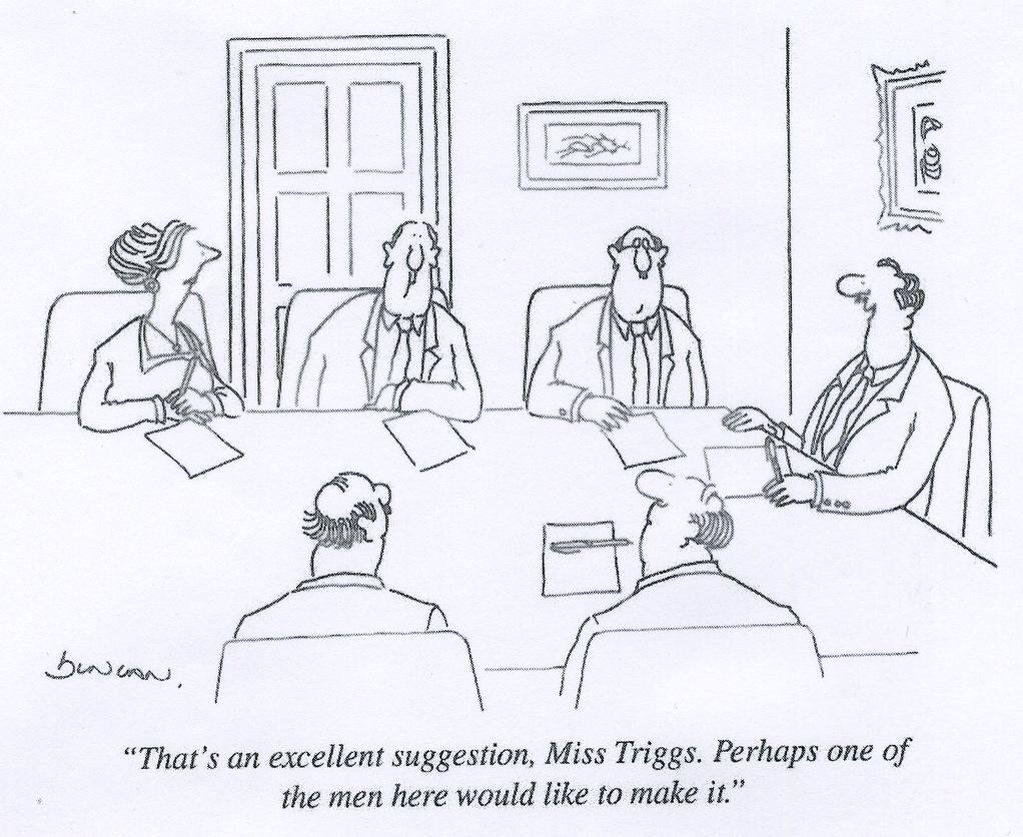 This Punch cartoon from 1988 is an excellent example of how not to run an inclusive committee meeting.

When I wrote my previous post, I really had grant-giving or promotions panels in mind, since those are the sorts of committees with which I had had most prior experience.  Since then the sorts of committees I’ve had responsibility for have diversified. It is clear that ‘judging’ panels have certain characteristics that don’t apply so much to, say, the sorts of local departmental committees I think the Macintosh piece refers to. Nevertheless, there will always be common strands. So let me counter Macintosh’s article with my own set of recommendations for the novice chair.

Most important I think is the issue about timing. Whether the meeting is scheduled for 1 hour or 8 (or even more than one day, as grant panels often are), knowing where you should be on the agenda at each stage is crucial if the business is to be completed effectively. That also means you can factor in ‘comfort breaks’ at convenient – and regular – intervals. A committee member whose legs are crossed will not be at their best. For those who need caffeine to stay awake, regular coffee breaks are often of assistance. Biscuits may also be constructive, bearing in mind the study that said people were less prone to unconscious bias if they were topped up with sugar. It may be bad for the teeth and waistline, but if good for minority interests and fair play I’m all in favour.

In advance of any meeting I’m chairing likely to take over a couple of hours, I ask the secretary to give an indication to me of approximate anticipated times on my briefing paper. In particular this can be vital if the chair of some subsidiary committee, or any other external member, is expected to turn up to some specific item on the agenda. It is rude to ask them to turn up at 1530, only to find you don’t get near their point on the agenda until 1645. But it happens, the more so without due planning.

Where I strongly disagree with Mackintosh is in his recommendation ‘sack the minute taker’. I think this is unwise. If the chair is to make notes throughout the meeting, they are less able to concentrate on making sure all voices are heard. The chair should be watching body language as well as listening to verbal language. If they are concentrating on scribbling they will miss many of the nuances, such as the slight twitch of body or eyebrows which indicates someone silent is wishing to make a contribution; or the clenched fist or jaw hinting at strong disagreement; or, perhaps most common, the tapping pencil highlighting impatience and boredom. Sometimes it is necessary not just to have a one line summary of the conclusions reached, but a careful record of who said what. Not all committees require that, but in many cases – particularly if the committee in question feeds in to another one, for instance helping a higher level one  understand the strength of feelings on some topic and how these vary from faculty to faculty – these sorts of details are required.

Even if that is not the case, a chair who writes the record of the meeting is much more likely to impose their own slant on to the wording in ways that may not reflect what actually happened, but be hard to correct by circulation after the event. Such a person may amount to the Benevolent Dictator Chair I described before, or could be someone much more Machiavellian. In any case they could be perceived as drafting the record in ways that did not do justice to the subtlety of the discussion.  So, I would say, give me a neutral secretary every time to take the minutes. In any case, this paradigm of efficiency and excellence is the person I expect to prepare me a briefing, remind me of previous decisions or papers, make sure we have dates for meetings going forward….all the crucial details that I am prone to forget.

Mackintosh uses the curious phrase ‘avoid room meat’ as one of his instructions. I have not heard committee members referred to in this way, but I know what he means. Members who turn up and never speak are a concern. Sometimes people are there because they represent a particular constituency, for instance the student body. As such, it is important their views are heard and a chair should be trying to draw them out to make certain this happens if at all possible. Sometimes nerves may overwhelm a person, particularly if they feel out of their depth or outclassed by the seniority of others. All the more important, then, to try to get them to speak in those situations, but if this still doesn’t work it may be sensible to talk to them outside the meeting so that you know if their silence means acquiescence, indifference or strongly-held views they don’t know how to express in front of others.

A chair may or may not have responsibility for selecting committee members. Often not, although they may have input into the sorts of people needed to cover the breadth of topics. Either as a new chair, taking over an existing committee, or when the entire committee is new, it is important for the chair to have some sense of the membership. It isn’t always possible to know in advance that two members loathe each other and will oppose each other come what may; or that one member is the ex-partner of another. But if you can get any sense of where people are coming from in advance that can be helpful, although not always possible. By the end of the first meeting or two it should be possible to tell where friction is lurking or who is going to attempt to dominate any conversation (and needs to be politely told to shut up). After that, in my experience chairing is likely to get easier once you are no longer operating in the dark.

Since the Macintosh article was clearly written to help those aspiring to fill the chair’s role at a later date, I will take that stance too. I believe the most important way of learning is by watching others. When first invited onto a committee, any committee, observe your colleagues. Observe the chair, what they do right and what they do wrong. Often it is the latter that is most important to pick up so as to avoid it in the future. My previous blogpost identified some ways in which chairs can get it wrong. Previously I have also written about the bad habits of committee members themselves, of which dominating the debate or waffling indefinitely are the two I consider most egregious for the well-being and success of the committee’s work. Finding ways to prevent such behaviour tactfully is never easy, but is a crucial skill for the chair to learn. I was touched to receive a Christmas card this year from a student member of a committee I chair saying how much they had learned from watching me. They could, of course, have meant about how not to do things, but I chose to take it as a compliment.

Chairing a committee is undoubtedly a skill that needs work; one never gets it entirely right. Anyhow, every committee has its own dynamic so that what works in one situation – light humour, for instance, or rigid time-keeping – may be disastrous in another. Macintosh’s advice seems directed towards efficiency, which is not necessarily the same as effectiveness.  I feel there are other skills required to get the most out of a given bunch of well-intentioned if inexperienced colleagues. This post should be read in tandem with his advice. And then, when that moment comes when first you adopt the Chair’s chair, you need to find what works for you with your own particular committee membership and brief. Good luck!

2 Responses to Taking the Chair