Is anger a good spur to getting on and getting by? The recommendation to use it as a positive force came from three eminent colleagues this past week. I had the enormous pleasure of facilitating (I think that’s the right word) a conversation with a trio of presidents of professional bodies who Katie Perry, Director of the Daphne Jackson Trust, had succeeded in lining up: Julia Goodfellow, President of the Royal Society of Biology, Carol Robinson; President of the Royal Society of Chemistry; and Julia Higgins, immediate past-President, by a mere two weeks, of the Institute of Physics. These three Presidents (all Dames) were left to my interrogating skills at the end of the Biennial Daphne Jackson Day. I would like to think a good time was had by all. (If you don’t know about the Daphne Jackson Trust, of which I am a Patron, do read about it. It exists to facilitate returners to science research and is going from strength to strength under Katie Perry’s leadership.) 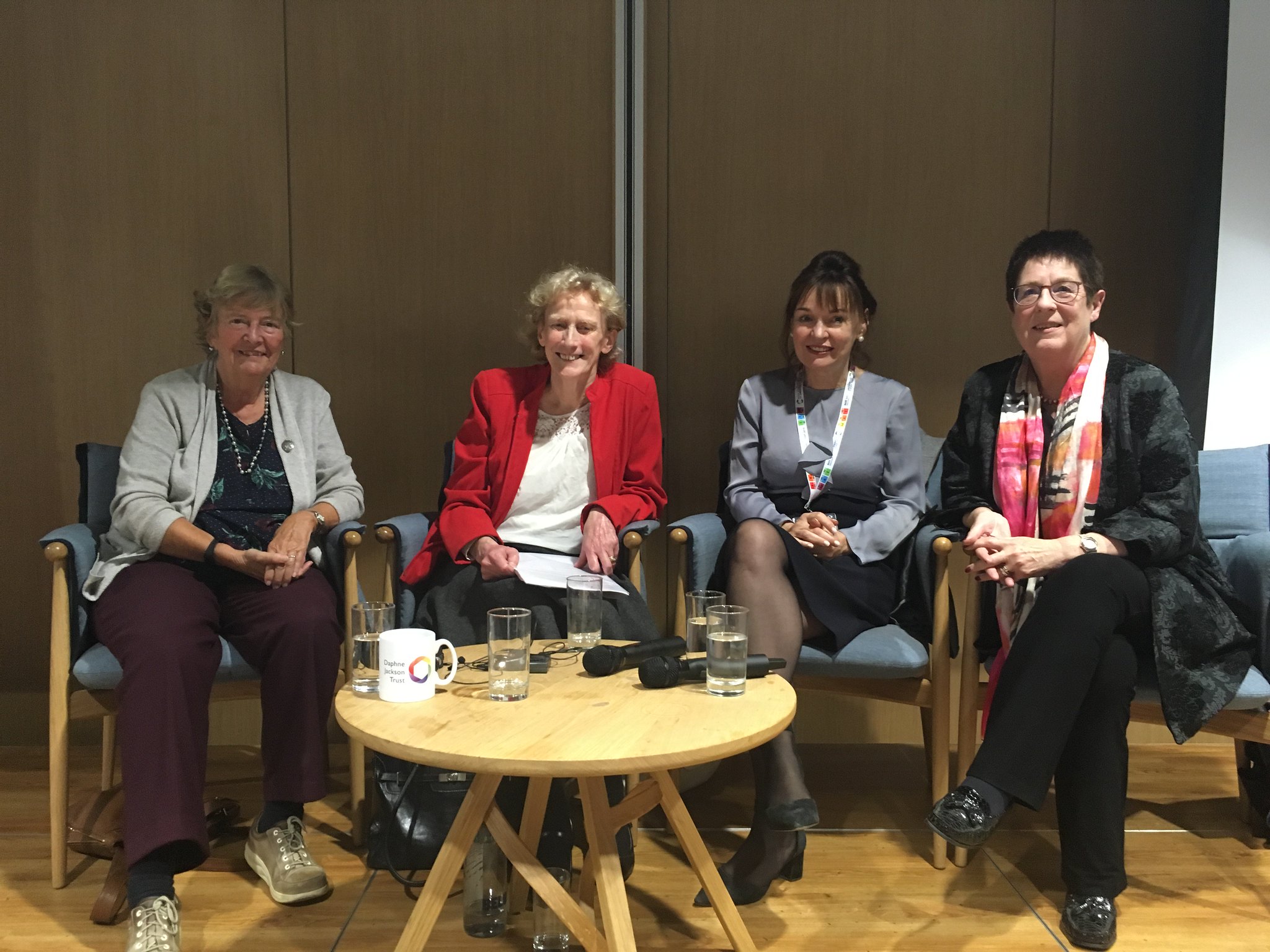 During the course of our hour-long conversation, anger – and wearing red – were both proposed as good ways to overcome a setback or rejection. Julia Goodfellow described donning her brightest red jacket when she’d just been thwarted or overruled, or perhaps had had a pet project stopped in its tracks. Julia Higgins recommended utilizing one’s anger to fuel determination: ‘I’ll show ‘em’ was the advice she gave to deal with being told she couldn’t do something. Literally shaking her fist as she said this, it is clear that – although I’ve heard her say she’s never been discriminated against – she does feel she has been stopped in her tracks from time to time. But then, as her career makes clear, Julia (H) has found the strength to fight back. I’ve known Julia a long time – she is after all in my own field of soft matter and was the closest person I ever had to a role model – but anger is not an emotion I’d associate with her. Which simply goes to show that anger is not an emotion that needs to be expressed by table-thumping or losing one’s temper. Just as revenge is a dish best served cold, so cold anger coupled with determination, can be a potent force for personal progress.

Carol’s advice in this context was directed at rejection – grant or manuscript more specifically. Don’t respond at once (that may also apply to someone trampling on one’s corns, of course), sleep on it and then work out the best way to come back. I would entirely agree. That first feeling of anger on reading referee 2’s comments is liable to be hot-headed and ill-considered. There is no point venting one’s anger immediately by suggesting that said referee is an ignorant idiot who hasn’t even read to the end of the paper. It may be true. It isn’t constructive. It isn’t likely to get the paper refereed more carefully or the editor to reconsider the rejection. Sleeping on it – possibly even for a couple of weeks (depending on timescale allowed; where grant funders require responses within days to a set of referees’ comments, a couple of weeks may be an unaffordable luxury) – is likely to lead to a reasoned response in turn more likely to produce the desired outcome.

There was much more to learn from listening to these women at the top of their game. The desirability of recognizing opportunities when they came along, and then seizing them was highlighted, a point of view I have frequently advocated myself.  This was, as Julia (H) explained, a better way of thinking about the role luck plays in life. Louis Pasteur famously said of his science that

‘In the fields of observation chance favours only the prepared mind.’

That adage applies equally well to life’s opportunities. If someone offers you a role and you aren’t prepared at least to consider it and so proceed to reject the opportunity without consideration, then the chance is lost, probably forever. If you don’t recognize the opportunity that is being proffered and simply see the challenge as outside your mindset and as, quite frankly, a bit scary, then the opening may never come your way again. Be prepared at least to pause, perhaps sleep on it (see advice above! – the same applies), before making the decision. Many years ago – before the advent of email when phoning for professional purposes was much commoner than it is now – I made an internal commitment never to make any significant decision during that first phone contact. It is extraordinarily rare that a decision in the professional scientific world can’t wait 24 hours. To ask for time to sleep on a job offer or the possibility of leading some significant piece of work is only reasonable.

When it came to a question of inspiration it was clear just how important teachers were to each of the three women. Admittedly Carol’s reasons were perhaps slightly less abstract and high-minded for taking her chemistry teacher seriously – he seems to have been a bit of a dish – but the other two seem quite simply to have fallen in love with science as a subject because of the way they were taught. Good teaching is crucial to almost everyone who goes on to succeed (I have paid homage to my own physics teacher in the past). We sadly lack sufficient numbers of inspiring, well-qualified science teachers in our schools and they are not evenly distributed. When the government talks, entirely reasonably, about widening participation it is a great shame they do not face up to the issues about poor teaching and the lack of qualified teachers (particularly in subjects such as physics, maths and computing) so many of our schools battle with.

One final comment about ‘seeing red’. As the photograph from the event shows, I was – as it happens – wearing a red jacket. Not because I was angry, but because over the years I seem to choose red regularly, something I have had occasion to note before. It is one way to stand out in a crowd, but usually I am trying to stand out from male colleagues not a trio of women. The other three were, on this occasion at least, primarily in more muted colours. I’m not sure too much should be read into this!

As far as I know the Daphne Jackson event was not recorded, which is a shame. I would have liked myself to consider in greater depth the range of answers these three impressive women gave to my questions. I did not have time to take notes! I hope the audience enjoyed the event as much as I did.