Working Together for Equity

This week I was honoured by the THE as the winner of their ‘Lifetime Achievement’ Award during their annual awards’ ceremony, for my work around gender equality issues. 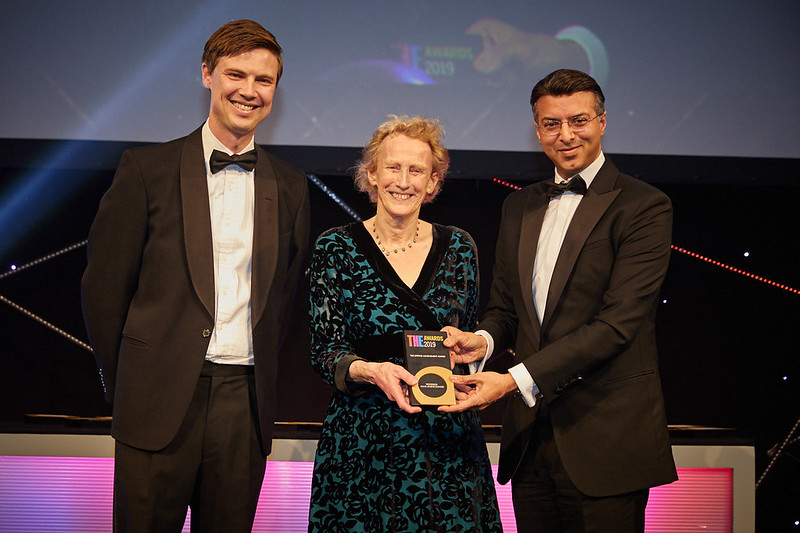 Photo courtesy of THE. With me are John Gill (L), their Editor and Atul Chauhan, President and Chancellor of Amity Education Group who sponsored the Prize.

I am obviously delighted to receive this award and not only at a personal level: it is a platform demonstrating the commitment of the THE to the importance of this work and a testament of recognition also to all the others around the world who have stepped up to try to improve the working environment for everyone. It is important to remember that well-known trope, what helps improve the situation for women will help everyone. Of course intersectionality issues make the challenges even harder, but if we could level the playing field for women it would be a step in the right direction, however many steps are still left to be taken.

It is perhaps not irrelevant that just a few days before, the THE ran an opinion piece by Irina Dumitrescu (a Junior Professor at the University of Bonn) about how being toxic can enable you to be ‘upwardly mobile’. It was ironic parody I hope, but like all the best parody it included far too many grains of truth for comfort.  Many women – and quite a few men – would say how a toxic atmosphere at work has driven them out of HE. Toxicity is central to what needs to be eradicated if everyone is to be able to progress in line with their talents, and not merely according to skin colour, chromosomes, accent, country of birth, academic genealogy, sporting prowess, societal background…..you can probably extend that list based on your own observations and experiences. Bias of many sorts, not to mention outright bullying and harassment, are all contributory factors in maintaining an unhealthy atmosphere in many dark corners of the educational landscape. Good policies are themselves insufficient to remove every dubious action. We need to move on from having a few champions – a word used to describe me in my citation – to an embedded culture in which everyone is prepared to challenge toxic behaviour whenever and wherever they spot it. I was pleased to use my ‘acceptance’ speech as a vehicle to remind the 1200 people in the room at the award ceremony, held at the Grosvenor House Hotel in London, of their own responsibilities in this space. What I said was roughly along the following lines:

I am deeply honoured by this award, although slightly shaken to be offered a Lifetime Award before I’ve even retired. I am sure I will continue to champion diversity issues, whether they are part of my job description or not. Although they are much talked about there is still such a very long way to go. In everything from harassment issues to bias, conscious or otherwise, in appointments, promotion and the handing out of awards or tasks, there is work to be done. This applies across the spectrum of minorities, although my focus has always been on gender.

One of the undoubted advantages of growing older is the feeling that speaking out is a less dangerous thing to do. I have very much enjoyed using my voice – through my blog, twitter (however evil you think that is) and elsewhere – to speak for those who can’t, and to push for change on many fronts. It is always encouraging to meet early career researchers who tell me how much they love my blog. I feel it gives it purpose. If it encourages others, then it’s brilliant. Let me remind those of you in the room who have voices – speak up.

Being a champion is all very well but it’s totally insufficient to overcome the systemic problems in our society and our institutions. I call on every one of you to join me in the fight against inequality and against assuming the status quo represents the best workplace for everyone. When it comes to bias and harassment each and every one of us can call out bad behaviour – if we don’t we are complicit. Think about that next time you observe something that makes you uncomfortable and act. Join me in championing a better workplace.

There were those who subsequently ‘called me out’ over Twitter for not being on strike. I am not a UCU member (and the local UCU branch have made it clear the dispute is not with Cambridge colleges). I would not consider a dinner such as this a part of my daily job, even if I were. There were no picket lines to cross.  Nevertheless, I appreciate that many of those who do stand on the picket lines in the cold and wet are motivated by the same desire to see equity, along with the removal of precarity and unfair treatment – not to mention the core concerns over pay and pensions, which as constituted may also perpetuate gender disadvantage. In that spirit I recognize that they are ‘doing their bit’ in this space. However, it saddens me that they felt a need to attack me because I choose to champion gender equality in ways different from their methods. (Readers with longer memories may even recall during the last UCU strike I took a very public stance as Master of Churchill College, publishing an open letter to UUK’s Alastair Jarvis.)

Everyone has their own strengths and weaknesses, their own attitude to what they best can do personally to improve our universities and different opportunities to act. We should not be pitching one form of ‘virtue’ against another, implying that one’s own approach is the only valuable or viable one, the only one that counts. If diversity and inclusion mean anything, it should be a recognition that there is strength in difference. So, whatever is open to you, in whatever sphere you move, I can only urge you to take that particular action to ensure that we don’t see cohort after cohort continue to be disadvantaged, let alone generation after generation.

It is good that the THE recognize and themselves champion the need to improve our universities to achieve genuine diversity. I hope their global readership takes heed.