Five years ago I received a package in the post, with a covering letter from someone I’d never met. Dan Davis, Professor of Immunology at the University of Manchester and apparently a fan of this blog, had sent me a copy of his book, The Compatibility Gene, ‘in case it would be of interest’. A former physicist himself, he had written – as I discovered when I read it a while later – a fascinating book about immunology accessible to a lay-reader with no prior exposure to that complex world. The current dire state of the world seems like an appropriate moment to reread the book, to derive as much benefit as I can about a discipline that is now so crucial and at the forefront of everyone’s minds. It is as good as I remember: accessible, informative and full of intriguing historical vignettes about how the field developed.

One key character in the field is Peter Medawar, a giant – literally and metaphorically – whose insatiable thirst for knowledge, coupled with endless energy even after suffering some near-death strokes, produced such significant advances in the burgeoning field during the post-war era. On my blogpost I’ve cited Medawar a few times, both in the context of creativity and as the opposite of an arrogant scientist, whose advice to young scientists still resonates today. He was clearly a remarkable man, although I will admit to being disappointed by his own reflections, Memoir of a Thinking Radish,which seemed to  have none of the panache of his other writing, but was laboured and less informative about his life and work than I’d have hoped. Medawar was clearly a hero to many people including, I would judge, to Dan Davis. 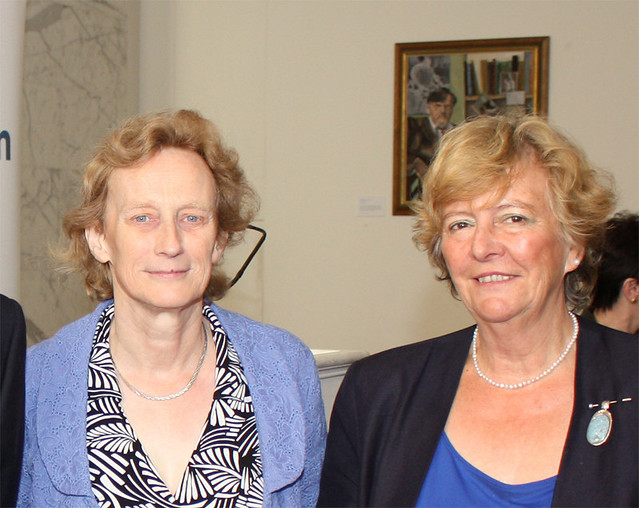 That set me thinking about role models, mentors and sponsors once more, spurred on by WISE’s campaign around encouraging more women and girls into the STEM subjects for 1 of the Million day ‘to recognise the role models – the mentors, cheerleaders and allies of any gender – who inspired you’ for November 4th. This, coupled with the news from the Institute of Physics last week that the polymer scientist Julia Higgins had been awarded the Sam Edwards Medal and Prize, prompts me to write. Julia – pictured above with me at a Royal Society event some years ago – was always the highly visible female polymer scientist a decade ahead of me, who was the nearest person I ever had to a (female) role model, and who was undoubtedly something of a mentor and sponsor to me throughout my career. (Sam Edwards was an even more key figure in my life, as I’ve written about before. This pairing of prize name and winner was particularly sweet to me.) I don’t think she and I ever quite felt comfortable about the role model aspect; she once said I’d shocked her by referring to her as such. I suspect the whole concept was much less well worked up 25+ years ago and it seems to have mattered less to us than to early career researchers of today.

However, mentoring is another matter. Julia was the person I turned to for advice – because of her extensive experience – when I was first asked to chair a research council funding committee. Her wise words I still remember: give everyone a chance to have their say, stop the discussion going round in endless circles, and bring things to a close with a clear summary of the ‘verdict’ before moving on. She was absolutely right. Cutting discussion off too soon leaves a feeling of being aggrieved. Letting it drift on – which, in my experience, is much the commoner sin – is just maddening for all not immediately concerned in the discussion. Additionally, Julia was a helpful ear when I wasn’t sure where my career was going, once I had been deemed not suitable to be head of department by my peers.

Julia has had a long and distinguished career as a neutron scatterer of polymers, moving into the field just as beamlines were becoming accessible for such experiments. (Sam, although a theoretician himself, was – if I recall one of his many dinner conversations accurately – significantly responsible for obtaining approval to build ISIS, the UK’s neutron source, during his time as Chair of the Science Research Council from 1973 to 1977. Sam and Julia were something of a mutual admiration society.) She made seminal contributions in understanding polymer structure, thermodynamics and motion in solution.

She has also been a great champion of women in science and this is another arena in which I owe her quite a lot. At least I think I owe her. At the time I was far from sure when, as the Athena Forum came into being in 2007 once the original Athena Project came to an end, and the Athena Swan charter moved elsewhere (and she had been very instrumental in setting Athena Swan going in the first place), she and Jocelyn Bell Burnell fingered me to take over from Jocelyn as Chair after she had served for a year to get it going. At this point I had barely entered the field of gender as a policy issue, although I had been active in Cambridge (through WiSETI for a couple of years). I felt very ignorant about what had been done nationally, and what could and should be done in the future. There is nothing like getting stuck into something to learn about it. Learning on the job is scary but no bad way to get immersed in a subject fast!

A little later it was again Julia who set me up – by passing on her own invitation to me – to present my first formal, international academic talk about gender matters in Austria, a talk I wrote about very early in my blogging days. This was a nerve-racking experience too; I felt such a novice in the face of eminent speakers like Stanford’s Londa Schiebinger  and Evelyn Fox Keller. But the only way to learn is to give things a go. Do not believe anyone springs fully armed (like my namesake, the Greek goddess) ready to do battle. Like every other novice, the first time was the hardest for me and thereafter it has got easier with practice.

Julia threw me in the deep end, an end she no doubt had survived herself at the outset of her own championing of gender issues. She gave me advice and opportunities and was always encouraging. I noted two of my slightly younger (male) polymer colleagues remarked over Twitter just how encouraging she had been to them in their earlier careers when this most recent prize was announced. She may have been awarded the Sam Edwards Prize for her polymer physics skills, but for many of us, she shone in far broader ways than just her science. So, for WISE’s 1 of the Million Day, I nominate Dame Julia Higgins, DBE FRS FREng.

1 Response to Mentors and Role Models