Getting Behind Diversity Statistics

Earlier this year UKRI published ‘harmonised’ diversity data across all its councils. These did not make for comfortable reading, with attention being particularly focussed on two findings:

Now EPSRC has presented its own disaggregated data for gender (but not ethnicity), reinforcing the message that women are awarded smaller grants than men and apply in lower numbers than their proportion in the academic workforce would indicate. Furthermore success rates diverge as the value of the grant applied for increases. For the largest grants – greater than £10M – there have only ever been two awarded to women over the period from 2007-8 to 2018-19, a pretty shocking statistic.

The trouble with statistics, however, is that they don’t tell you what the underlying causes are, and these gender differences could arise from many different causes, not all of which – indeed potentially none of which – can be laid at EPSRC’s door.

Deeply troubling data. But with large grants would be interesting to know if internal university sifts for large grants favour a male PI over a female. Where does the problem originate? Systemically in institutions or with ‘timid’ women not applying? #WomenInScience https://t.co/FJQ86s9Z9I

in which the inverted commas sign around ‘timid’ was too subtle for some readers. It is of course that there will be some academics who indeed do believe the alleged unwillingness of women to take risks – an interpretation neatly skewered by Cordelia Fine in her book Testosterone Rex ­– lies at the heart of women not successfully receiving these mega-buck grants, but I think we have to look further and harder for potential explanations. And then try to work out how to design analyses that may tease out which are the key factors.

During the time I was the University of Cambridge’s Gender Equality Champion (2010-14) we were faced with a similar conundrum. We found that women were more successful than men in receiving promotion and wanted to know why, but they applied at lower rates and typically there were longer gaps between successive promotions. I proposed the following possible causes:

We tossed these ideas around, but the data we had could not possibly confirm or refute any of those ideas. The one thing we did know was that historically women had seemed to be less certain about processes and presentations by the relevant PVC helped to demystify processes, something particularly important if – again – women were lacking informal mentors who would help them through what might have seemed like the maze of applying. The University could, and did, address through appropriate presentations to clear the fog.

So, with the current EPSRC data, it is possible to come up with a whole range of explanations, of which blatant bias at panel meetings is probably the least likely. I am sorry to say that I suspect some of the discrepancies may lie more squarely in the domain of the applicants’ universities than at the research council.

Let me start by considering the miserably low number of women who have successfully been awarded ultra-large grants. As some of my Twitter feed pointed out, grants this large are typically for doctoral training accounts or some sort of infrastructure award. In some cases, these huge grant applications may need to be submitted under the name of the Research PVC ex officio. I do not know the proportion of women who hold such roles. I do know that the present EPSRC CEO, Lynn Gladden, was my university’s PVC-R for six years. I understand Rachel McKendry (UCL) is the only woman to lead a doctoral training centre*, but it is perfectly possible that Lynn is the other woman in the select group of two holding such big awards; I have no idea.

However, for grants of between £1.5M and £10M the proportion of women applying is only just over 11% compared with a benchmark percentage of ~17% in the EPSRC academic population. The figure below shows that, whereas for women, success rates are fairly constant independent of grant size, this is not the case for men; for them, the larger the grant the more likely they are to succeed. This seems very curious. What follows is highly speculative, but I hope someone will do some proper analysis. 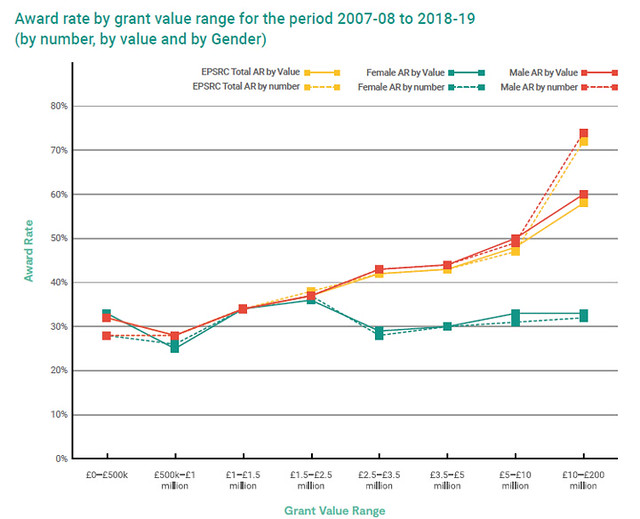 Firstly, for many of the larger grants – probably occurring under specific calls – there is likely to be a university-level sift. If women attempt to lead such applications, is it the university that is favouring a male-led bid in preference to the woman? Based on my experience in university politics, I can see only too easily how the man may look more forceful and command more favour than the woman, regardless of intrinsic merit of either the specific application or the particular woman who wants to lead it. Bias may well creep in at this point, unconscious though it may be. (I have always worried about pre-sifts for fellowship competitions and the like, because I have yet to hear of a process that properly takes into account different factors including diversity, rather than a gut feeling about who is ‘best’. Some universities may have this cracked, and if so, it would be good to hear about it.)

Secondly, as another person postulated over Twitter, the women may anyhow have found themselves stuck on so many committees to give gender balance; or have so much pastoral care dumped on them because ‘they’d be so good at it’, that perennial guilt-inducing argument; or indeed they may be juggling home-schooling during a pandemic, or whatever equivalently happened before this interminable wilderness of strangeness. Women, in other words, may have too many other demands put upon them to allow them to devote the huge amount of time required to put together a large grant. If they are not perceived as the stand-out academic in their department, little leeway may be given to them.

Finally, they may actually prefer not to go for the large grants, not because they are ‘timid’ but because they think smaller enterprises are better for those within them. Ottoline Leyser – UKRI’s Director has, certainly in my hearing, spoken up for the ‘small is good’ model of research groups. Women may be opting out, in some cases, of applying for the largest grants because they would prefer to stay close to their research team.

So why do men do so well when applying for large grants compared with women. I have so far put the blame on universities to a large extent for the relative paucity of women applying for large grants, but I do wonder about the data in that figure. I find it deeply worrying. When women do put their hand up with a large grant application, what is it that makes them less likely to succeed? It could still be that universities don’t offer the same support to a woman putting the application together. Or it could be that the grant panels subconsciously really do see men as being ‘better’ at running a big show. Or that all the legwork was done behind the scenes before the grant was submitted anyhow. I’m not sure – other than by having trained social science observers attending decision-making panels to see what is going on – how to examine the possibility of bias entering into decisions, and the small numbers may mean statistics defeat an analysis anyhow.

As a final remark, I’d like to highlight one of the steps the EPSRC are apparently congratulating themselves on, namely that they have increased the number of women on panels and as panel chairs. It sounds good but having 30% of women on panels plus 31% acting as panel chairs when they are only at 17% in the pool of researchers, means women are expected to give up – on average – twice as much time as men to this community service. There is no doubt that sitting on panels is wonderful experience (although I sometimes used to think I learned more about what a bad grant looked like, rather than a good one, which only used to throw me into paralysis when writing my own).

It is great that more women are being given the opportunity to see how the system works. But, simultaneously, they are also being asked to give up time to this service when they could have been writing their own grants. If the evidence supported the view that having more women on panels led to fairer decisions the case would be stronger. But all the evidence I saw during my time at the ERC** showed, across the board of all disciplines, a larger proportion of women on a panel tended to lead to women being more disadvantaged rather than less. I fear that sticking more women on panels may smack more of doing something that looks like a quick fix rather than resolving the issues the current data is showing up.

So, great the Research Councils are doing this analysis. Not so good that the numbers aren’t encouraging and the reasons for this are still obscure.

*Correction: In fact Rachel led an IRC not a DTC, but the fact that she is one of only 2 women to hold such large grants remains the case.

** I have now been able to establish where this data is, with some help from Claudia Jesus-Rydin from within the ERC who pointed it out. Isabelle Vernos, then Chair of the Gender Balance Working Group, published an article in Nature including this.

This entry was posted in Equality, Science Funding, Women in Science and tagged EPSRC, grant-funding, Unconscious bias. Bookmark the permalink.

2 Responses to Getting Behind Diversity Statistics