In which I snap 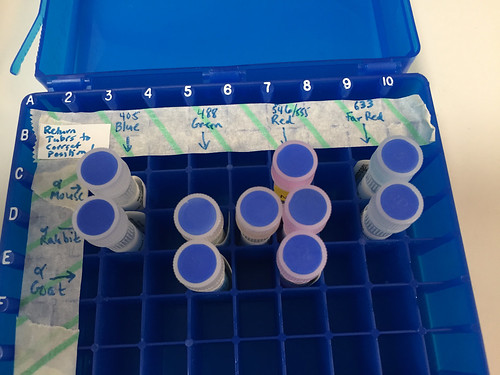 I’m not a neat freak or anything, at home or in the lab, but sometimes, enough is enough. Behold the new arrangement of our lab’s stash of fluorochrome-conjugated secondary antibodies. Is it not a thing of beauty?

(A moment of silence to admire said new arrangement.)

It goes without saying that if I catch anyone filing them back in the wrong slot, they’re toast.

I’ve spent far too many hours of my life digging through box after box of identical-looking tubes: pulling them out, squinting at the unintelligible labels, putting them back, checking out the next one. Repeat ten million times. I’ve been in labs where the tubes were all labelled in Chinese; or were missing the concentration; or whose pen marks had long since rubbed off altogether, but people in the know recognized what they were by distinctive nicks in the lid or smudge marks on the side. I’ve contracted frostbite going through hundreds of snow-covered boxes in the back of the -80 freezer, untouched by human hands since the early Pleistocene.

It’s getting pretty bad in our communal cold spaces. I think this is a predictable outcome when a lab starts out very small (one person doing experiments, who knows where everything is because it’s all his) and expands organically.

After my last experimental foray, when it took me two hours to find the red phalloidin, I am almost, but not quite, thinking about a bar coding system. Can someone please shoot me?

3 Responses to In which I snap