Flags of our Daughters

Flags are potent and emotive symbols for many people but when my daughter plonked her new school-bag on the kitchen counter at the beginning of this week I cracked a wry smile. My reaction to the garish decoration of her bag made me realise what a long way I had travelled from my own childhood, a journey that has been at least partly influenced by science.

The details are a bit fuzzy but one summer when I was about five or six years of age, the colours and curious geometric arrangements of little Union Jacks on sale in my local sweet-shop must have caught my eye because I sacrificed my sweet money to buy one — no more than a bit of plastic glued to a stick — and taped it to the handlebars of my bike. But when my father came home from work and saw me doing laps of the yard, there was no wry smile.

“Where did you get that?”

I was immediately banned from parading my purchase in the street.

It’s not that my father was angry. Rather, he was concerned for my safety because, as a Catholic growing up Northern Ireland in the Trouble-wracked sixties and seventies, the decoration of my bike was likely to attract dangerous interest from both sides of that divided community. Other Catholics (our republican friends, so to speak) would wonder what the hell I was doing, whereas Protestants (unionists – God Save the Queen and all that) would have unmasked me with a couple of questions (“What’s your name?”, “What school do you go to?”) and soon divined that my affinity for the flag was not nearly as thick as blood.

As I got older I learned there was more to a flag than the pretty patterns. Though it was by no means universal, many of the streets and housing estates in Northern Ireland were branded with Union Jacks or Irish tricolours, to signal the affiliation of the local residents. One lot would tolerate you, the other was ‘the enemy’. So despite my initial infatuation with the red, white and blue, the British flag became an intimidating stranger.

My aversion to the Union Jack wasn’t sufficient to prevent me heading to university in London to study physics. This was a big change of scene for a lad from Ballymena. London was a lot to cope with but I revelled in the refreshing new mix of people, none of whom seemed too preoccupied with religious or community affiliation. But there were still odd effects of my upbringing. Every so often I would trip over my Northern Irish roots.

I settled in England, having met my wife at university. Admirable assimilation you might think, but although she is English — her Essex origins had not escaped me during our courting — when she was expecting our first child I started to fret about what it would be like to have a son who spoke with an English accent. Estuary English, to be precise. I was worried that his linking R’s and dropped H’s might be a barrier between us*.

Of course, in the event nothing could have been further from the truth. My son speaks the way he speaks and that is part of who he is. It’s the same with my two daughters. But it took the experience to teach me the lesson. Nowdays we just laugh about our different accents. By which I mean, they laugh at mine.

The move to England was good for my education in diversity, but the lesson was solidly reinforced by forging a career in science. Life in a modern lab is fantastically enriched by international contacts. As a postdoc I was lucky to do stints in France and the USA (our second child is American, but didn’t stay long enough to pick up a Boston accent). And a whole string of foreign students and postdocs have passed through my lab at Imperial, from as far afield as Argentina, Russia, Israel, Greece, Hungary, France, Ireland, Indonesia, and China.

These observations will be familiar to most people who work in science. The internationalism of the profession may even have come to seem ordinary, but our daily immersion in the world-wide ebb and flow of people is an extraordinary pleasure and privilege. And of course it is hugely beneficial to our shared scientific enterprise.

But international engagement is not such a commonplace for everyone. When my daughter’s bag landed on the worktop, the bright array of red, white and blue also brought to mind the British National Party (BNP), who have blended the union flag into their logo, smearing it with their stunted, whites-only mindset and making it for many a symbol to be feared. There has been a bit of a to-do recently (as we say in England) about the BBC’s plan to allow BNP members to appear on Question Time, a long-running TV show where the studio audience gets to quiz politicians of the day. In my opinion the BNP are an excremental bunch of little Englanders, who espouse loathsomely violent methods of immigration control, but I think the BBC would be right to put them on the show. The exposure to the diversity of the British public might just do them some good (or, at least, some electoral harm). There’s nothing like mixing it with strangers to teach you something new about the world. 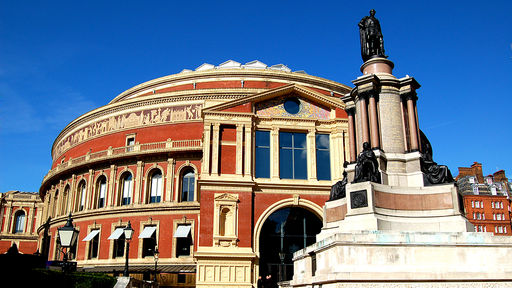 Pomp, in the right circumstances (from the BBC)

However, that battle can wait for another day. This evening on BBC-TV there are no politicians because the Last Night of the Proms is being broadcast, the last of a series of summer concerts (held in the Royal Albert Hall) that is famed for the standing-room-only promenade in front of the orchestra. As is traditional, at the end of tonight’s concert there will be Elgar’s rousing Pomp and Circumstance and there will be much joyous waving of the Union Jack. I’m quite partial to a bit of Elgar and, even if I still can’t connect with the flag-waving, I’m completely relaxed about others enjoying it.

I’ve got my roots, you know, but I’m branching out.

*I realised my son’s accented fate was sealed one Friday morning when he was about three years old. We were living in Essex and he was starting to learn the days of the week.
“What day is it today,” I asked.
“Um, Monday?”
“No. I’ll give you a clue – tomorrow’s Saturday. So what is it today?”
“Um, Wednesday?”
“No, that was two days ago. Tomorrow is Saturday,” I prompted, “so today is Fffff… Fffff…”
His eyes lit up with the delight of recognition.
“Fursday!”

This entry was posted in Science & Politics, Scientific Life. Bookmark the permalink.

126 Responses to Flags of our Daughters