I’ve reached that age where my eye is drawn to the obituary column every time I open the newspaper. It hasn’t been a conscious move but, having arrived at my fiftieth year, I am increasingly aware of the hopes of youth shedding and floating away, like leaves from a tree, and find myself more often looking back over the road now travelled than peering into the future at the way ahead. I have a vague sense that there has to be an accommodation — some kind of reckoning — but I’m not sure how to achieve that. I’ve not been this way before, and I suppose that might explain my interest in the report cards of those who have. Youth is such a beguiling fantasy, provided of course you are lucky enough to be born into the relative comfort and safety of a developed existence and a supportive family. As you grow up and learn more of the possibilities that life has to offer, a world of potential fulfilment unfurls before you: places to visit, people to meet, books to read, ideas to wrestle with, disciplines to master, the chance to become someone, to make something of yourself.

I have travelled that road and worked hard along the way. School, university and a PhD, followed by stints in labs in France, England and America that took me to my early thirties. From there I gained a foothold as a junior lecturer at a university where, a dozen years later I became a professor of structural biology, a position I hold today. I have published over eighty scientific papers, and lectured to my peers on three continents. I would appear to have attained my academic acme; to outsiders it must seem like the completion of a magnificent destiny.

The only trouble is, it is nothing of the sort. I have little sense of being the finished article. What I am and what I know is incomplete.

To some it may seem odd for a fully-fledged professor to make such an admission but there it is. I am not insensible of my scientific achievements, such as they are, but when I look at the whole, it is the holes that stand out. I was probably not helped by having relocated to biochemistry early in my research career after first training in physics; a certain inter-disciplinarity is no bad thing but the move has also left me feeling not quite at home in either field. I suspect in any case the sense of mastery would not have been much improved by sticking to one area of research; most scientists enclose only small plots of expertise and are wary of straying outside.

As a consequence, impostor syndrome looms large and brings with it moments of disabling dejection. Most days it’s OK. It helps that the phenomenon has a name and is widely shared. That knowledge, and the experience that comes with over a quarter of a century of scientific work and learning — failure punctuated by enough triumphs to keep the show on the road — go some way to providing the resilience to live with the never-ending feeling of never ending.

This should come as no great surprise since we cannot perceive the world except incompletely, though we may sometimes be taken in by the astonishing rate of scientific progress. As a scientist myself, I might be equipped with one of the most powerful modes of inquiry developed by humankind but am nevertheless all too aware of its limitations. Consider as an example the work involved in X-ray crystallography, the main technique that I use in my research to reveal the structure of protein molecules at a level of detail that is normally hidden from sight. It is the work of weeks or months or sometimes years to conjure crystals from our samples so that we might illuminate their innards with X-rays. The crystal splits the beam into myriad rays that are captured and recombined in the sophisticated, knowing embrace of mathematics to reveal the protein structure within. These long projects ultimately yield an object of dazzling complexity, a rich, three-dimensional representation of a molecule on a minuscule scale. Such power: we see essentially every part. The atomic construction is revealed and that enables us to understand the chemistry of its function.

And yet, seeing everything is not the whole story — one eventually learns not be taken in by the flush of excitement that accompanies a new result. The view remains partial, illusory, problematic in so many ways.

In spite of the power of the technique, we cannot see all of the structure. The image is an average of information summed over the billions of molecules in the crystal so that parts that are moving or that differ slightly in conformation between individual molecules remain blurred and invisible, like hands waving in a dimly-lit photograph.

Moreover, the method only reveals a single structure, the particular conformation locked into place by the inter-molecular forces that hold the crystal together. This captured state, an experimental convenience, is just one that the protein might adopt as its polypeptide chain flexes and writhes in its natural state in a living organism.

And that is not all. Crystallography may be powerful but it is also an exacting technique. Typically, only samples that are extremely pure are likely to yield crystals suitable for X-ray diffraction experiments, which means that you can often only examine one molecule or fragment at a time (though occasionally you might be able to crystallise two or three that cluster together naturally to see how they interact). The purifying isolation that is the secret of success in crystallography is therefore also one of its severest shortcomings, since it is rare to be able to examine all the interactions that proteins make while playing their part in the cellular dance of life. There is a kind of uncertainty principle in operation, above and beyond the quantum scale puzzled over by Heisenberg: the harder you try to pin something down for examination, the more the world in which it operates is expelled from the experiment.

And so, though replete with information, we are forced to realise that the big picture is mostly empty. We might have coloured in one isolated patch with our analysis but spent so long working out the shading, focusing on each atom as the glorious structure was gradually revealed, that only when we step back do we realise that the molecule that had loomed so large in our mind’s eye is but a speck on a gigantic canvas of white. Disappointment hacks into the sense of achievement. Sometimes the easiest escape is to move on, to distract yourself with the next experiment, the next structure.

Of course sometimes a story emerges, piece by piece, which is more satisfying; one experiment leads to a new insight, to another experiment or line of inquiry that connects parts of the world and makes sense of it in ways that could not be seen before.

But there are only so many stories, or in my case, molecules, than can be worked on in a lifetime. Like most scientists, I don’t have a grand achievement I can call my own, though I have had smaller moments of satisfaction. I think of work in the 1990’s that uncovered a role for the arcanely named 135S particle in the pathway of poliovirus infection; of a decade of experiments to probe how the serum albumin in our blood plays catch and release to shepherd all manner of molecules, from drugs to fats, around the body; or of our ongoing examination of the protease from foot-and-mouth disease virus that cuts and shapes viral proteins in each round of infection, and might yet be exploited in the fight against this alarming pathogen. Following the threads of these investigations from one clue to the next has certainly been gratifying but I have never had that sense of reaching a conclusion. Some of these stories have ended for me but only because I moved labs or ran out of funds or arrived at a question that was beyond the reach of current techniques, not because the investigation was complete.

The scientist’s lot is partial, incomplete. The answer is never the end and the puzzle at hand has to be enough. There is consolation in the notion that our published work confers some level of recognition and even perhaps a deceptive hint of immortality. My papers are doing reasonable business at the moment — people are reading and citing them — but most (all?) will eventually fade as the tides of time wash in new observations and ideas to divert attention elsewhere. Who knows when the stories that I joined for a time will be finished? 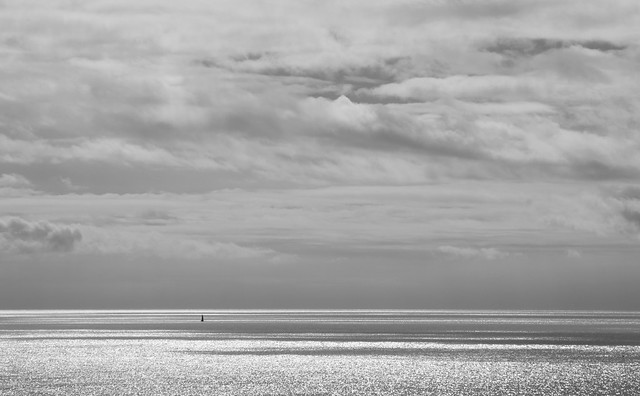 Of course, none of this is exclusive to my particular branch of science or even to scientists. A sense of incompleteness surely affects us all, to greater or lesser extents, though the noisy colour of life blinds us for much of the time to the empty spaces in our comprehension of this world.

How can we truly know where we are when our knowledge of the world is so incomplete? And what we are supposed to make of our lives? In the midst of so many unknowns, it is easy to lose your bearings; or rather, it can be difficult to find them in the first place. These are obvious problems of course — they are the very stuff of philosophy and religion and have been tackled by many finer minds throughout human history. I think of Socrates (’The unexamined life is not worth living.’), of Montaigne (‘Rejoice in the things that are present; all else is beyond thee.’), of Camus (‘One must imagine Sisyphys happy.’) and even of Pirsig’s musings on motorcycle maintenance. My own meandering reflections here were prompted by a review of Oppenheimer’s biography, which suggested that, for all his extraordinary learning and accomplishments, he ‘never figured himself out’. Has anyone?

Questions of meaning and purpose are obscured early in life by the certainties and norms passed on to us by parents and teachers and other cultural authorities. Through our early years we are immersed in ‘the ways of the world’ and will accept them until we learn to think for ourselves. Even then, the problem of incompleteness can easily be deferred by the optimism (or is it the arrogance?) of youth, which imagines itself to be only starting out on the learning curve of life and to have all the time in the world.

But I now know that I won’t meet all the people, read all the books or discover all the ways of thinking that I thought I would get around to in the span of a normal life. (That word ’normal’ — such a charlatan.) And I sense that even close examination will not succeed in all its hopes, for no experiment tells the whole story, however hard you try. How, therefore, to live in a world that we understand but little? Through force of habit and in the companionship of family and friends, I do well enough most days but then I open the paper and another obituary calls me to account.

This entry was posted in Scientific Life and tagged Age, philosophy, rambling. Bookmark the permalink.