Review: Heart of the Original

Steve Aylett’s short book on originality, creativity and individuality may conform externally to the rectilinear format of most other books but is otherwise highly elliptical. I found it maddening. 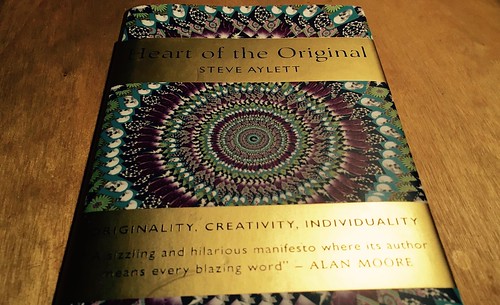 Heart of the Original – Alan Moore loved it.

It has chapters, paragraphs, and sentences – just like other books – but somehow those sentences don’t stack up into a shape that is easy to get hold of. I can’t even put my finger on it. Aylett’s commitment to originality seems total and sincere – he writes with the surety of conviction. Heart of the Original contains plenty of insightful gleams and canny turns of phrase, but they were overlaid with too much opacity for my liking. It is unfair to quote mine but I want you to share in my frustration. Try this for size (from page 87):

“It’s a cliché that with our future ahead of us and our past behind, a manoeuvre to the sides, above or below might expose epic sweeps of terrain to explore, each sideline having different properties and climates. There is one which is made entirely of interwoven targets, one which is a giddy chaos of pop-rocks, one in which everything in one direction is a euphemism for everything in the other, one which is all soppiness and jumper cables, one which is sacred and unbearable, one across which visitors are ricocheted a universe-depth twice per standard second, another where the coincidences are piling up, and yet another which is all and everywhere solid unliveable gemstone without even light to clarify the explanation which stripes it as through a stick of holiday rock.”

I know all the words but I could not uncoil the author’s meaning in these sentences. I kept hoping to arrive at a conclusion but never did. Perhaps that’s the wrong quest – Aylett seems more interested in attitude than instruction. Overall I did get a dim sense of his intention: that true originality is difficult and rare, and often unwelcome in a world dulled and comforted by familiarity; and that this in turn propagates a loss of nerve in many pretend creators. Aylett has a point and often delivers it with some wit. To redress he balance of the excerpt above, try this one (page 120):

“Biological death – the only kind worth bothering with – is met with fighting stances among those who want to dodge it, an urge rarely motivated by a desire for wisdom. […] It’s claimed that advances in science mean the first human to live to 500 years has already been born – if so, he or she was born into wealth and will hopefully use the extended lifespan to mature beyond being a privileged dick. Doris Lessing remarked that human beings do not live long enough to come to their senses.”

But such moments were not enough to gratify this reader. I wanted to like Heart of the Original because it was recommended in the course of a thoroughly entertaining discussion on the BookShambles podcast by Stewart Lee and Robin Ince, both comedians whose work I have greatly enjoyed. Maybe I recognised myself too often in Aylett’s sideswipes at the unimaginative and I’m just a sore loser?

I was certainly discombobulated by Aylett’s book but at least have the presence of mind to know that’s not necessarily a bad thing. So why don’t you try it for yourself, and then write in to tell me how wrong and unoriginal I am?

P.S. The weekly Bookshambles podcast, in which Robin Ince and Josie Long chat to an invited guest (mostly) about their shared love of books, is great fun. This past season I particularly enjoyed the episodes with Sara Pascoe and Natalie Haynes.