The March for Science: advocacy masterstroke or PR misfire?

Last night made my way to an upstairs room at The Castle pub near Farringdon to participate in a debate organised by Stempra on the forthcoming March for Science. 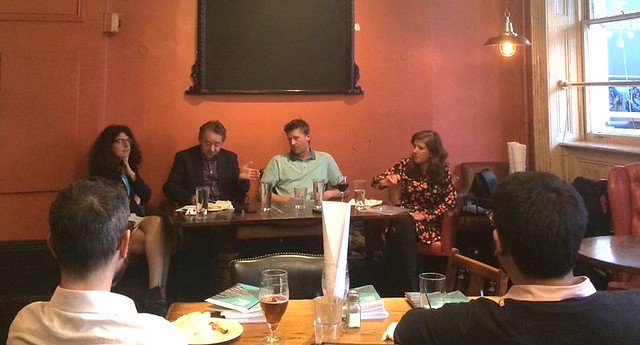 The panel (Photo by Anastasia Stefanidou)

The question before the panel and the assembled audience was whether the call to arms, first issued by scientists in the USA but now heard and answered across the globe, is an “advocacy masterstroke or PR misfire”. In truth, there was not much actual debate, though there was plenty of discussion. The panel, consisting of myself, Fiona Fox (director of the Science Media Centre), and environmental science writer and campaigner Mark Lynas, broadly agreed that the march is a good thing, albeit for different reasons and with different qualifications – and we’ll all be marching in London on Saturday. Here below, for what they are worth, are the opening remarks that I prepared.

For other interesting takes on the March for Science, I can recommend this article by Michael Halpern and Ed Yong’s interview with Hahrie Han, a social scientist who studies activism.

“When I first heard about the March for Science in London I was extremely lukewarm about the whole idea.

I could see the point of Americans marching for science, given the threats posed by the Trump administration – both to evidence-based policy on issues like climate change and vaccination, and to the science budget.

Those threats are hard to judge given the wayward nature of Trump’s administration. He has shown himself to be ham-fistedly ineffectual, both on his travel ban from countries with large Muslim populations, and the attempt to overturn Obamacare. Even so, if I were working in the USA right now, I would not have hesitated to sign up in support because there are specific policies to protest.

But I did wonder about the spill-over of the protest to the UK and the rest of the world. I could see why the March for Women, initiated in the US also in reaction to Trump, had rapidly spread to the rest of the world – because the issues of women’s rights and gender equality are ones that are very much alive – in many forms – across the globe.

But although I am a scientist – and therefore very pro-science! – I didn’t immediately see the point of the march for science in the UK. (I can’t speak for the rest of the world).

It’s not that I’m one of those researchers whose focus is entirely on my research. I’ve campaigned before for science. I was one of the founder members of Science is Vital and helped organise our rally to protest against the threat of cuts to the science budget back in 2010 – and on several other occasions since then.

We’re a very small and entirely amateur organisation (though hopefully not too amateurish!), so we are mindful to concentrate our efforts. And to do that we rather deliberately concentrate our messaging, which has almost always been about making the case for public investment in R&D. And to that end, we have tried to tailor our campaigns so that they are heard by politicians and I think we’ve had some success in doing that.

But what is the point of the march for science? The political point, I mean? What are the aims? As stated on the web-site, these are:

“The March for Science celebrates publicly funded and publicly communicated science as a pillar of human freedom and prosperity. We unite as a diverse, nonpartisan group to support science that upholds the common good, and political leaders and policymakers who enact evidence-based policies in the public interest.”

Well, who could be against that? The organisers’ statement is at once the march’s greatest strength and greatest weakness.

It’s broad enough and vague enough to accommodate all-comers. Hopefully (and I am mostly a hopeful person), it is roomy enough to find place for the diversity of voices within the scientific community and those who feel peripheral to it or even excluded (though that could well be wishful thinking on my part). I know there has been lots of discussion about failings on diversity and inclusion by the US organisers but, the UK organisers appear to me to have done a better job. There seems to me to be a decent mix of speakers for the London march and I hope that from them – and from the placards brought by marchers – a diversity of voices and viewpoints will be heard. We’ll see…

But by being so broad and so vague, the organisers avoid asking some of the hard questions that come up when the gears of science and politics mesh (or crash, depending on who’s driving). On their web-site the organisers have mentioned to the concerns about the emergence of “post-truth” or “post-fact” types of public discourse in the EU referendum and in Trump’s election campaign. That’s certainly worth protesting, but the follow-up questions are hard.

For example, should we regulate the media more forcibly than we do to ensure that they are factual? Or does that play into the hands of those who are all too ready to cry “fake news”? Should we insist that scientists volunteer to do more spots on the Today programme? How far should scientists stray into the political domain, and how far outside their field of expertise should they be allowed to speak? Does speaking out compromise their scientific integrity? It certainly opens them to attack – as any climate scientist will tell you.

I think all of these questions have answers (and I hope we’ll get to some of them in the discussion). The answers aren’t easy and they involve issues that we probably need to keep constantly under review.

I don’t think these questions will be addressed in the march on Saturday. Marching is a rather blunt instrument for democratic discourse.

And these aren’t even all the questions that we need to be asking about science. I think there’s another debate to be had about how much the public should be enabled to influence the science that they fund. That was one of the disconnects that emerged most strongly in my mind in the painful aftermath of the EU referendum. To me, inequality is the single most important issue facing Britain today – in education, in employment, in healthcare – and it is one that is not being touched by all the hullaballoo over Brexit. And yet it once was. It was one of the issues that seeded movements like Science for the People in the US or the British Society for Social Responsibility in Science, which brought scientists and the public together in the 1970s to try to find ways to do science that was relevant to people’s lives. (For more background on these movements, see Alice Bell’s article in Mosaic).

Now, I’m not suggesting that science doesn’t touch people’s lives in many different and important ways today – clearly it does, and that’s worth shouting about. But there is a sense of powerlessness out there, felt by many people. And I wonder what science and scientists can or should do to address that?

So, I see the march for science as that quintessentially scientific thing: an experiment. An experiment that may well fail, that may have to be repeated with improved methods, or to test a modified hypothesis. But an experiment that is still worth trying because it makes you think and, I hope, will get people talking.”

2 Responses to The March for Science: advocacy masterstroke or PR misfire?