I am on holiday – in Mauritius, a tiny tropical island in the Indian Ocean. And when I go on holiday, I make ridiculous plans. 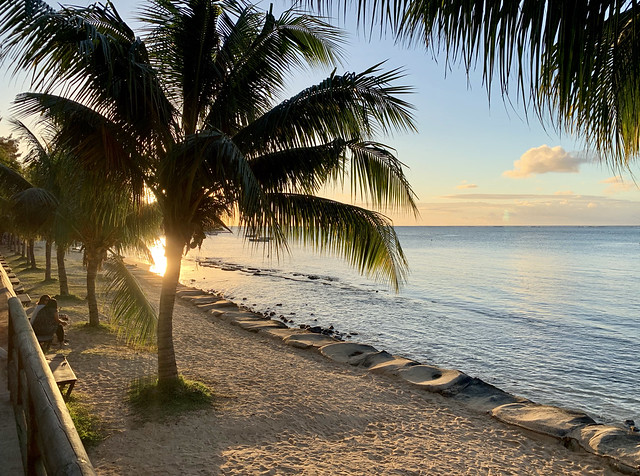 I told myself I’d start running again. I’d get up early every morning, slip out of bed without disturbing my wife and cross the road to the beach. It might be hard at first but I could jog along the compacted sand at the shoreline, the sun rising at my back. It would be good for me.

I told myself I’d write every day. I’d get up early, slip out of bed without disturbing my wife, make a pot of coffee and sit at the table on the patio overlooking the tropical garden. It would be time just for me; a chance to get back into the groove now that I have a week free from the agitation of work.

I told myself I’d read four books. I packed Philip Ball’s Beyond Weird, William Goldman’s Adventures in the Screen Trade, Bill Browder’s Red Notice, and Manhattan Transfer by John Dos Passos. (Is it that my interests are broad or that I lack focus?)

I told myself the holiday would be a chance to reflect, to dig deeper into some of my preoccupations at work. I would have the time to really think about how to weave together the elitism of a research-intensive university with the equality of opportunity that the integrity and values of the idea of the university would appear to demand. And how to achieve that in the midst of a society that claims to appreciate variety but has never really been comfortable with difference.

I told myself I would have time to muse on what more I can do to advance the aims of DORA, the Declaration on Research Assessment (which I chair). The argument for reforming research evaluation is technical and slippery. How to inspire and facilitate changes that will truly bring out the best – defined as broadly and meaningfully as we can – in scientists and scholars?

I told myself I’d avoid emails, and Brexit, and social media.

Five days into our holiday, I have done almost none of this. No running, no writing beyond this scribbled post, and precious little in the way of deep thought. I have finished Philip Ball’s book on quantum mechanics and started Goldman’s gossipy account of life as a Hollywood screenwriter. I have lacked the discipline to keep away from emails altogether – though keeping in touch while giving myself permission to ignore work has helped my equilibrium. I have tried my best to wrestle free of twitter and Brexit but they do clamour so.

But I have succeeded in swimming in the turquoise sea that surrounds the island. I have sat on the beach listening to the rumble of the white lines of surf breaking over the distant reef, while the water swishes and laps at my feet. I have felt the bloom of the sun’s heat on my face as the blazing orb emerges from cloud cover, and seen its light turn the sea and sand to silver and gold. I have chatted and reminisced and laughed with my wife and children over cocktails at a beachside bar. I have been surprised to find Jupiter in the southern night sky almost directly overhead.

So much for plans, but that will do nicely for now.

This entry was posted in Blogging, Scientific Life. Bookmark the permalink.

2 Responses to I told myself…