Comet NEOWISE – catch it if you can

Comet NEOWISE has come but not yet gone. If there is no cloud cover for the next night or two, you might be able to catch its wispy presence low in the north-west before it fades from view.

Don’t feel bad if you haven’t heard of comet C/2020 F3 (NEOWISE), to give this heavenly traveller its full name. It was only discovered on March 27 this year. There is no previous record of NEOWISE in human history because the last time it was in this neck of the solar system was about 7000 years ago. That’s how long you’re going to have to wait for it to come back it if you miss a sighting in the next couple of days. 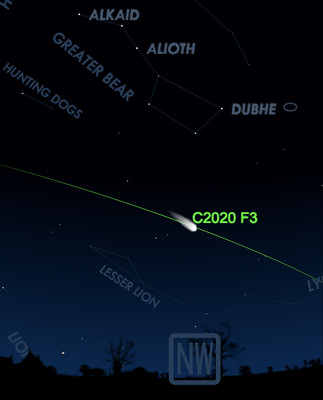 If like me you inhabit a light-drenched metropolis, you’re unlikely to have dark enough night skies to see NEOWISE with the naked eye. But with a bit of practice, you should be able to see its faint upward smear with a half-decent pair of binoculars.

The trick is to look  the to the north-west to find the Plough (also known as the Big Dipper)  and scan downward. My old Science is Vital pal, Andrew Steele has made a nice little video to help you find it.

This is what I had to do last night. I got my first glimpse at about 11 pm through the trees that block out most of the north-westerly view from my back garden. To get a photograph I took my binoculars, camera and tripod out onto the street. There I had a clearer view, but struggled to find an observation spot away from the street lights that didn’t make me look like I was poking my long lens into people’s bedrooms.

It took quite a bit of hunting to find the comet with the camera. I used a brute-force method, switching back and forth with the binoculars and taking snaps get the comet in the frame. If I were more familiar with the capabilities of my camera (Olympus OMD EM-5 MkIII, with a 75-300 mm zoom lens), this wouldn’t have taken so long.

Having found the comet, I could zoom in and experiment with shutter speeds to try for a decent shot. Unfortunately I am an amateur’s amateur and don’t have the gear needed to compensate for the rotation of the Earth. It turns faster than you might think, so even a 15 second exposure means that the comet and nearby stars show as short trails.

By cutting back to 4 seconds, I could get sharper shots. You lose a bit of definition of NEOWISE’s wispy tail. But glowing green core still shines.

I’ll be the first to admit that these pictures are not the greatest. Andrew got a much better image last night by stacking multiple photograph to get clearer shot. Professional photographer, Will Gater, did even better. But this was my encounter with NEOWISE, my moment of intersection with a fellow traveller. I wonder what it will find when next it swings by the neighbourhood?

This entry was posted in Astronomy. Bookmark the permalink.

2 Responses to Comet NEOWISE – catch it if you can