I made what I think was a smart move at the beginning of 2020. Instead of waiting until the year’s end and then struggling to recall what I thought of the books I had read, I created a Twitter thread of one-line reviews as I completed each title. Here, finally, is the entire thread: 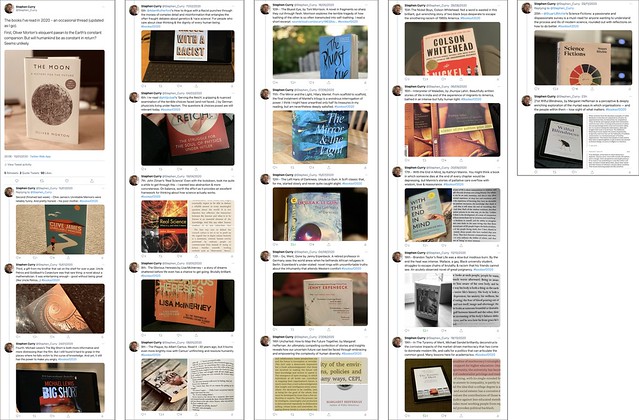 You may find it easier to scroll through the thread on Twitter.

It has without doubt been an exceptional year. The arrival of the coronavirus pandemic in mid-March disrupted my working and commuting patterns in a major way, but it didn’t seem to create any extra time for reading. The time freed by the loss of a daily commute of at least two hours was absorbed by the expansion of the working day. I have if anything undershot my usual annual tally. No matter. It’s not a competition.

My habits did change somewhat: almost half of the twenty-one books I read were novels. Normally, I only manage three or four. I also succeeded in reading my highest ever proportion of women authors – 48%. One of these, Hilary Mantel, produced my favourite book of the year, The Mirror and the Light, the final instalment of her visceral and magisterial trilogy on Thomas Cromwell. I have already pegged her earlier novel on the French Revolution, A Place of Greater Safety, as one to tackle in 2021.

Otherwise, it is a little harder to discern the highlights. That’s not because of the books themselves. I think that is more of a reflection of the dulling effects of life during lockdown, where days without events blend into one another, the colours of life merging into a dull monotone.

But some do stand out. Oliver Morton’s The Moon: a History of the Future was that rare thing, a book of poetic non-fiction, while my first encounter with Toni Morrison in The Bluest Eye was short and sharp and cut to the heart. Brandon Taylor’s first novel, Real Life, is one of the few I’ve ever read to bring life in a laboratory to life, through the tortured isolation of its gay, black protagonist. By contrast, Kathryn Mannix’s hospice stories, With the End in Mind, brought death to life in a way that was blessedly reassuring.

Only one novel disappointed me: The Left Hand of Darkness by Ursula Le Guin. I know it is regarded by many as a classic, but I was left out in the cold by its icy, alien landscapes. Everything else provided many moments of delight and insight, words to map out the world a little more clearly than before. I am grateful to all the authors I read. But for some reason the non-fiction titles figure more sharply in my memory, so I am especially thankful to Adam Rutherford for setting out his anti-racist manifesto (How to Argue with a Racist), to Philip Ball for unpicking the entanglement of physics with Nazism (Serving the Reich), to John Ziman for delineating the boundaries of science (Real Science), to Stuart Ritchie for his accounts of how and why those boundaries are crossed (Science Fictions), to Michael Sandel for examining the underbelly of ‘merit’ (The Tyranny of Merit), and to Margaret Heffernan for charting a more human course through the complex endeavours of organisations (Uncharted: How to Map the Future Together and Wilful Blindness).