I went to Brussels this week for a Plenary meeting of the European Research Council’s Scientific Council. It was a strange week to go. As I sat on Eurostar and stared out at the passing countryside I strongly felt, what am I doing here, do I belong, why will they want to see me and, perhaps most strongly, WHAT HAVE WE DONE? As a scientist I was one of the greater than 80% (precise number depending on which journal or newspaper you read) who wanted to stay in the EU. Maybe we still can, or at least have access to it. The optimists amongst us can speculate wildly about possible still-favourable outcomes. We can daydream that reality will sink in about the economy so that, whichever politician currently thinks they are in control will step back from pulling the trigger of Article 50. Regrettably during the week this looks less and less likely. However, in the interim, work has to be done, and keeping the ERC running smoothly is part of that.

So, I arrived feeling maudlin, wondering why no one had graffiti-d over the ‘Britain is great’ signs in the Gare du Midi terminal and considering how long Eurostar would give me such a smooth ride without guards checking my passport in the Chunnel or separating me from those with EU passports for more thorough scrutiny. My ERC colleagues were delightfully supportive – and depressed. It was the main topic of conversation. The question ‘what have you done?’ was echoed; comments such as ‘it’s a sad day for science’ floated around. Still, work to be done and part of that work was a long-scheduled meeting with Commissioner Moedas, who of course brought up Brexit. The issue of Brexit was also separately discussed with the Council at my request. 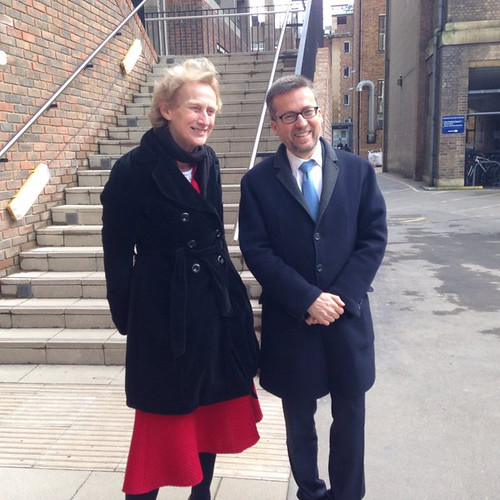 There is huge anxiety among researchers in the UK both about existing ERC grants and about those they thought they were about to put together. Likewise about the other pillars in the H2020 programme. Those fears are entirely understandable. However, let me stress the reality. Nothing has changed for the time being.  Moedas has been reinforcing that message  as has the Commission as a whole. The UK remains a full member of the EU. UK Host Institutions are still able to host grantees and grants; eligibility to apply has not changed just because (remember, a constitutionally non-binding) referendum has occurred. We cannot peer into the future to know whether optimism or pessimism about the future applies. There is of course uncertainty, and will be for months if not years.

Some time-bounds can be placed: Article 50 allows for 2 years of negotiation before a member state has to leave so, given we haven’t yet triggered it and it is hard to see there can be anyone with even a shadow of a remit to do so in a position to take action till the autumn; given also that we do not have a huge team of civil servants with nothing else to do but complete the negotiations and all the expertise required to do so expeditiously, I think we can safely assume nothing will change for at least 2 years.  So folks, I think you should not give up on present or future grants with the ERC just yet! And, if a move to Associated Country status can be accomplished as soon as we formally cease to be a member state, then we could still access the funds thereafter anyhow with a smooth transition. However, and this is a big however, achieving such a status would still require free mobility of workers so cannot by any means be guaranteed given current noises from politicians. I am simply trying to put the facts as I understand it on the table. Emotion cannot enter into these legal niceties.

I felt Commissioner Moedas entirely understood the anxieties. He wants to work with the community and is absolutely clear that, come what may, he will still want to call upon the UK’s scientific expertise when it comes to advice (as he does upon nationals of any country as appropriate). I had the opportunity to speak, in as far as I was able, on behalf of the majority of UK scientists who were solidly IN.  I know he is listening to and in direct contact with many key players from the UK as the dust settles. It cannot resolve the uncertainty and, just as with all parts of the Commission, he cannot negotiate separately for the sector. Free mobility of researchers is something scientists collectively value greatly, through EU schemes and much more broadly. It is non-negotiable for the EU as it is across the entire workforce regardless of sector. We will have to work closely with UK politicians to make sure they hear that message.

There is another worry that I have heard expressed. Not only that EU partners may not wish UK researchers to be involved as collaborators in wider H2020 programmes (something that is hard to determine and worrying, but plausible and impossible to prevent in a risk-averse climate), but that grants with a UK PI may be disadvantaged by way of ‘punishment’, as I have heard it expressed, during evaluation. The ERC Scientific Council discussed this. As has been stated by a Commission official, ‘evaluators would receive “additional briefings” to avoid such bias.’ Since its very inception, excellence has been the only criterion to be used in evaluation of ERC grants and the Scientific Council discussed this explicitly, with a view to their own panels being specifically reminded of this fact in guidelines. I hope this helps to reassure UK scientists.

None of this alters the potential loss of funds and funding opportunities the community is facing. But as yet it is just that: potential. Individuals will have to choose whether to run scared as of today, be it as a collaborative partner turning down a UK team’s involvement or a UK PI deciding not to put together an application. If they go ahead they can be sure they won’t be discriminated against but, they cannot currently be sure they will be able to hold the grant for the full 5 years within a UK institution. My own view is clear. Researchers should proceed as if this is the best of all possible worlds. It isn’t, at least with certainty, but to do nothing for the next two years just in case it all goes belly up doesn’t make a whole lot of sense to me, particularly for young researchers. An awarded Starter Grant will always add lustre to a CV after all, and is portable.

I wanted to give my view of things from Brussels. Not rosy, but not yet definitive. I hope the community absorbs what is going on in terms of grants.

However, there is one further aspect that both the President, Jean Pierre Bourguignon and Commissioner Moedas spelled out. Far beyond our parochial problems, across the EU, the disaffection with experts, with evidence and with science is obvious. As a community we all need to work harder to reach out to those who hate what we stand for, seeing us as an irrelevant elite in their lives. I’m not sure how this can be done. Pop stars and celebrities were mentioned so perhaps we need to work harder with the likes of Dara O’Briain, Lily Cole and Robin Ince to get the importance of what we do into mainstream conversation and media. Anyone who has influence with the Daily Mail, the Sun, Hello or Grazia perhaps particularly could work on their editors to include more articles which might appeal but also contain a grain of solid science.  I hesitate to suggest input to Fox and Sky News but no doubt they are also highly relevant. I have no such contacts or I’d be working on them. Anyone who does – go for it! The community needs to do more collectively on this front. Equally we need to be vocal about the imperative of addressing inequality of all kinds if we are to have a just society as well as one in which science is seen as relevant on a daily basis.

This entry was posted in Research, Science Funding and tagged Brexit, ERC, funding. Bookmark the permalink.

6 Responses to Science Funding from Europe and Commissioner Moedas