I’ve been away for the past week somewhere where I really could escape my email. (My previous post about whether one should read email on holiday was written with feeling!) When I go away I particularly like to go somewhere with water, frequently close to the sea. This year I had the pleasure of staying in a cottage overlooking the River Wye. I could sit in the sitting room watching the water go by from a height of around 30 feet above the river. It was a very strange sensation looking out at the trees in front of me but not looking at ground level (see photo). Temporarily I was confused; it was like sitting up in the treetop canopy, observing pigeons and tits at eye level. It felt quite bizarre. 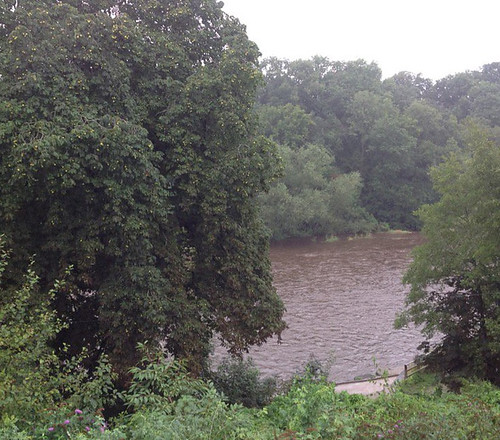 But to return to the water. Why Is watching water so soothing? I have known how much the sight of shape-shifting, moving water means to me ever since I worked in the Lake District during my gap year. I well recall sitting, watching – for long periods – a mountain stream tumble down, feeling relaxed by the sight of the ever-changing torrent. The constant fluctuations of the water make up something always fresh and new and hence a renewal (bringing hope and revitalisation perhaps, that can accompany renewal). Something both restful to the soul yet turbulent in itself. The flames in an old-fashioned coal fire must have had a similar hypnotic effect, producing Rorschach Test-like shapes for the mind to ponder or simply setting the brain free from its usual trammels.

In a lively river there is always something different to catch the eye, yet one doesn’t have to think about the meaning of any of it (unless one wants, but personally I try to keep fluid dynamics and a physicist’s brain out of it). I think this is why it is possible to watch indefinitely whilst leaving the mind at liberty to roam where it will, email-free.  I believe such a wandering mind enables the tangles of an academic year to sort themselves out a little. Battles, alliances and misalliances can be sorted through and put in the proper pigeonholes without the pressure of proximity to burden the process. The imagination can run riot to freshen ideas for future grants or collaborations. Such sifting is a great way of clearing the brain for the year ahead. People may say that this is what dreams are for but I have never found them in the least bit helpful, or even generally obviously relevant (anxiety-dreams apart). On the contrary if they are genuinely telling me about my subconscious ramblings then they would seem to imply some disturbing directions of travel. I certainly don’t wake thinking that now I have organised my brain.

On this occasion just to be able to watch the rippling river flow past below me – even if double glazing meant I couldn’t hear its pleasing splash – meant that I could relax enough in an easy, mindless way. The pleasure was enhanced by the occasional glimpse of a blue streak of kingfisher flying past; or the sight of it perched on the far bank in the branches of a willow whilst myself still perched on my comfortable sofa. (The downside of having seen it sitting there once, however, was that I was constantly picking up my binoculars to look for it again.)

I come back I trust with muscles well exercised from hill walks as well as well as a brain rested by my river-watching. The new academic year beckons with its myriad new challenges. I hope, like the river patterns, I return revitalised.

This entry was posted in Academia and tagged holidays, River Wye. Bookmark the permalink.