If my last post discussed an important point that doesn’t typically receive much notice – although I’m glad to say the post, and its accompanying repost on the THE website both did – this current one is meant simply as a piece of fun. I write from Brussels where I have been attending one of the ERC’s Scientific Council plenaries. I am amused by the notice in the lift, shown below, listing the different meeting rooms my hotel has for hire. The names surprise me…. 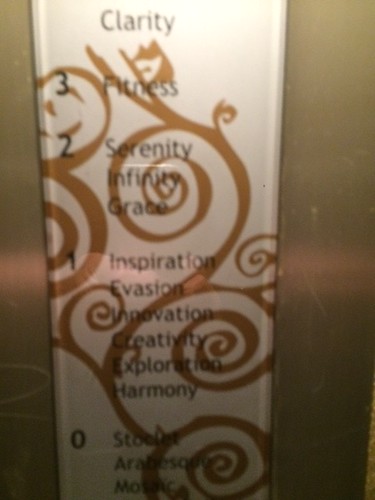 Evasion???    Innovation, creation and even harmony I can understand. But what is one meant to take away from a meeting room entitled Evasion? Role plays about how to be a politician and never answer a question perhaps? Media training has taught me a bit about that:

That’s a very interesting question. Now let me tell you about….

and a segue into something totally different that is the point you want to get across and not the awkward question that the interrogator really wants the answer to.

Or perhaps you don’t know the answer to how many million unemployed there are, or what the percentage of GDP that is spent on research is, in which case evasion is a useful technique to cover up ignorance:

I’m glad you asked me that question. I’ll leave it to my Honorable friend on my right to give you the precise figures.

Then there is the case of evasion to avoid self-incrimination. In the UK we don’t have the opportunity to ‘plead the 5th’, so one has to rely on some other form of extrication. The simplest trick is simply to reply ‘no comment’, but that is a give-away of guilt as often as not so more subtle responses are preferable. I suspect these will usually implicate others in any wrong-doing. So, for instance, the answer to

‘Did you know your grant money was being improperly spent?’

‘I leave such details to the administrators’;

‘Were you aware there was serious bullying going on in your group?’,

‘I consider that a matter for HR.’

Those answers probably won’t get anyone off the hook, but they might buy some time.

Evasion is not a tactic that smacks of high probity or integrity. So why name a meeting room after the ploy? Is there some meaning of Evasion in Walloon that means something more honourable, or was the room named by an irritated visitor to the city frustrated with the behaviour of Eurocrats? In an idle moment I’ve come up with a list of alternative words ending in –ion that I feel would have been preferable, plus a second list that I think are on a par for unsuitability. Please amuse yourselves by adding to both these lists!

This entry was posted in Science Culture and tagged Brussles, ERC. Bookmark the permalink.