Visiting the Roots of the Industrial Revolution

I managed to sneak in a few days break in Derbyshire between two major College activities. It was good to escape to a less flat landscape than Cambridgeshire can manage and stretch my muscles up the steep hills that the small town of Wirksworth offers. Sitting at the south end of the Peak District just outside the National Park, it has a most unusual layout: on the hills there remain many little alleys joining houses that don’t sit on roads at all. Clearly, over the years, the houses were built wherever there was flat space enough for foundations, regardless of (and obviously pre-dating) vehicular access of the modern variety. The particular part we were staying in is known as the Puzzle Gardens. I am not sure if this name derives simply from the fact that it is a puzzle to find your way around these ‘ginnels’ – although it certainly is – or whether there is some more subtle origin for the name.

Wirksworth was home to the Babington family, of Babington plot fame. Their house was built from stone quarried essentially from their back garden, which meant the house we were staying in – early 19th century I think – and which was located immediately above it, sat on an artificial cliff edge. The local landscape was largely determined and dominated by mining and quarrying activities. Hence this particular house we rented had at one point been used as a doss house for the workers in the quarries, and had housed 11-12 people in what was little more than a one-up-one-down structure. Initially lead-mining had been the main industry, but as this faded limestone quarrying took over: at least some of the hills and ridges that made up Wirkworth were undoubtedly man-made.

The main local walking route, the High Peak Trail, itself was an old railway. Not a passenger railway and perhaps more accurately described as a tramway, it was built for industrial transport (largely of the quarried stone) over routes canals could not cope with because of the hills. The inclines were steep indeed, with the climb from High Peak Junction (where the railway joined the Cromford Canal) being approximately 1 in 8 – not something you’d find on a current mainline in the UK. The engineering was clearly cutting edge for its day, and some parts (such as an engine house at Middleton Top) were still visible though long out of use.

The Cromford Canal had other links to major industry, with Cromford being the site of Richard Arkwright’s first mill, a water-powered cotton mill. 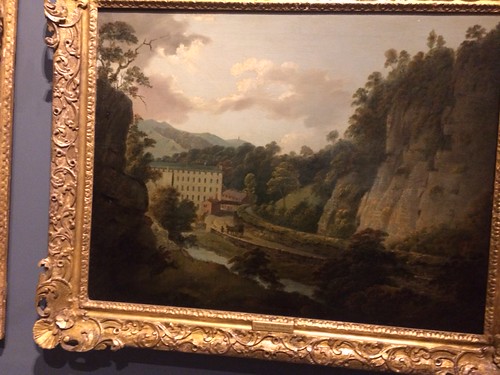 Joseph Wright’s painting of Cromford Mill, exhibited at the Museum and Art  Gallery in Derby.

Initially apprenticed as a wig-maker in Lancashire, Arkwright moved south to Derbyshire and became one of the most highly successful entrepreneurs of his day. However his acquisition of the patents for the water-powered spinning frames was not without dispute (he was ultimately stripped of the patents long after his factories had made him a mint of money). He introduced what became the norm of factory work, a twelve hour day; thirteen if you include the ‘generous’ hour he gave for lunch – which allowed time for the maintenance of the equipment so no working time was lost. The Mill itself is in the process of restoration, but there is little (at least currently) to give a real flavour of what the place must have been like at its heyday. When I last visited around 20 years ago my memory is that there was a better display rather than the more modern ‘experience’, but no doubt this is a matter of taste.

To prove to the world at large how successful he had been, Arkwright – who towards the end of his life was knighted – built a fantastic ‘castle’ (Willersley Castle, now a hotel), just up the Derwent River. 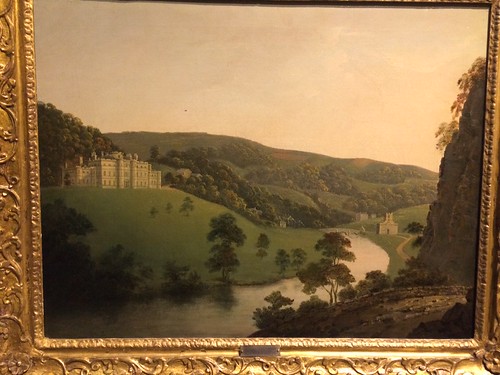 Willersley Castle and the Derwent, painted by Joseph Wright

He never got to live there but his son (also Richard) did. Arkwright senior married his daughter Susanna off, in standard social-climbing form, to a local landowner, Charles Hurt, and they moved to Wirksworth Hall close to where we were staying. He also made sure the various members of his family, including himself, were painted by the local star portrait painter Joseph Wright (always known as Wright of Derby, although why he uniquely amongst British painters is known by his location is unclear to me). 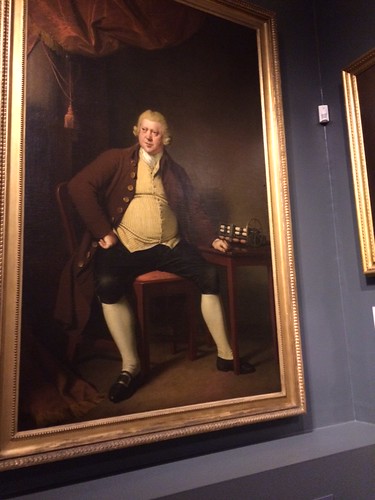 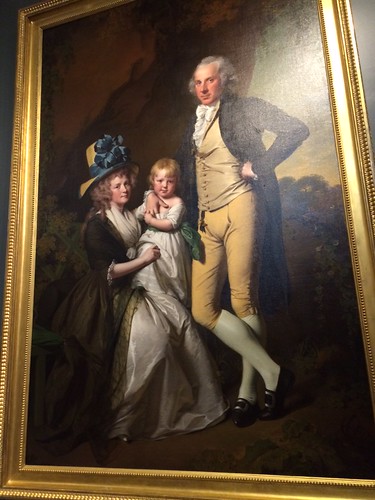 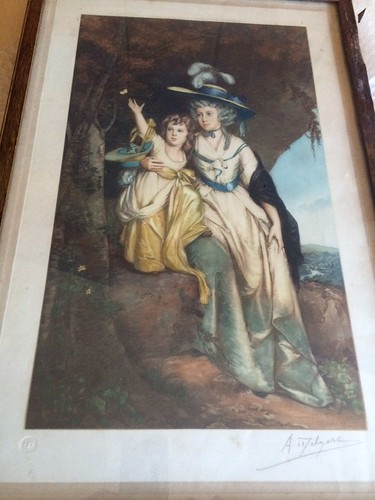 Both paintings by Joseph Wright

(I like the similarity of hats in these paintings! Fashion being dictatorial no doubt)

Those of Arkwright senior and junior are in Derby’s Museum and Art Gallery (that of his daughter in a private collection) where they sit adjacent to a (in this case reproduction) portrait of Erasmus Darwin, whom I’ve written about before as one of my heroes. The Darwins and the Arkwrights lived close to one another but seem to have moved in very different circles and I am not aware of any obvious interaction. The Darwin family were non-conformist and intellectual – as were all the Lunar Society members; the Arkwrights were enterpreneurs rather than intellectuals, and built a church in Cromford for the mill-workers they brought to work and live there. Presumably this is why there was no overlap at a time when class structures and religion provided sufficient grounds for difference and separation.

I learned a lot from this brief visit to Wirksworth and the wider Derwent Valley, which played such a significant part in the development of the Industrial Revolution. It was good to get away and recharge batteries.

This entry was posted in History of Science and tagged quarries, Richard Arkwright, Wirksworth. Bookmark the permalink.

1 Response to Visiting the Roots of the Industrial Revolution