50 Years Is Not Long Enough

Last weekend I returned to Girton College to join the celebrations for 150 years since its Foundation (albeit the college was originally situated in Hitchin). This was the college of my undergraduate and postgraduate years. When I entered the college in 1971 its centenary was not far past, so all but 50 years have passed. This coming weekend alumni will be coming back to Churchill College to celebrate fifty years since their own matriculation, so this magic figure of 50 is rather in my mind. It is interesting to reflect on just what has changed, and what has not. 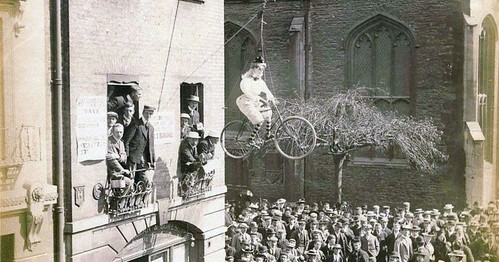 First of all, the university overall has changed a little since the effigy of the photograph was hung outside the Senate House in 1897 when a vote was taken about whether women should be afforded degrees. I have always found it a deeply chilling image, even if it is only a dummy. The answer given at the time was in line with that image, a resounding rejection of women being allowed the right to a full degree. 1897, note, was seven years after a woman (Philippa Fawcett of Newnham College, the second women’s college in Cambridge, founded a couple of years after Girton) came top in that most esteemed of subjects, the Maths Tripos. Coming top was accorded the title of Senior Wrangler, but Fawcett was denied that title, despite having sat the same exams as all the men and scored 13% more than the next top mark. Instead she was simply listed, in the – separate – women’s list as being ‘above the senior wrangler’.

So, no one could be in any doubt that women could succeed in degree exams, but yet they were denied degrees. Denied, so that they could not participate in University governance. Yet men who had idled their way through their undergraduate years to a poor degree could not only receive that degree, but return to Cambridge to vote in large numbers (special trains were laid on from London) to register their disapproval of smarter women being given their due. Shamefully, women were not allowed to obtain full degrees at Cambridge until 1948.

When I was at Girton, it was still an all-women’s college. Had I been a year later in arriving in Cambridge, maybe I would have joined Churchill, the first previously all-male Cambridge college to vote to admit women (as I wrote about earlier this year as we celebrated 50 years since that momentous vote) and one of the group of three that first admitted them in 1972. Rereading the book (Women at Cambridge, a Brief History, by Felicity Hunt* and Carol Barker) I was given celebrating 40 years of women being fully admitted, I find a photograph (below) of the 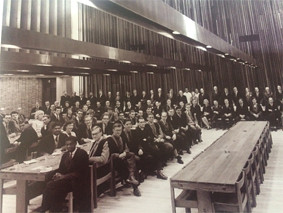 opening of the dining hall at Churchill, the largest in any college (then and now), whose caption states

‘women were present as guests at the first dinner to take place in Churchill College’s new dining hall in 1964, long before women were admitted as fellows or students. Mixed dining is said to have been even more hotly contested than the admission of women.’

I can’t see the Duke of Edinburgh in that photograph, but he was present at a special dinner to celebrate that opening in 1964, and remarkably also returned to celebrate the 50th anniversary of the opening in 2014. On that occasion I was present, not yet as Master (it was a few months before I took up the reins) but I was presented to the Duke by the then Master Sir David Wallace, as the photo shows. 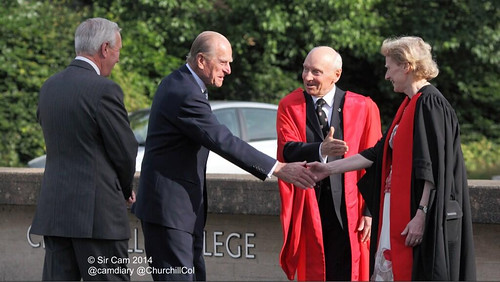 To return to my Girton years, one of its Feasts (the Scholars’ Feast I think, perhaps the College’s only one, I’m not sure) was to celebrate the momentous 1948 admission of women to degrees. It included the singing of songs, rather peculiar songs as I recall, written in former and slightly unimaginable times when it seemed natural for young ladies to sing songs about a hockey match between Girton and Newnham. The one I remember had a memorable chorus including the lines – still engraved on my memory –

Run! I thought I should have died
Knocked it through the Newnham Goal!

Even all that time ago, that song seemed distinctly archaic. Furthermore, I’m afraid that was the evening I disgraced myself by sniggering when told the story about the admission of women to full degrees when previously they had only been known as BA Tits: who could have dreamed up that abbreviation of titular with a straight face! My levity was not well received.

So, things have changed, as no doubt the alumni returning to Girton last week and Churchill this coming weekend will notice. There are far more women in the university, even if numbers in subjects like maths and physics remain stubbornly low. Varsity recently pointed out that there were only 35 women amongst the 234 students admitted to read maths last year, the lowest number in the last decade. Unlike Oxford, Cambridge expects UK students both to have got good results in double maths A-Level and also in the STEP (sixth term entry papers), both factors limiting the range of schools that can send pupils to Cambridge as well as deterring many women who don’t want to wait out the uncertainty of STEP.

Nevertheless, things have changed on the gender front, however slowly. We are about to achieve three women professors in Physics for the first time, although that number will likely drop again in a year when I retire from the department. In 1985 I was the first woman to hold a lectureship in the subject, although there had been some notable women before me in the department including the crystallographer and Girton Fellow Helen Megaw. Katherine Blodgett, the American and inventor of Langmuir-Blodgett films, was the first woman to gain a PhD from the department in 1926. I think I am glad I did not discover my own ‘first’ until many years later, as I might have felt more of an outsider than I did at the time, although I certainly knew I was the first woman on the academic staff to give birth, and that within my first year as a lecturer.

Things have changed, and yet – as was made plain at this week’s Vice Chancellor’s Equalities Day – we have still so far to go on diversity issues ranging from the percentage of female professors, the tiny number of black professors, the gender pay gap, the continuing issues around harassment, sexual and other types, and the BAME attainment gap. Diversity and inclusion may be a well-intentioned goal but, as my last post makes clear, good intentions are far from sufficient. 50 years is both a very long time and not nearly long enough to see true equality and equity in this university as in, I would guess, just about any other.

* Felicity Hunt was the administrator looking after women’s issues both at the time I had my children and had to negotiate about maternity pay, and with whom I worked when I first took on the Women in Science, Engineering and Technology Initiative, WiSETI. It was lovely to see Felicity, long since retired from the University, at Girton this week.