Shenanigans with the Railways

Rules about railway tickets have clearly always been mysterious, as this Punch cartoon of 1869 makes clear. 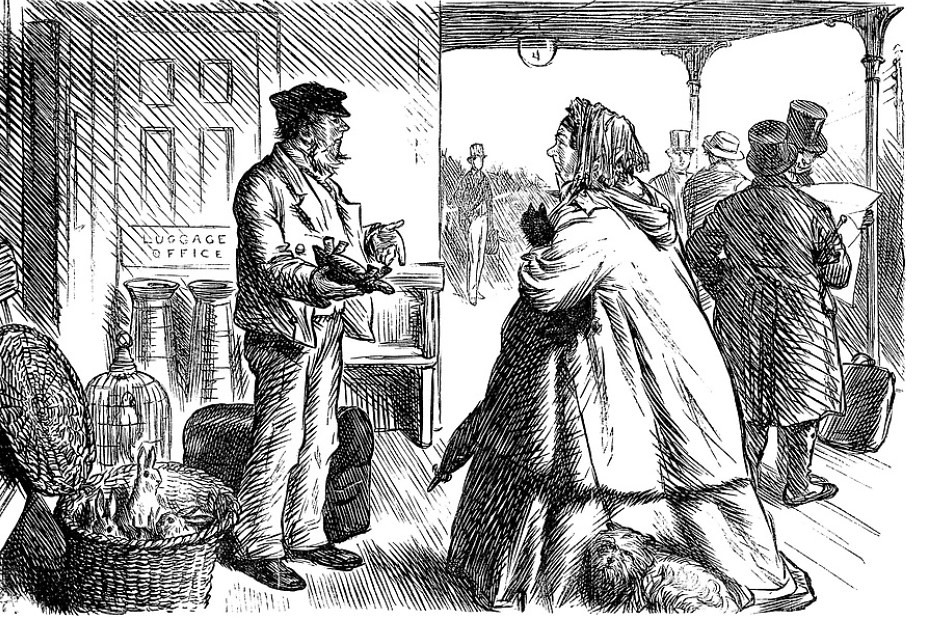 In that case a station master (do such people even exist now?) made up some guidelines for the cost of taking a tortoise on a train. In my case most of the (lengthy) exchanges took place by email, but the ‘rules’ applied made about as much sense.

In early November I took a train to London to present a talk on diversity issues at Kings College. Or so I thought. All was going well for the first twenty minutes or so, when the packed train came to a stop somewhere the Cambridge side of Letchworth. We waited and waited. In due course we were told there was a power outage somewhere ahead and in due course the train was reversed all the way to Baldock. By this point I was already so late I knew I wasn’t going to make my conference ‘slot’ and, rather than hope that the train company (Great Northern) would work out some way of getting me to London eventually, I chose to take a train back to Cambridge: for reasons that weren’t clear to me trains were still coming through in that direction. I got back to Cambridge Station about three hours after I left. What a waste of energy. Ultimately, I gave my talk, by Skype, at some completely rearranged time during the afternoon. The organisers were incredibly understanding (these communications mainly by Twitter DM) although, despite the desirability in general of more talks being given by Skype to reduce everyone’s carbon footprint, I didn’t enjoy the experience. Perhaps, with more time for preparation and checking of the technology I’d have felt better.

So far so bad. As usual when a train journey goes awry, inevitably not an unfamiliar experience, I filled in the delay-repay forms online, stating I had arrived more than 120 minutes late and was entitled to a full refund. A few days later I got a reply. It was not helpful, and it certainly did not send me a refund. Instead, it said that

‘Our delay repay team have looked into this and passed your information to refunds as you have stated you did not use the ticket to travel. If this is the case, you would be entitled to a refund and not delay repay compensation. The refund would be the responsibility of the original retailer as they would hold the funds from the original sales transaction.’

and told me to contact Greater Anglia who run Cambridge Station. I immediately replied pointing out I had indeed travelled – to nearly Letchworth and back – but had not arrived at my London destination. Several days later I got a reply saying I had to fill in a paper copy of the application since I needed a refund. So, I did and, as required, sent in the original ticket attached to the form.

A while later I got a letter stating, in essence, that they suspected me of fraud because

‘we have found an identical claim on our system’.

Not that the word fraud was actually used, but that was the clear message. Burying my anger with the insinuation I again did as asked to do if I suspected this judgement was ‘in error’, and attempted to fill in the online form – again – only to hit a brick wall as now I didn’t have the ticket (sent with the hard copy form) with all its requisite numbers on and so couldn’t proceed to the bit where I could have explained what the error was (namely, they had my previous application on file but had refused to repay me on the back of that). So I emailed to the person (or rather anonymous email address) pointing out what had happened and why I couldn’t fill in the online form again. They then came back to me saying, oh yes they could see the ticket and because I’d bought it at Cambridge I had to apply to Greater Anglia. But of course I didn’t have the ticket, they did, so I couldn’t apply to Greater Anglia as I pointed out in my next email

Their next reply was, even more helpfully, to the effect they didn’t have the ticket (!) but I should apply to Greater Anglia. I was, as you can imagine, getting pretty cross by this point about six weeks in. My replies were getting more and more acerbic as I pointed out that yes, they had already admitted they had the ticket and here was their email saying so. This time they noticed that, gosh, they did have the ticket after all so they would ever so kindly forward it to Greater Anglia. But I only received that particular message 24 hours after an email from Greater Anglia (who by this time had transcribed the date of my attempted journey to a month later; luckily this did not seem to impact on the exchanges as I feared it would) who helpfully pointed out

‘We have been unable to approve your claim as the train that delayed your journey was not one of ours. The train was operated by Great Northern.’

And that they, Greater Anglia, would forward my claim to, you guessed it, Great Northern. As a consequence I could immediately reply to the latest Great Northern suggestion that Greater Anglia would sort me out with a refund, by emailing back a copy of the latter’s reply saying they had sent the ticket back already to Great Northern. I do hope you’re following this…..

By this point I was more than cross. My next (and thankfully last) message said

In reply to your message of today, please see this message I received yesterday from Greater Anglia. They clearly think the problem is yours to fix not theirs. Will you please, finally, send me the refund everyone seems to agree I’m owed. The cost of your company’s time in all this faffing around will be exceeding the cost of the fare you owe me.

Still quite mild really, but it has had the desired effect. I think this time the email must have been forwarded up their chain of command since, for the first time I got an email from someone who gave me their full name and did not append the job title of ‘Customer Relations Adviser’ to that name. Whatever, it worked.  They have admitted that

‘We have looked into your claim and we can see that you are entitled to 120 minutes or more compensation.’

Indeed, that’s what I said from day one. I am not sure that being thanked for my ‘patience and understanding throughout the process’ is either adequate or accurate. I am not feeling patient, nor do I understand what absurd processes they thought they were following, let alone why they thought they could push the charge onto another operating company. I fear their understanding of ‘rules’ is about as good as that Punch cartoon of 150 years ago. However, the ‘cheque is in the post’, or so they say. I haven’t seen it yet….

This entry was posted in travel and tagged Great Northern, refund, trains, travel. Bookmark the permalink.

1 Response to Shenanigans with the Railways