As has been noted by many this week, there has been a deluge of output from the Department for Education (DfE), covering many matters that have been in the offing for months if not years. That the response to the Pearce Review on the Teaching Excellence Framework has been published with August 2019 on the cover is amusing, but it also says a lot about the way these issues are being tackled: non-urgently.

Since August 2019, of course, there has been a substantial reorganisation in ministerial responsibilities, and DfE has now absorbed the higher education agenda to sit alongside the 5-18 education it has always dealt with, removing it from BEIS (Department of Business, Energy and Industrial Strategy). Unifying all education in one Department might have been hoped to improve coherence, but it is clear that communications from the education and skills arena through to the utilisation of those skills in our businesses is woefully inadequate between these two departments. We definitely need a skilled workforce at all levels suitable to ‘build back better’ as the Government has promised, and to improve our economic output and overall productivity. However, as Richard Jones has pointed out in a series of tweets, joined-up thinking does not seem the Government’s strong point in this space, and the various documents pouring out of DfE seem to confirm that. Furthermore, the gulf between DfE and BEIS is not of new standing; it was palpable ten years ago, when HE still sat in (then) BIS. It mattered then and it matters now. 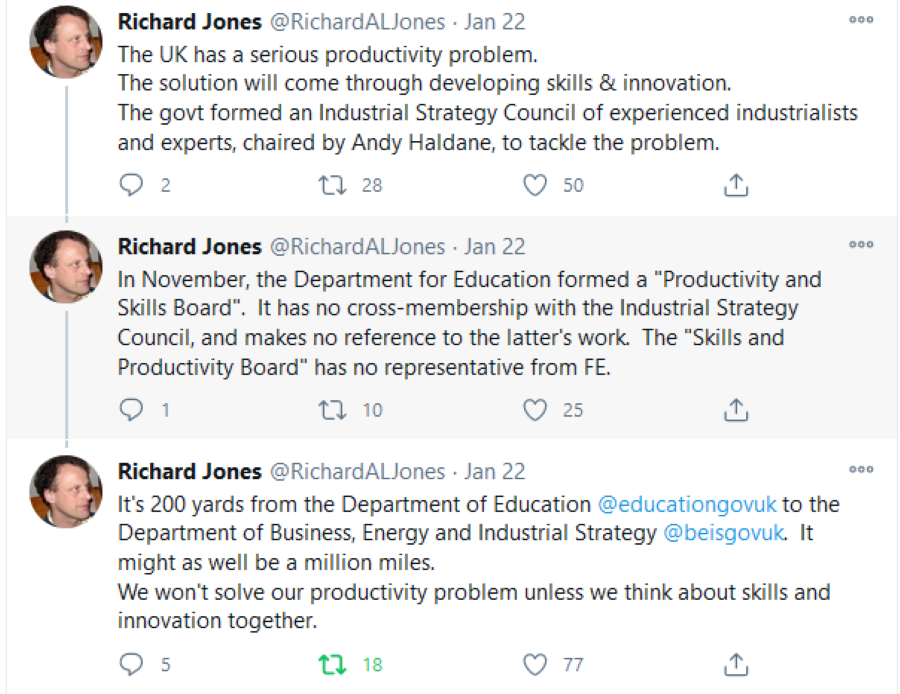 The response to the Augar Review isn’t really a response; it runs to a mere 13 pages in total and kicks the answers to the big questions about funding for which universities have been waiting anxiously into the long grass of the next Comprehensive Spending Review. All we know is there is a freeze on the fees’ cap. At the heart of the Augar Review was concern about the multiplicity of non-degree courses on offer, to the confusion of employer and potential student alike, and the poor funding situation, both for colleges and for students. There are some glimmers of hope about the latter, such as the Lifetimes Skills Guarantee, permitting from April 2021, any adult who wants to achieve a first full level 3 qualification (for instance a couple of A levels or BTecs), free access, paid for through the National Skills Fund. However, this is not new news, having been promised during the autumn. The more extensive (up to four years funding) Lifelong Loan Entitlement, meaning loans will be available for Level 4 and 5 qualifications on a par with loans for degree study, will not kick in till 2025 – NB another Parliament – and has not been approved by the Treasury. Quite an obstacle.

The most substantial of this week’s DfE output is the White Paper ‘Skills for Jobs: Lifelong Learning for Opportunity and Growth’.  Jobs….you might have thought BEIS would want –and be allowed – to put  some input into this; this is precisely where joined-up thinking is so crucial. However, a reading of the paper suggests this has not happened. Employers are most certainly mentioned and given a central role:

Employers will also be put at the heart of identifying skills needs and helping to shape local provision through close working with colleges and other providers; we will make strategic development funding available to colleges to support this.

However, exactly what this means is less than clear. As Andy Westwood has pointed out, employers are not exactly a homogeneous bunch and the larger employers in the more productive sectors are already likely to be involved more seriously with training and skills than those others in low-pay, low productivity fields. To lift people out of these low-skilled jobs, and to drive productivity more generally, one probably shouldn’t be relying on the latter class of employers to drive change or construct courses of an appropriate and well-understood standard. More courses, particularly if as a non-standard qualification, may only enhance confusion rather than subsequent productivity.

An interesting word in the above quote is ‘local’, presumably a nod to the much discussed (if not-so-apparent) levelling-up agenda. Of course, different parts of the country will have different needs: Hull has a thriving wind energy ecosystem, but Swindon less so, and so on. However, how specific are these new courses in the colleges going to be? For many employees currently under-skilled, there are a swathe of possible options and limited guidance as to what will help. If courses get too specific, then they will be less overall useful as life progresses, whereas some courses, such as basic digital skills, will be broadly helpful for almost all jobs.

There are undoubtedly areas where there have been long-standing shortages in supply of well-qualified job applicants, as the Augar Review highlighted. Given a persistent shortfall in areas such as construction, health and information technology, one has to wonder whether this new White Paper will lead to any significant change in supply given that all prior attempts have failed. It has to be faced, there has been an long line  of attempts to reform this section of the education and training system, as spelled out in grim detail here. One has to wonder whether this latest attempt is any more likely to be successful, particularly if the Treasury isn’t fully behind it, as Andy Westwood argues.

There is one final black humour aspect to this group of papers, touching upon the levelling up agenda once more. Except, that it would appear DfE is more interested in levelling down. The Secretary of State’s letter to the Office for Students setting out next year’s teaching grant and funding priorities, savagely cut the small remaining sums directed towards teaching in subjects such as art and design, music and drama, but also removed the London weighting that the capital has enjoyed for so long. Consequently, all regions outside London see a small increase in their teaching grant, but London loses nearly 14%. This is one way of making sure there is a more even distribution of funding to make regions closer to level, but it hardly fits with the message of ‘levelling up’. Another indication of how thinking is not joined up.