Getting Involved with Policy-making

Last week I presented evidence to the Commons’ Science and Technology’s Select Committee enquiry into Diversity and Inclusion in STEM. I don’t want to rehearse my arguments, which can be read in the transcript of the full morning’s session (or even watched), but to talk about other aspects of engaging with such enquiries. Suffice it to say that my impression was that this session was called to explore further the suggestion made in the committee’s previous session, that girls ‘just don’t like hard maths’ and so are put off doing Physics A Level. I think it would be true to say that none of the eight witnesses who spoke this week, including those coming from OFSTED and the Institute of Physics via a trio of school leads, had much to say in favour of that position.  It won’t surprise anyone that I likewise felt the problems in attracting girls into Physics lie quite elsewhere,

However, what I want to discuss here is the way a scientist might interact in general with policy-makers. The pandemic has, once again, shone light on the comparative lack of scientific expertise amongst MPs. Few of them have science degrees and it shows. Compare Angela Merkel’s explanations of the spread of a virus with remarks made by our Parliamentary leaders. One felt, as a former chemist, she knew what an exponential increase meant, for instance. It is, of course, not just the MPs themselves, but also those around them, be they SPADs or civil servants, who typically have not studied science to any high level. When I go to talk to student societies (at schools or in the university sector) I try to point out that there are fascinating careers in policy; studying science does not mean one necessarily has to become a scientist, but I do hope it means that the skills a science degree confers will be useful wherever a student ends up.

Looking later in a career, research scientists too have potentially so much to offer. To help researchers work out the routes by which they might do this, we (the Centre for Science and Policy (CSaP), the Bennett Institute of Public Policy through Diane Coyle and Churchill College) produced some online resources, outlining the different ways in which a scientist can bring their research to bear on political thinking. It’s not a topic that gets much air-time in formal structures, within my university at least. One might say surprisingly, given that this is certainly one of the ways to construct a REF impact case! For many of these academics, their research may have direct implications for policy decisions, as the pandemic has absolutely made clear. This has been a time when many scientists have found their voices through the media, as well as more formal structures. One of these – Professor Devi Sridhar, Professor of Global Health at the University of Edinburgh – will be my guest later this week for one of my public conversations here at Churchill College (there’s still time to sign up to attend, in person or online). She is someone who has had direct contact with the heart of the Scottish Government, talking regularly with Nicola Sturgeon, as she makes plain in her recent book, Preventable.

Formally, talking about girls and women and Physics is not part of my research career as a soft matter physicist, but I have spent a long time studying the issues, even if most of the ‘publishing’ has been on this blog or in other un-peer reviewed places. One could say this is a form of interdisciplinarity, since my experience as a research physicist is obviously relevant to my knowledge about the subject, but I am in no need of such a label since I’m not trying to obtain funding for the work. Nevertheless, trained as a physicist, I am capable of reading the literature and reading graphs, doing a little critical thinking and analysis and piecing ideas together.

In my reading, I was particularly struck by the graphs shown, from a paper in Science from a few years ago, that showed it wasn’t just Physics that had a hard time when it came to attracting young women into the subject, and the problem seems to be that people (parents, teachers, the media, students themselves?) associate brilliance with those subjects that are heavily male-dominated. 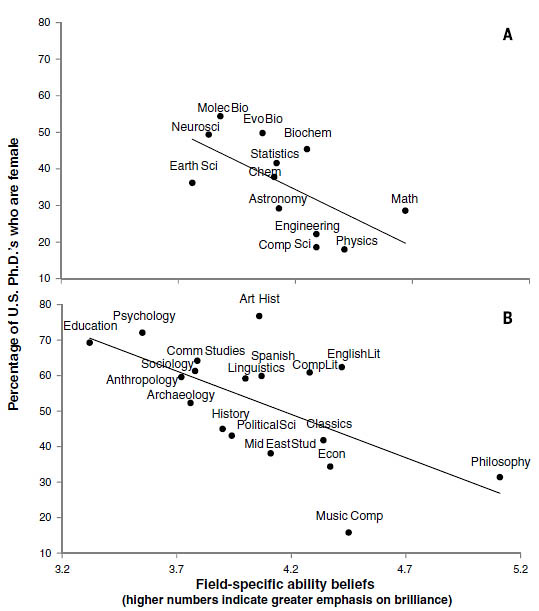 Plots of percentage of women taking PhDs in US universities in different disciplines versus a measure of brilliance, taken from Expectations of brilliance underlie gender distributions across academic disciplines, by Sarah-Jane Leslie, Andrei Cimprian, Meredith Meyer and Edward Freeland.

Of course, many in the world believe that brilliance belongs to men. These graphs have overlapping authors with the group that highlighted that children as young as six or seven have already fallen into the trap of believing that about who ‘owns’ brilliance. Thus, before one introduces misogyny and hostility into the equation, there are cultural issues to overcome for young women wanting to pursue such subjects. Diane Coyle, who I mentioned above, has written at various times about the problems with the male-dominated world of Economics. In 2017 she highlighted misogyny in the discipline in the FT; in her recent book Cogs and Monsters, she discusses the dangers a lack of diversity – extending far beyond simply gender ­– has for decision-making in the sphere.

The Parliamentarians are right to worry about these issues. As Caroline Criado Perez has spelled out in her book Invisible Women and as the Gendered Innovations website makes clear, many bad policy decisions can be directly attributed to forgetting that essentially half the world’s population are women. In Physics, as in Economics and many other disciplines besides, the imbalance is damaging to individuals and to society.

So, I was pleased to be invited to present to the Select Committee regarding diversity in STEM, my first experience of such an undertaking. Having said that, it was a nerve-racking experience. As for any sort of interview, preparation is essential but, however carefully one mentally rehearses arguments in the small hours, the line of questioning may head off in a direction far from what was expected and throw one off balance. This time, that only happened a little. I took advice in advance from those who had participated in a range of Select Committee sessions, including for this particular inquiry, and appreciated other people’s willingness to be open. I was also struck by one of these colleagues who asked, after the event, how long it took me to ‘come down’ after the session. The rest of the day, I said, (my session was at 0930 in the morning), expecting to be derided for this feebleness. Oh yes, I was told, that was their experience too. It is good to remember that all of us can suffer from nerves and tension around a new experience, particularly when it feels – whether it is or isn’t in reality – very important. As I’ve said before about other experiences, however, nothing is ever wasted.

2 Responses to Getting Involved with Policy-making