Impostors at a Conference

September has always been a busy time for conferences, and I have attended a fair few in my time. However, the one I attended this week was the first scientific one I recall having impostor syndrome publicly mentioned several times, both explicitly and implicitly. This was the conference to mark (belatedly) my retirement, and it was all of joyous, moving and weird from my perspective. No doubt there are other perspectives! You can read the report from the editor of Physics World, Matin Durrani, my former student and active participant in the meeting, to get a different view.

The conference covered many topics, because my research and scientific activities have, and a wide variety of different themes were teased out. It was organised, necessarily twice because the pandemic prevented the first manifestation coming to pass, by my long term friends and collaborators Richard Jones and Ruth Cameron. Ruth was my student; Richard technically was not, but as he put it I ‘offered a helping hand to waifs and orphans’ when his supervisor left the country. Listening to others describe my career, gave a very peculiar feeling. Who is this person whose life seems so logical and tidy, for instance, according to the narrative Richard constructed to open the meeting? I suppose the meeting fulfilled the wish Robert Burns expressed in his poem To a Louse

‘O wad some Pow’r the giftie gie us
To see oursels as ithers see us!’.

Research is full of dead ends, which if introduced would no doubt have spoilt the narrative. So Richard did not mention the thesis of a student whose every experiment came up with a null result, for instance, and glossed over the episode of the tilting cartridge I mentioned in my last blogpost, as well as other hiccoughs on the route to what I know appears to be a highly successful career.

My memories of the meeting, even only 48 hours later, are already rather a blur; there was too much emotion tied up in listening to all the talks for great clarity of recollection. I think it was Matin who described what he felt was the pecking order in the Cavendish when he arrived, with theoretical particle physicists at the top and the sort of work my group was doing in the messy world of soft matter (polymers, biopolymers, cement, food, starch granules, paint….all got a mention during the meeting) somewhere near the bottom. And also, how he felt that he was an impostor, even if he didn’t know the phrase at the time.

The idea of a pecking order is interesting: there are many versions of it in science of course, but there is absolutely no doubt that a complex system was, back in the 1990s when Matin joined me, all but beyond the collective department’s pale. I have not forgotten the comments from the (by then retired) Cavendish Professor, Sir Brian Pippard, that ‘things have come to a sad pass when people at the Cavendish study starch’. Matin wasn’t studying starch itself, but aqueous mixtures of biopolymers, relevant to many foodstuffs, during what Richard had termed ‘The Cheesy Wotsit years’ in his talk. (Yes, I worked on the vanilla version of Cheesy Wotsits, aka known as extruded starch foams, i.e. the wotsit sans flavourings and colour.) That was, and is, the kind of comment that can sap morale, and make one wonder what one is doing in a department, but I guess I’m fairly obstinate and I wasn’t going to let that derail me, whatever the angst the remark caused.

Matin was talking in a panel discussion on the difficulties of interdisciplinary working. Having my REF Interdisciplinary Advisory Panel colleague, anthropologist Veronica Strang, on the panel introduced a fascinating social science perspective on the challenges (in itself highlighting the importance of interdisciplinarity). She pointed out how the ‘other’ can invoke hostility, and I guess being interdisciplinary will always be ‘other’ to those who stick to the straight and narrow. Our current structures – departments and funding panels for instance – tend to favour monodisciplinary approaches, in part because of the teaching demands a department must handle. The panel itself was all the richer for its disciplinary diversity (the third speaker was Mark Leake, current chair of the IOP’s Biological Physics group of which I was the founding chair).

I got to say a few words after the dinner, and I returned to the impostor syndrome theme, this time explicitly. Regular readers of this blog will know that it is a topic I feel needs a good airing (e.g here) and it is a feeling that I am not ashamed to admit to. However, I still get the feeling that students and early career researchers imagine it is something one overcomes and then life is easier. I suspect most people suffer from it, whether or not they’ve got a label for their feelings, and I suspect for few of us does it dissipate, even if success attends us. Certainly, on the second day, there were several more senior scientists admitting to it, male and female. It can only be healthy for it to be acknowledged. It is good if it sneaks into a regular science session, rather than one simply aimed at confidence building or solely for women. We all bring our whole selves to our scientific endeavour, and impostor syndrome may well be part of that self.

However, it wasn’t a conference about impostor syndrome! I was touched by the way some of my former students recalled advice I had given them all those years ago. Advice such as ‘don’t be afraid to say no’, and ‘negotiate a better starting package’, were what erstwhile postdoc Aline Miller recalled (as well as ‘don’t wear jeans or they may think you’re a student’) when she went to take up a lectureship. The photo here that I took during Joe Keddie’s talk, about watching paint dry, indicates what he remembers of my advice, possibly updated overnight to bring in the imposter syndrome theme. (Joe was actually not working directly with me, but with Richard, but we wrote several papers together literally about watching paint dry. Much more interesting than you might imagine.) I would stand by all these pieces of advice and it moves me to think people took my messages to heart and still remember them so many years later. 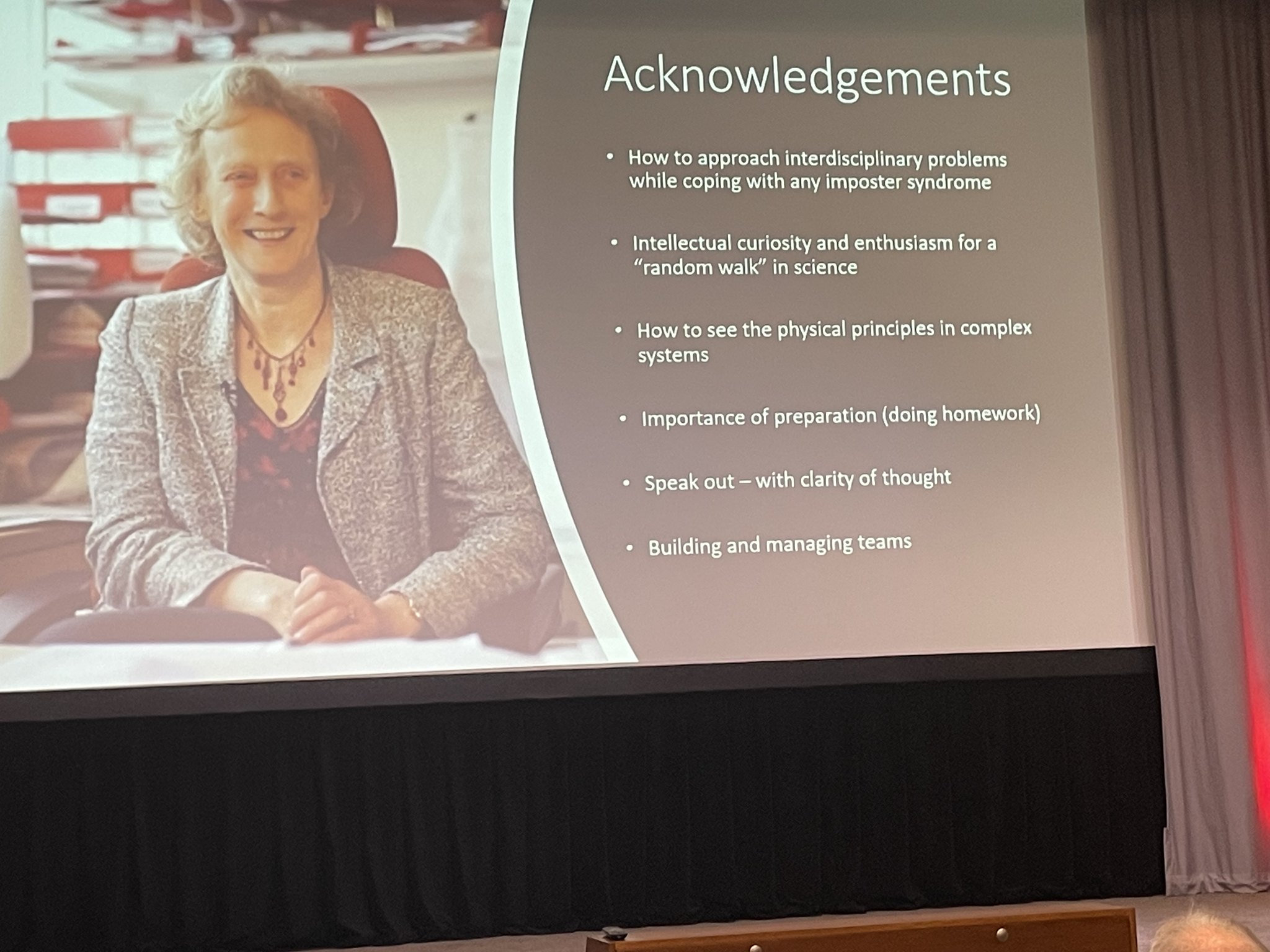 I guess I really am retired now, now the conference is over (although I am of course still Master of Churchill College for another two years). It was a wonderful conference, delightful to see my former students and postdocs thriving, delightful to be able to meet in person. Thank you to all of them. I hope they continue to thrive as I melt into the background.