Busy, busy, busy – the Pan Am games are here!

As of Friday, Toronto and places near it are officially in the throes of the 2015 Pan Am and Parapan Am Games. And I find myself with (a) a full media photographer’s credential, (b) access to every single competition venue, and (c) a distinct lack of time to take advantage of it.

My involvement is the end of a somewhat confusing story involving my six years of work covering the Toronto IndyCar race weekend, coupled to a relationship with the City of Hamilton, which is hosting the soccer competitions. No, I neither live nor work in Hamilton – told you it was confusing. But I will be at the soccer finals, and some other matches, as well as other events here and there at the venues scattered around the Greater Toronto Area (and beyond), as time permits.

Things kicked off for me back in April, with the unveiling of Team Canada’s uniforms. Produced by the Hudson’s Bay Company and riffing on classic combinations of red, white, black and grey, they were modelled in the CBC’s Glenn Gould Studio by a very photogenic selection of athletes. Even Chef de Mission Curt Harnett busted out some runway moves. 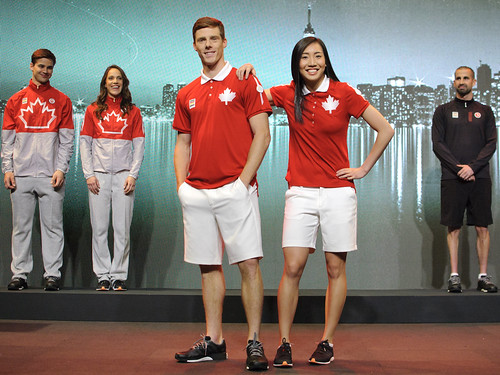 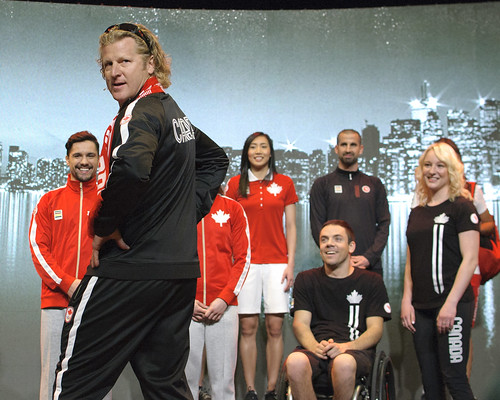 And then a wait, as the credentialing process continued – until the arrival a few weeks ago of my card. One quick trip to the main press centre at Pan Am Park (cunningly renamed from Exhibition Place) and I was ready to go.

But – before the competition, or at least the parts of it I’m photographing – an event closer to home, at least that aspect of “home” that is where I work. On its way across Canada, the Pan Am torch made its way to Toronto’s Hospital for Sick Children, carried for the final 200-metre stint by someone really inspiring: Myles Lynch, a Cystic Fibrosis patient. Next time you’re feeling as though you have difficulties, consider this: last year, he had a double lung transplant. This year, he jogged that torch right into the hospital atrium with a big grin plastered across his face, addressed a huge, noisy crowd of supporters, and hung around for photo ops with anybody and everybody. If you’d like to find out more about how to face adversity with grace, humour and not a small amount of grit, check out his Youtube channel. 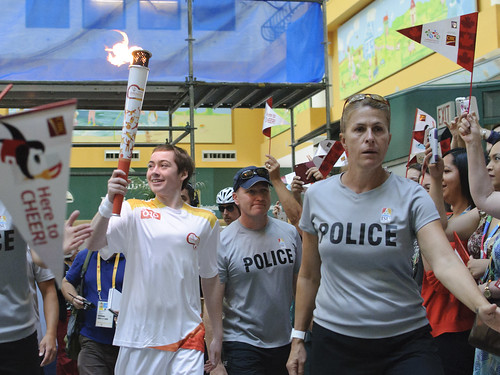 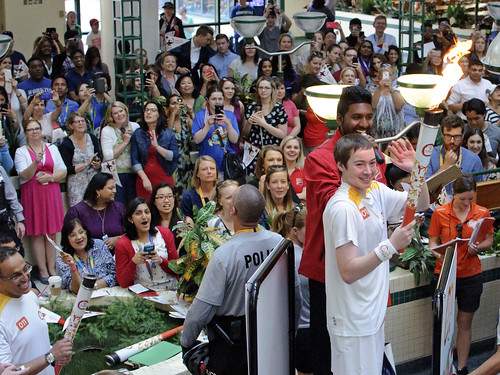 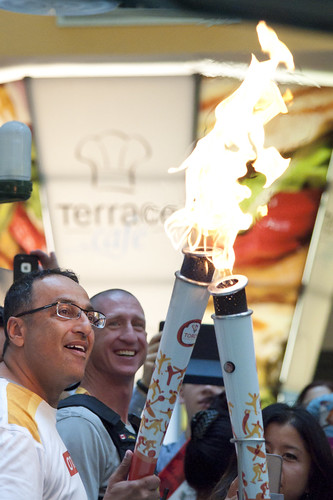 So that brings us to this weekend, where after scrambling a bit to borrow a second camera to replace one that died partway through the IndyCar weekend, I’m finally getting organized to get out and shoot some events. Let’s see how I do with it. In the meantime, I’m happy to point you at some fine examples from my good friend and shooting colleague Chris Tanouye, who was at the opening ceremonies and will be covering everything happening in the swimming pools. Here are some examples from the early  rounds of water polo and synchronized swimming, plus the men’s 10k open water.

I am Canadian by heritage, and a molecular biologist and human geneticist by training. My day job is Assistant Director of a large genome centre, where I do various things along the lines of "keeping the wheels on". In my spare time, I tend to run around with a camera, often chasing horses, race cars, musicians, and occasionally, wildlife.
View all posts by Richard Wintle →
This entry was posted in Hobbies, Photography and tagged Pan Am games, Photography, Toronto. Bookmark the permalink.