What does the Future Hold for Interdisciplinary Research Funding?

UKRI has big shoes to fill. So far it has only just begun to signal its intentions regarding strategic directions: the ‘strategic prospectus’ it published in May was more a road map for developing its strategy than a strategy itself. However, these are important times for UK research and would be even without Brexit-related uncertainty. The Government has pledged to move towards a target of 2.4% of GDP to be spent on research and innovation. A significant proportion of this increase needs to come from industry which, given some of the recent statements from major industries such as Airbus and Jaguar Landrover regarding the consequences of Brexit, must be very much in doubt. Expenditure of this new money needs careful thought. Much of that so far announced by the Government comes in discrete pots: the Global Challenges Research Fund, the Industrial Strategy Challenges Fund, the Strength in Places Fund and the Strategic Priorities Fund. This last does not, as far as I can see, yet have its own webpage but it is about this, rather unheralded fund that I want to talk.

When Paul Nurse and his team produced their review  back in 2015, one of the arguments in favour of the creation of the new supra-research council that has become URKI was the way such an organisation could facilitate interdisciplinary research. This is an area close to my heart. Indeed, when I first started writing this blog, that was the topic I thought would form the basis for the posts of the future. I was wrong, but that doesn’t mean I am not still passionately concerned about how interdisciplinary research is funded. I have repeatedly challenged research councils (mainly EPSRC and BBSRC, since this is the specific (dis)junction where my own research sits, although – as I’ve written before – too often at any of the joins between research councils good proposals can disappear down the cracks) so it is perhaps not surprising I was fingered by HEFCE to chair the Interdisciplinary Advisory Panel for REF2021. The result of this group’s deliberations and proposed criteria will become public shortly as part of the overall draft ‘Guidance on Submissions’ document.

The Strategic Priorities Fund is the overarching fund from which UKRI intend to fund interdisciplinary research. This is not the only strand in the fund’s operation. According to the Strategic Prospectus this fund will:

There is no budget for this fund as yet, with only an ‘indicative’ size of spend given in the Strategic Prospectus, showing that the fund is set to grow in the years ahead to represent a significant proportion of the overall spend from the National Productivity Investment Fund (the figure here is from the Prospectus, p 43). There is no split indicated between the different strands. However, it would appear that significant new money is to be set aside to fund cross-cutting inter/multidisciplinary research. 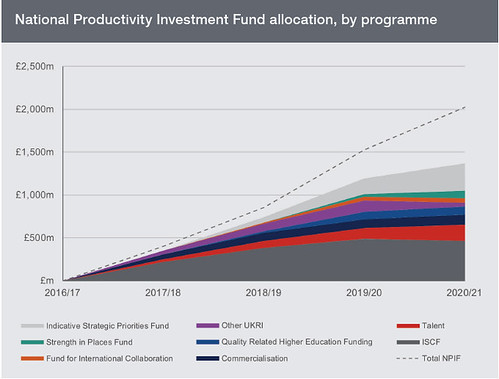 So, I am keen to know how they will set up about doing this and how they will ensure that cracks no longer get in the way of exciting but non-siloed research being funded. What do I think the challenges are?

Firstly there is of course the challenge of what counts as interdisciplinary. Some people make very clear distinctions between the terms multi-, inter- and cross- disciplinary. Unfortunately these neat distinctions seem to vary between communities so that there does not seem to be a commonality of language that everyone agrees on. I will come back to this point below since I don’t think we can simply hide behind Humpty Dumpty’s mantra of definitions that a word ‘means just what I choose it to mean—neither more nor less’. What I certainly don’t  think counts under any of these headings is a theoretical chemist working with an experimental one, or a mathematician and a theoretical physicist writing a proposal. We need the disciplines not to be cognate or even, as I discussed at this week’s ERC Scientific Council meeting where interdisciplinarity was also being discussed, pairings (or more) where people had adjacent offices in an overarching institute – although that might be hard to police.

Secondly there is the question of refereeing. Too often referees of a genuinely cross-cutting proposal only understand part it and, in the face of this challenge, can adopt one of several strategies.

If a proposal is scored by referees familiar with different parts of it and then the whole is averaged  a meaningful overall score is hardly likely to be obtained. However a panel and its chair may feel that is the only possible way to proceed if no one is broadly expert enough to see through this trap. It is for all these reasons that I believe, in the days of single research council’s trying to make decisions about grants at regular panels (i.e. not specific calls where interdisciplinarity may have been explicitly sought), interdisciplinary applications have fared so badly overall. There are undoubtedly areas of success e.g biomaterials engineering, but I think this is because they have been given their own label and sphere in which to operate.

Other domains in which I believe these problems are much less likely to arise are those that are identified with societal challenges. If one considers renewable energy, for instance, I think it is clear that people expect physicists, chemists and engineers (just to identify the most obvious disciplines, but it could also include others such as plant scientists and mathematicians) to come together. The end goal in cases such as these is seen as obviously requiring teams collaborating across the disciplines. It is the fundamental underpinning interdisciplinary research that suffers.

However, where I think many of us whose research sits at research council interfaces have suffered over the years is down to it being decided – and here it is probably down to the grant administrators more than the referees – that the proposal sits outside the particular pot of money that is of interest.  I have had a grant passed from EPSRC – at their ‘request’ – to BBSRC, to the very committee there that I chaired even though I told the EPSRC folk quite clearly that I knew it would fail since I knew full well it had insufficient biology to satisfy the BBSRC panel. The EPSRC folk, in their wisdom, simply told me it had too much biology for them. Result for the grant: failure of course.

One simple aspiration of mine for the Strategic Priorities Fund is therefore very simple: fund those proposals that could not be funded by a single Research Council. This additionally removes the need to define what is or isn’t inter/multi/cross-disciplinary. What would be funded would be the proposals that previously ‘fell down the cracks’ or were batted backwards and forwards in a futile attempt to find a ‘home’. In the past research councils have claimed that proposals would always find such a home and that statement may be semantically accurate. But if a proposal is ‘accepted’ by one council rather than another but is still doomed to failure for totally foreseeable reasons unconnected with the quality of the actual text (as the example I give in my own case), I call that no true home. What will undoubtedly get us precisely nowhere for the new fund is handing money out to individual research councils and telling them to get the system to work. They have had long enough to try and, however much individual councils may want to make this work, I have no confidence we won’t see a reversion to protection over core competencies and hence an infallible route to failure.

If this aspiration were to be met, there would still need to be enormous attention paid to the pool of referees and panel members required. For all the reasons I give above about inadequate refereeing, it could not simply be business as usual pulling in the ‘usual suspects’. But I suspect these are issues that are now well recognized and to identify an appropriate cadre, if thought were given, would not be so hard. They might, for instance, be the same sort of people who will be filling the role of ‘interdisciplinary advisor’ on panels and sub-panels of REF2021.

I have already had an opportunity to discuss some of these issues with the UKRI team responsible for overseeing this fund. I hope I will continue to be able to have dialogue with them. And I hope others will likewise express their views about what would constitute ‘success’ for funding for these non-straightforward grant applications. I am sure the community overall will be watching expectantly.

4 Responses to What does the Future Hold for Interdisciplinary Research Funding?