It is a daily matter to look around a typical laboratory and note the imbalance of the sexes in different roles. In a lab using animals, there may be a fair number of female technicians, but the PI is more likely than not to be a man. In a computer laboratory, women are in short supply at all levels, despite the prevalence of women as ‘computers’ in the early days of the subject. Read Programmed Inequality by Mar(ie) Hicks for a stark description of how the roles of women, in what would now be called data science, were systematically downgraded and men were inserted at the top levels, for instance in the UK’s Civil Service in the 1950’s and ’60’s.

What about the sex of the animals being used? Or the cells? Too often these aren’t recorded. HeLa cells – derived from Henrietta Lacks originally, as described so vividly in Rebecca Skloot’s The Immortal Life of Henrietta Lacks –  are clearly female in origin. So, equally obviously, are another classic cell-line Chinese Hamster Ovary cells (CHO), but too often the sex of the cells and the animals used in life science experiments are unreported. Too often this may matter.

These issues have been highlighted for many years by Londa Schiebinger, leader of the Gendered Innovations project, as I’ve discussed before, and many of them have also been covered in Caroline Criado Perez’s book Invisible Women. In biology and medical matters, the importance of getting this right is clear. Many drugs have been tested on healthy, young male patients and on these alone. Indeed, sometimes it has been argued that women’s hormonal cycles make them unreliable for carrying out such trials, despite the fact that women will continue to have such cycles when using the drugs. The disaster that was Thalidomide unfolded sixty odd years ago, and yet the lessons still are barely learned. I don’t want to turn up at a hospital with a heart attack and be sent home because I’m exhibiting nausea, shortness of breath and dizziness rather than the ‘classical’ symptom of chest pain; but apparently the presentation of heart attacks may be different between women and men. That women have different problems, such as endometriosis, that get very little attention from the established medical profession, mean that they can suffer for years without a diagnosis.

The European Union, through its Horizon2020 programme, has insisted that applicants should ‘integrate, where relevant, sex and gender analysis into research content’, and it most certainly isn’t just in the area of life sciences and healthcare that these issues matter. A new report from Schiebinger’s project was released last week. Gendered Innovations 2: How inclusive analysis contributes to research and innovation. It contains a range of case studies ranging from facial recognition to fair taxation, from making urban planning fit for all to smart energy systems.

The ERC also, and possibly coincidentally, hosted a one day symposium on Sex and Gender Dimension in Frontier Research last week, again covering a wide range of topics. The videos of all the sessions can be found through the link to the conference. The session considering the importance of thinking about gender issues in algorithms and AI really struck home. There are so many ways in which designers are liable to introduce bias into programming that then lurks beneath the surface, perpetuating the failings of people. Failings that are probably easier to spot in real life than hiding in an algorithm, and yet even then they are frequently ignored. The issues about facial recognition software, and their failings in particular over identifying faces of those with darker skin colour, have been well-documented, including the dangers when used for profiling. Intersectionality – for instance in the case of women of colour – may compound these inherent problems.

But there are wider issues about data-driven decision making, problems which may arise from the initial data collection – are all genders and skin colours collected equally for instance – and also from the modelling based on that data, skewed or not. Additionally, biased assumptions may be made about what is ‘appropriate’, as in the case of the demographic targeting of advertisments by algorithm. Studies have shown, for instance, that women are less likely to be shown adverts for highly paid jobs than men and – although some improvements have been made – images for scientist etc on search engines were initially overwhelmingly white and male, typically of Albert Einstein.

Those involved in designing software packages, machine learning etc need to be constantly reminded that biases are subtle and pervasive. Policy makers also have a role to play in driving change. And it was for that reason that, at the end of the ERC day’s programme, I was asked to lead  a discussion with two MEP’s – Marc Angel (Luxembourg) and Lina Gálvez Muñoz (Spain) – the video of which can also be found at the conference site given above. I will admit I found conducting such a conversation via Zoom was a challenge. That platform didn’t lend itself well to the normal give and take of such a discussion, the more so as Marc had to absent himself on important Parliamentary business for part of the discussion, at which point the ERC’s Acting (and former) President Jean-Pierre Bourguignon joined us, sharing his experiences.

I do feel – as I’ve written before – that the ERC has itself set a sterling example of how to collect longitudinal data to examine gender statistics in their grant funding. The graphs below show how, after taking a variety of steps to ensure fairness at every stage of the process, success rates for men and women are (in Horizon2020) essentially indistinguishable, something that was certainly not the case in the earlier Horizon programme as can be seen. I feel the constituent parts of the UK’s main funder, UKRI have a way to go in ensuring they have both the data and the processes to demonstrate the same satisfactory endpoint. Over the years, the different Research Councils have been tardy in data collection and, as I wrote about recently, I feel collectively UKRI need to do more to reassure the community that their processes are both transparent and fair on a range of fronts.

Policy-makers and funders, as well as individual researchers, all have their own part to play in ensuring that sex and gender are appropriately fed into the design of cutting-edge research programmes, and that fairness in the award of such grants is maintained, with constant vigilance over each stage of any process. 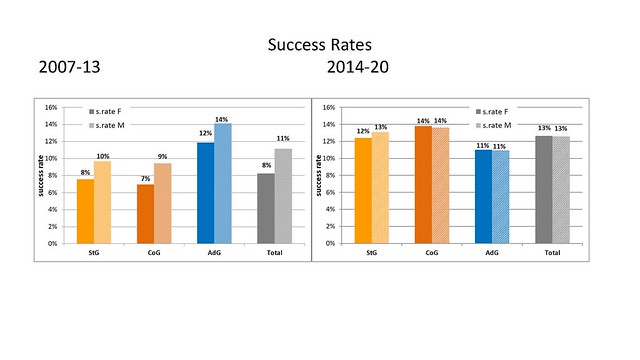