My week, my cultural week, started last Sunday when I found time to catch up with Radio 4’s five-part series on Dorothy Hodgkin, an extraordinary scientist who was brought vividly to life through readings of her letters. Hearing the words created an immediacy that I am not sure I would have grasped from the printed page. If you have not yet heard it, the series is also available as a podcast.

On Monday I stumbled across Cosmonauts: How Russia Won the Space Race on BBC4, a fabulous feature-length documentary, constructed around interviews with the ageing spacemen and women and reels of archive footage that I had never seen before. What incredible risks they took and what stories they had to tell — at least those who came back alive.

I am still not quite sure what to make of Brian Cox’s latest televisual outing, Human Universe. There’s no doubt that it is sumptuously made, with a cinematic sweep to match the ambition of the story that is being told, and punctuated with Cox’s signature enthusiasm. The chase to locate the landing site of the Soyuz capsule just descended from the International Space Station was a particular delight and the final shot in the first episode of the ancient obsidian spearhead being laid on the snow beside the charred spacecraft was a powerful moment of weapons-grade symbolism.

My problem is local, I think. It’s me. I’ve heard a lot of this story before although, to be fair, the series is drawing on recent research — for example on models of how orbital wobbles may have provoked evolution in new directions — and, quite reasonably, it hasn’t been made with the professorial likes of me in mind. Henry Gee, late of this parish, took great exception in the Guardian to the perceived human exceptionalism of Human Universe and provoked a noisy argument in the comment thread. I take Henry’s point about the lack of a clear narrative in human evolution — I admire his book, The Accidental Species — and the dangers of seeing humans as something apart from the rest of creation, but I didn’t hear those notes so loudly in Cox’s delivery and am perhaps more forgiving of the limited scope of sixty minutes of television.

That said, I fared a little less well with the second episode which grappled with the question of why we are here — how is it that the laws and constants of physics permit a universe that will support life? The revelation that the laws that govern the universe are considerably simpler that those of cricket was cute if not entirely convincing. I got the essence of the big idea, that an infinity of multiverses must eventually produce one that is just right for life but, dammit, why must physics be so strange? I guess I can’t blame Professor Cox for that.

I got a firmer grip on multiverse theory when I watched Particle Fever, my second feature-length documentary of the week. Directed by Mark Levinson and edited by the legendary Walter Murch, Particle Fever gave a riveting account of the theory and practice of the hunt for the Higgs boson at CERN’s Large Hadron Collider. The whole quest — and even the theory — came alive through the cast of characters that the film tracked through the tortuous and dramatic early years of the experiment. I was captivated. The film is higher level than Human Universe but by focusing on a single question manages to remain accessible.

Things took an analogue turn on Saturday afternoon when I went to Tate Britain to see the Late Turner Exhibition. I admired his sea-scapes at the National Maritime Museum back in January and was no less impressed by this collection. There were burning skies aplenty. I particularly liked his pictures of Venice and Rome but it was an especial joy to see him capture light and feeling in watercolours painted on his many trips to Europe. On these visits friends would marvel at his industry. It is as if he had to feel the world pouring through his eyes and out through paint and charcoal and ink onto the page.

Not every work appealed. I struggle to connect with the paintings based on stories and heroes from classical antiquity. Other works, formatted into circular or octagonal frames seemed forced or gimmicky. I was relieved therefore in the penultimate room to come across a selection of his sea pictures, including one of my favourites, Waves Breaking against the Wind. 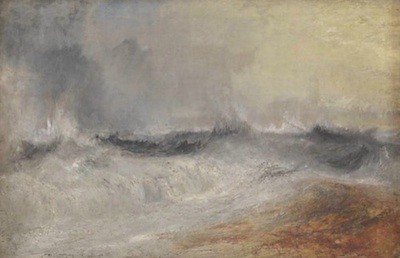 On first viewing I had been puzzled at the yellow colour that Turner used for the sky. At the time I wrote, “What is it about that wash of yellow at the upper right that is so appealing? I’ve never seen a sky that colour and yet it still has me convinced.” Seeing it again yesterday I suddenly remembered that I had seen a sky of more or less that colour during a trip to Australia in the summer and that I had captured it, digitally. I should have known to trust Turner. 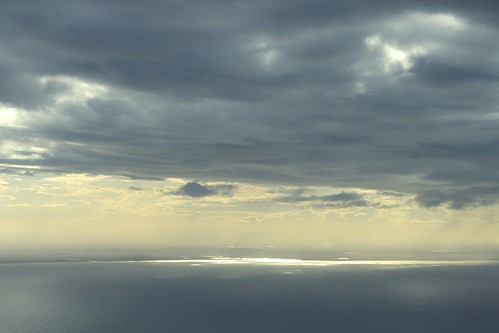 This entry was posted in History of Science, Science & Art, TV review. Bookmark the permalink.