Have you got an ORCID identifier yet? You should. They’re on the rise – and for good reason.

An ORCID iD is a number (mine is 0000-0002-0552-8870) that unambiguously and persistently identifies you in the digital world of academia. It ensures that your research activities, outputs, and affiliations can be easily and correctly connected to you. They are currently used by over 200 research and workflow platforms to identify and connect researchers with their grants and papers, at universities and research institutions, at funding agencies, and at publishers. 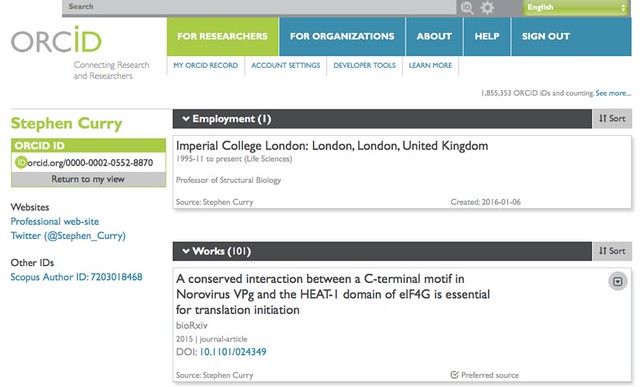 Around the world over 1.8 million researchers have registered for an iD, many in the hope that it will enhance their digital discoverability and reduce their reporting paperwork. Several funders have started to require ORCID iDs as part of the grant proposal process. In the UK, the Wellcome Trust and the NIHR both do, and ORCID IDs are being integrated with Researchfish, the system used by the Research Councils to track grant outputs.

Universities are getting in on the act too. In 2014 my own institution, Imperial College, a created ORCID iDs for  every member of staff who didn’t already have one, unless they opted out. Very few did so.

The number of publishers using ORCIDs is also on the rise. Today a group of eight publishers have announced that, beginning in 2016, they will require authors to use an ORCID identifier (iD) during the publication process. These are AAAS (publishers of the Science stable of journals), American Geophysical Union (AGU), eLife, EMBO, Hindawi, the Institute of Electrical & Electronics Engineers (IEEE), the Public Library of Science (PLOS) and the Royal Society. The Royal Society has been quickest off the mark, making ORCID iDs a requirement for authors as of new year’s day. The rest will follow suit at various dates throughout 2016.

With luck, this move with spur other publishers soon to join in.

In a digital world ORCID iDs make a great deal of sense. Their adoption by institutions and publishers fulfils two of the recommendations made in The Metric Tide, last year’s report of the Independent Review of the Role of Metrics Research Assessment and Management (of which I was a co-author). If we are going to track outputs, we might as well do it systematically and efficiently. I look forward to the day when interacting with Researchfish will be trivial rather than tedious, as at present. In theory, ORCID IDs might even reduce away some of the burden of the ever-unpopular Research Excellence Framework (REF) – though of course we shall have to await the outcome of the government’s re-jigging of HEFCE and the Research Councils before the contours of the next REF become clear. I wouldn’t hold my breath.

Of course by automating the digital tracking of inputs and outputs of ORCID iDs raises the risks associated with   unthinking uses of metrics – something that The Metric Tide was keen to warn against. On that front we need to remain vigilant. But on a personal level, most of us want to be recognised for our work and have an interest in making sure that our published outputs are recorded accurately. The ORCID system also provides handy way of keeping track of your published work. Thanks to the good offices of Europe Pubmed Central, you can use your ORCID iD to follow the open citations to your work. Here, in the interests of transparency, are mine: https://europepmc.org/authors/0000-0002-0552-8870. The profile is perhaps not as complete as that provided through Google Scholar but it is at least open.

If you want an ORCID iD of your own, simply sign up and use the tools to identify yourself and your work (papers, conference proceedings, patents – anything). You can also add your grants, and your education & employment history. For all of the information entered, it’s up to you how much to make publicly visible.

This entry was posted in Academic publishing. Bookmark the permalink.