On Wednesday of this past week I found myself in the presence of royalty and felt quite giddy. It happened at a Royal Institution shindig to celebrate the 80th anniversary of the first televised broadcast of their world-famous Christmas lectures.

As you can see in the photograph below the Duke of York was in the room but that’s not the type of royalty I get excited about. Look closer and you should also be able to pick out Mr David Attenborough. He has no PhD or professorship to his name but can surely be regarded as an emperor of science for all his many contributions in bringing the wonders of natural history into our living rooms. He is rightly regarded in the UK as a national treasure. Even American presidents seek out his presence. 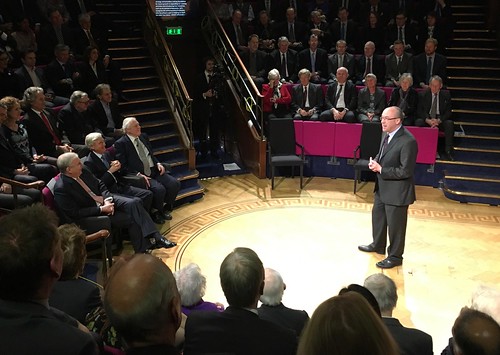 As controller of BBC2 in the 1960s Attenborough had been responsible for inaugurating the regular broadcast of the RI Christmas lectures (though the celebration last Wednesday was to mark the recent re-discovery that the 1936 lectures by Geoffrey Ingram Taylor on Ships had been broadcast live by the fledgling BBC as long ago as 1936). In 1973 Attenborough himself had the honour of presenting the lectures on The Language of Animals.

Attenborough will turn 90 later this year. He is careful in his movements but his mind is as sharp as ever and he spoke with great animation and enthusiasm about his experience of giving the lectures – and their continued importance in stimulating young minds.

In the press of the drinks reception that followed the celebration I managed to buttonhole him and have a few words. I was under instructions from my daughter to snag an autograph but I didn’t have the nerve for that – or to submit the venerable broadcaster to the indignity of a ‘selfie’. What I did do was tell him that, much as I had loved his natural history programming over the years, what I really appreciated was the fact that while in charge of BBC2 he had commissioned a number of landmark documentary series, notably The Ascent of Man and Civilisation (my reviews are here and here).

Though I was aware of both series as a child in the late 60s and early 70s, at the time they were a bit beyond me. But I have caught up with them in the past few years and was delighted to find how well they have stood the test of time – and to have the chance to thank Attenborough for having brought them into the world. He was kind and gracious, and remembered Jacob Bronowski, who presented The Ascent of Man, with particular fondness. I told him how I admired Bronowski’s ability (and that of Kenneth Clark in Civilisation) to speak at length to the camera with a passion and a clarity that was captivating. Attenborough concurred and pointed out that the BBC had been fortunate to be able give such talented presenters the space to perform – each series consists of 13 hour-long episodes. We lamented the pressures that curtail factual programming series in the modern era.

And then, mindful that there must be many others in the crowd at the reception who would want to speak to the great man, I thanked him again and took my leave – my heart a little gladder.

P.S. (Mon 8th March): How could I have forgotten to mention this? One of the particular delights of Wednesday evening was that in a video segment used to show off the work of the RI, there was included a short animated film about crystallography that I had been involved in – as script editor and narrator. After a lifetime of watching David Attenborough’s marvellous programmes on the TV, it was nice that he was presented with one of mine*.

*I say “mine” but of course many other people were involved too!

This entry was posted in Science & Media. Bookmark the permalink.

3 Responses to Meeting David Attenborough at the Royal Institution