How to look at Art?

I was sneered at on Twitter yesterday for sneering at people taking pictures of the Impressionist paintings on display at the Musée D’Orsay in Paris. 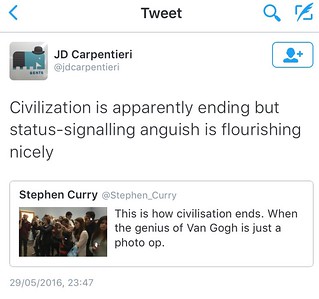 Fair enough perhaps. I had adopted an exaggerated version of the pontifical tone that comes so readily when composing tweets and not everyone saw the funny side. But behind my mock outrage was a genuine note of annoyance.

I don’t have a strong objection to people taking pictures. Indeed I took a few myself. But it was odd to observe those who only took pictures. Those who paused in front of a work with their smartphone or tablet or – more rarely – an actual camera just long enough (quite a while in some cases) to focus and compose the shot before moving on.

Thankfully these were a minority. But then there is the crowd that does not know how to turn off the flash on their phone, or the red light that some cameras use to aid focusing or the fake shutter noises that digital devices insist on retaining as a default setting. As a result, even if you can mentally block out the phones constantly being thrust into you peripheral field of vision, the viewing experience is degraded by random illumination and manufactured mechanical noise. It is a marked change from a couple of years ago. 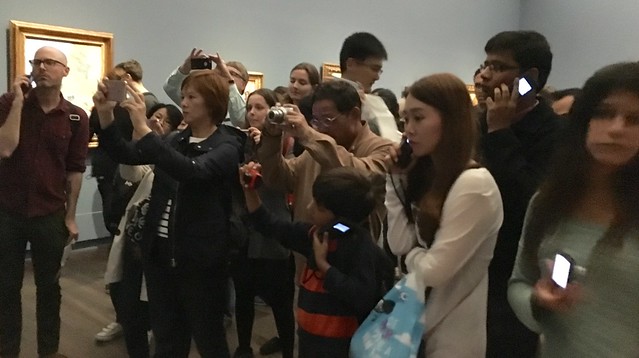 Our guide book had advised us that photography was strictly forbidden at the Musée D’Orsay in order to prevent bottlenecks forming in what is clearly a popular attraction – we had queued for 40 minutes to get in. This seemed like a sensible restriction, one that serves a greater good.

But clearly the museum has abandoned this policy, ceding defeat to the inexorable rise of digital technology. This technology is undoubtedly a boon in many other areas of life but I wish the museum managers had found a better accommodation, perhaps allowing photography during a happy-snappy hour each day. Because much as I enjoyed my visit yesterday, the abiding memory is one of digital interference.

This entry was posted in Science & Art. Bookmark the permalink.

1 Response to How to look at Art?